The Cult of Orphan Black

Ahead of Saturday’s second season premiere on BBC America, the Internet was abuzz at the prospect of the return of Canadian sci-fi drama Orphan Black, which centers around a woman who discovers that she is actually just one of a number — ten to date — of identical clones living around the world with no idea of their origins. The series is fast-moving and, at times, funny, but that doesn’t quite explain the fervor it has created amongst its fanbase so quickly. What does Orphan Black have that other shows don’t?

“I actually think that Orphan Black captures a lot of the things that make shows like Buffy [The Vampire Slayer] great in a way that Buffy imitators haven’t been able to,” says Lauren Davis, a writer for the science-fiction site io9. “It’s a female-centered show — and I think a lot of people underestimate how attractive that is for female viewers — with snappy dialogue, complicated relationships, accessible mysteries and a big bad. The characters are larger-than-life, giving the show the kind of escapism you might find in cartoons or action movies, but the relationships between them feel authentic.”

That last part — the believability of the relationships between characters — is something that Orphan Black has over potential competitors like the CW’s The Tomorrow People or Syfy’s Helix. For all that Orphan Black may share in terms of conceptual DNA with those shows, Orphan Black manages to offer soap opera to balance out the melodrama of the more outré content in a more savvy, organic way than its genre siblings. “There is a kind of delicious Desperate Housewives darkness to it, with a bit of heart,” Davis says. “It’s a show that lets you wallow in a sort of stylized violence while also connecting you emotionally to the characters.”

The key to that connection isn’t simply the writing, but the performances — and most important, the performance of Taitana Maslany, the lead actress who manages to juggle ten different characters in a way that seems surprisingly believable. “As an acting showcase for the lead actor, it’s fantastic,” cartoonist Mathew Digges, a self-proclaimed fan of the show, told me. “That’s probably the main reason I’m watching: the appeal and charm of the lead, and the amazing work she does playing different characters.” (Davis agrees, suggesting that Maslany’s nuanced performance gives the show a “you have to see this trick” appeal for newcomers unconvinced by the show’s concept.)

Maslany is certainly important to Orphan Black, in ways that go beyond her impressive portrayals. She’s literally the face of the show — promotional campaigns for both seasons have centered around portraits of the actor, trusting that her look alone will be enough to make people sit up and pay attention — and has embraced the role, interacting with fans online and name-checking them during promotional appearances. The online interaction between the show and its fans has been key in building a fanbase as well; the show maintains active presences on both Tumblr and Twitter, tapping into an eager audience ready to share early glimpses at what’s to come. Not for nothing were sneak peeks for the show’s second season debuted online months in advance of the premiere itself; the resultant excitement amongst fans worked to spread the word and create buzz in a way that traditional advertising could never have managed.

In many ways, that attitude toward the fanbase is typical of the show’s status as genre television that has learned from the mistakes (and successes) of others. Like Lost, Orphan Black has an apparently labyrinthine mythology behind it — but unlike Lost, it’s a show that is happy to offer answers to important questions sooner rather than later. Like Heroes, each new discovery appears to point towards a grand conspiracy behind events, but there’s a throughline (and, ultimately, endpoint) to that conspiracy that grounds the series to prevent the kind of messiness and creative tailspin that that series fell into after its first season. More subtly, it’s also a series that learned the lessons of a show like Buffy and keeps its core cast appreciably small. Audiences know very clearly who they can trust and who to care about.

Is Orphan Black the product of genre fans (or at least, viewers aware of genre tropes) who have been smart enough to look at what’s gone before and recognize what worked and what didn’t, then? There’s something neat about that realization, and fitting, as well. After all, what could be better for a show about clones than for its creators to make it from the most successful DNA of all its predecessors? 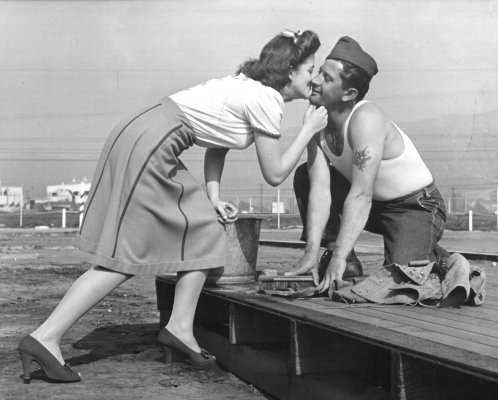 Meet the Actress Who Set Out to Kiss 10,000 Soldiers to Boost Morale
Next Up: Editor's Pick