After cancelling a trip to Asia last October because of the American government shutdown, U.S. President Barack Obama has scheduled a make-up tour in April with stops in Japan, Malaysia, South Korea and the Philippines.

Obama, who once declared himself the U.S.’ first “Pacific President,” will be visiting a part of Asia that illustrates both the economic excitement and geopolitical risk of the world’s most populous continent. Although the tastes of Asian consumers increasingly influence global economics, security tensions between some of the region’s biggest powers have pundits wondering whether military clashes between some of the world’s biggest economies could break out. Defense spending is escalating across much of the continent.

The four nations Obama is visiting are all embroiled in territorial disagreements — some with China, some with each other. These disputes in the East and South China seas have festered for decades but nationalist rhetoric across Asia’s eastern flank has sharpened the potential for armed conflict, even as regional economic interdependence grows.

In late 2011, the Obama Administration declared intentions to “pivot” to Asia, a policy shift designed to wean American foreign policy from its preoccupation with the Middle East and Afghanistan. The U.S. military plans to increase its Asia-Pacific presence, even at a time when overall defense spending is being slashed. Obama is also pushing for the Trans-Pacific Partnership (TPP) to bind a dozen nations together through free trade. Japan’s negotiations to enter the trade pact will surely be a major point of discussion during Obama’s time in Tokyo, especially since political support from Obama’s Democratic Party for his free trade effort appears to be slumping.

The Obama Administration once criticized former U.S. President George W. Bush’s government for undervaluing Asia and not sending high-wattage enough representation to regional meetings. Yet Obama has twice canceled planned Asia visits, once six months ago and another time in 2010. Both postponements came courtesy of domestic politics.

Now, with even the TPP taking blows in Washington, has the Asia pivot lost its punch? Indeed, since its much-heralded debut, the pivot has been rebranded as a rather less vigorous “rebalancing.” Other Administration officials have referred to a gauzy notion of a “Pacific Dream.” Last year while in Tokyo, U.S. Secretary of State John Kerry directly linked this Horatio Alger phraseology to Chinese President Xi Jinping’s own “China Dream,” a fuzzy concept that appears to combine national pride with individual accomplishment. Kerry’s pointed dream analysis wasn’t lost on Beijing, which sees the pivot — or whatever it’s called these days — as an American effort to contain an ascendant China. Even the TPP, which looks unlikely to encompass the Chinese economy, is seen as carrying the whiff of a U.S. power play.

Kerry is again visiting the region this week in what can loosely be considered an advance tour for Obama’s April trip. The U.S. Secretary of State’s first stop on Feb. 13 is South Korea, then China the day after. In both places he will doubtless discuss the foreign-policy conundrum that is North Korea, as well as the icy relations both countries share with erstwhile wartime occupier Japan. Kerry next heads to Indonesia, where he will discuss climate change in a sprawling island nation particularly susceptible to environmental shifts.

On his visit to Japan last April, Kerry noted that “our Pacific Dream is to translate our strongest values into an unprecedented security, economic, and social cooperation.” He listed “our network of alliances with Japan, South Korea, Australia, the Philippines, and Thailand.” Shortly before Kerry began his latest Asia trip, a State Department official cautioned against “provocative actions” by China in relation to regional maritime quarrels. The tone was admonishing. Analysts in Beijing wondered if U.S. ally Japan, which has itself sounded the nationalist bell in territorial spats, was somehow being let off the hook by Washington. If nothing else, it’s worth noting that one Asian power — in fact the Asian power of the early 21st century — won’t be part of Obama’s April Asia tour. That would be China. 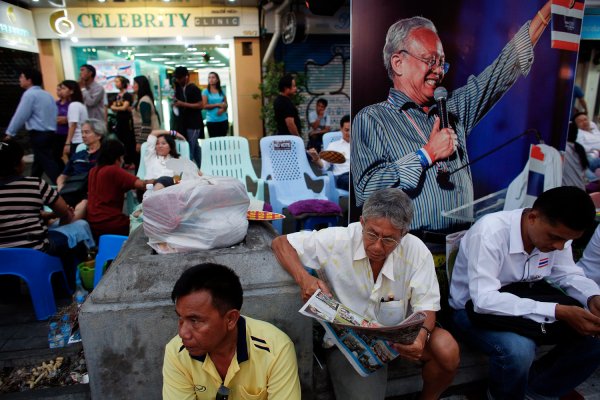