Anti-government protesters enjoy a massage and read papers near a picture of protest leader Suthep Thaugsuban in an occupied area, in downtown Bangkok Feb. 6, 2014
Athit Perawongmetha—Reuters
By David Stout

“This case is over,” Wiratana Kalayasiri, head of the opposition’s legal team, who filed the petition, told AFP. “But if the government does anything wrong again, we will make another complaint.”

The decision effectively upholds February’s snap polls with one stroke, but it was not a complete victory for Thailand’s first female premier as the judges also declined to take punitive action against anti-government protesters for disrupting the voting process.

“It’s not as if the Pheu Thai’s case was a slam-dunk and the court simply, for political reasons, dismissed it,” said Benjamin Zawacki, a lawyer and independent scholar based in Bangkok.

Intimidation and besieged polling stations prevented some 2 million people from casting their ballots, while the Democrat Party boycotted the election entirely. Nevertheless, the court ruled that the protesters had a legal right to demonstrate and lower courts should handle any criminal violations.

“Their reasoning was essentially, ‘yes, the Democrat Party did prevent the polls from taking place, but that’s criminal violation and that should be handled by criminal courts not by our courts,’” adds Zawacki.

The Democrat Party’s petition was based on Yingluck’s failure to hold elections in one day, as is constitutionally required, but Zawacki called this “bad lawyering” based on a circular and overreaching argument, considering the opposition’s key role in blocking the polls.

Antigovernment protests have roiled Thailand for some three months now, during which at least 10 people have been killed and some 600 injured. Protesters want reforms to be carried out to rid Thailand of the influence of Yingluck and her divisive brother, Thaksin Shinawatra.

Analysts say Yingluck may have dodged a judicial bullet, as intervention by the Constitutional Court — an institution largely perceived as favoring the Democrat Party — has previously been used to remove Thaksin-backed governments from office and dissolve former iterations of her Pheu Thai party.

Nevertheless, her administration’s potential legal woes are far from over. Thailand’s National Anti-Corruption Commission is currently investigating the caretaker government over a failed rice scheme; however, an indictment has yet to be filed.

The Election Commission ruled on Tuesday that new ballots will be held on April 27 for those prevented from voting last month. However, there are also 28 constituencies where no candidates stood due to a disrupted registration process; no decision has so far been taken on how to fill these seats. 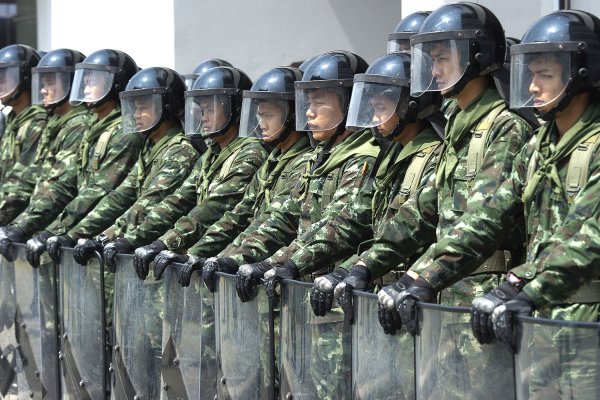 Thailand Was Never the Land of Smiles, Whatever the Guidebooks May Have Told You
Next Up: Editor's Pick