Bongs were ripped, pipes lit and reggae played as Denver residents celebrated the annual 420 marijuana holiday on Sunday, marking the first time the event has occurred since pot was legalized in Colorado earlier this year.

The two-day festival at Denver’s Civic Center Park climaxed at 4:20 p.m. on Sunday when tens thousands of smokers exhaled the now legal marijuana smoke into the crisp Rocky Mountain air and rapper B.o.B. dropped the song “Strange Clouds” on stage.

Attendees listened to myriad musical acts and perused the numerous kiosks hawking everything from Greek fast food to glass pipes during the festival.

“It feels good not to be persecuted anymore,” festival attendee Joe Garramone told the Associated Press.

While the sale of recreational marijuana is now legal in Colorado, smoking marijuana in public is still illegal in the Centennial State. Nevertheless, over the course of the event, authorities reported only 130 citations, 92 of which were for marijuana consumption. 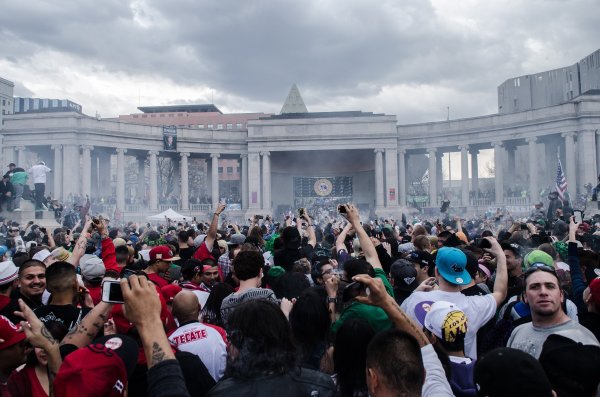 The Controversy Behind Denver’s Historic 4/20 Celebration
Next Up: Editor's Pick