Nepal’s Sherpa community is calling on the government to provide more compensation to the families of the dead and injured after an avalanche last Friday on the slopes of Mount Everest killed at least 13 guides and support staff. Three climbers are still classified as missing.

On Sunday, a meeting was held at Mount Everest’s base camp, during which local guides, climbers and support staff hammered out a list of 12 demands to be met by the government within a week.

“The emergency joint meeting of guides and support staff, expedition leaders and climbers held at the base camp on April 20 issued a seven-day ultimatum to the government to address their demands and threaten to stop climbing if the demands are not met,” read a statement by the Nepal Mountaineering Association published on Monday.

Among the demands sent to Nepal’s Ministry of Culture, Tourism and Civil Aviation, the group called on the state to provide 10 million Nepalese rupee ($103,600) each to families of the deceased and critically injured, along with initiatives to increase the overall support infrastructure for local guides working in the Himalayas.

Sunday’s call to action comes as the Nepalese government mulls calling off the 2014 climbing season on the world’s highest peak. According to the Himalayan Times, a total of 334 mountaineers have been issued permits to attempt to climb Everest this season. If the trips are canceled the Nepalese government is required to reimburse the permits, which cost approximately $10,000 each.

“This is an unprecedented situation,” the Tourism Ministry spokesman Madhu Sudan Burlakoti told journalists, according to the Guardian. “We do not know what to do if they want their tax back. We will hold further discussions before deciding anything on this issue.”

Nepal’s Sherpas are lauded for their ability to withstand high altitudes and are widely regarded as some of the world’s hardiest mountaineers. Members of the ethnic group are the backbone of the Himalayan adventure-tourism industry, where they work as guides, porters and climbers.

The search mission for the three missing climbers was called off at the weekend because of poor weather conditions. 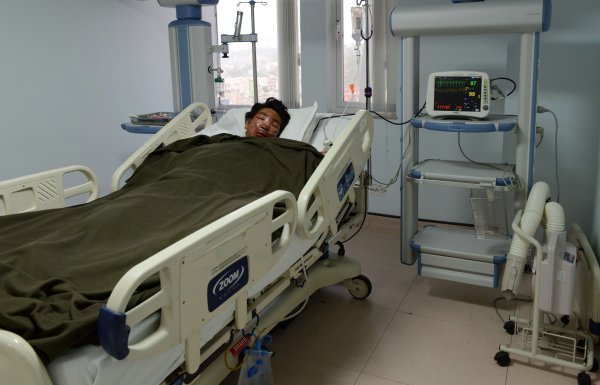 Deadly Day on Everest
Next Up: Editor's Pick