Azalea, 23, raps in a geographically ambitious drawl she’s picked from her idols and stints in various American cities; often it’s a deal-breaker. You can find it endearing or fake. You can admire her studied dedication to artists she loves, or you can dismiss it as white privilege in action. Azalea defends her style as a technical necessity, but a New York Times story about her fashion career suggests a different philosophy at play: “I know how to play the game and get what I want,” Azalea told the paper. “Do you think what I wore to the Chloé show would really be something that I would wear? No. I picked the outfit out myself, because I know it’s appropriate and I know how to pander.” As she warned on her trunk-rattling rags-to-riches tale “Work,” you can hate it or love it.

Or try to love it, at least. Azalea gets brownie points for the gutsy name, but simply calling your record a classic does not a classic make — rather, her debut is a paint-by-numbers exercise in what a modern rap album should be: a song name-dropping brands here, a chilled-out track asking for alone-time and admonishing hanger-ons there. Beyoncé may have hand-picked Azalea to go on tour, but when Azalea demands listeners “bow down to a goddess,” there’s rather little incentive to obey.

In the past year, Azalea found her footing after a few false starts with a solid string of singles that combined the intrigue of her origin story with hefty beats from producers like The Invisible Men, who handle most of the tracks here. After discovering Tupac as a teen in small-town Australia, Azalea (born Amethyst Kelly) dropped out of high school, saved up money working dead-end jobs and told her family she was going on a vacation — then never came back. The autobiographical “Work” is by the far the best thing she’s done, and it’s no coincidence that The New Classic‘s strongest material — the T.I.-assisted “Change Your Life,” the guns-blazing opener “Walk the Line” — also address her unusual American dream with similar conviction and rapid-fire (if at times obnoxiously forced) delivery. But the story wears out its welcome not long after, suggesting she’s perhaps already run out of things to say on her supposed classic: The platitudes of “Impossible Is Nothing” await whoever didn’t finish putting in their 10,000 hours on Macklemore’s own you-can-do-it-too anthem.

Azalea has said before that she initially resisted making any kind of pop record because she was dedicated to rap. In its final form, The New Classic suffers for trying to have it both ways. Her most successful single to date is “Fancy,” which features a redeeming hook by alt-pop siren Charli XCX and probably owes more of its success to the video’s Alicia Silverstone-approved Clueless homage than to her rhymes. The most likely candidates for future singles aren’t the ones where Azalea attempts a new personal best in words-per-minute, but where she aims for melody (“New Bitch”) or outsources that job to someone else (especially Rita Ora on the “Dark Horse” sequel “Black Widow”). Often, the songs don’t feel like her own.

That may say less about her personal tastes, though, and more about what it actually takes to be a successful female rapper in 2014: Since Azalea dropped her first mixtape in 2011, fans have watched Azealia Banks flounder and Angel Haze bust her way out of release-date purgatory only to bomb. Nicki Minaj’s bipolar sophomore album and success with “Super Bass” and “Starships” reveal industry incentive to be able to both spit a mean 16 and impress Taylor Swift, and Iggy Azalea has more or less said the same herself. “I do believe the reason people group me and Angel Haze and Azealia Banks all in the same category,” she said last year, “is that none of us have had a hit yet, and once one of us has a hit, we won’t be in that same category, and I want to be the first.”

You have to hand it to her: the girl’s got ambition. Too bad the The New Classic doesn’t live up to her own hype. 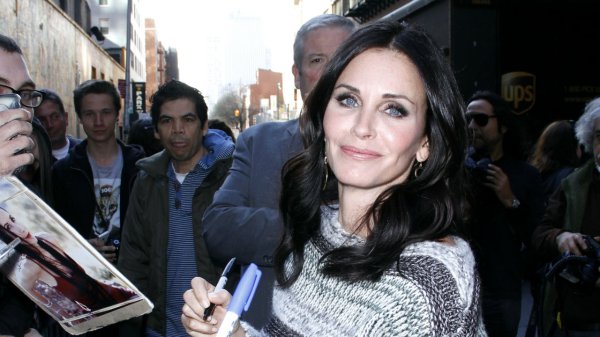 Courteney Cox: No Friends Reunion In Sight
Next Up: Editor's Pick