Wendy Davis Is No Ann Richards

Wendy Davis was always facing an uphill fight in her bid for the governorship of Texas, that reddest of red states. Nonetheless her entry into the race was hailed by the state’s Democrats as game-changer, a tide turner. She had become national star thanks to a 11 hour abortion rights filibuster in the Texas senate. And the party hoped she could tap into Texas’ longstanding fondness for strong outspoken and, yes, attractive women. The key to her gubernatorial campaign was to engage suburban women voters much as Ann Richards, the last and legendary Democratic governor did –hence the shorthand bio that told the tale of a bright, hardworking mom who climbed out of the dust of a Fort Worth trailer park to earn a spot at Harvard Law and launch a career.

With that inspiring Texas-style feminist fairy tale, Davis hoped she would be thought of as sprung from the same psychic soil as Richards who famously once said: “After all, Ginger Rogers did everything that Fred Astaire did. She just did it backwards and in high heels.”

But in January, that way too easy version of Davis’ early life fell afoul of fact-checkers who found discrepancies in the dates of her divorce and called into question what kind of mother she was while in law school. After two weeks of media skewering Davis’ story, which Davis blamed on her likely opponent, Republican Attorney General Greg Abbott — a claim rejected by him — Abbott is saying it’s time to move on. But the damage may have been done.

Post “trailergate,” even friendly forces are losing faith in Davis’ ability to manage her communications team and to woo the suburban women who should be drawn to her bootstrapping biography. The Texas Observer, a longtime progressive stalwart publication, has chided the campaign for mismanagement of its media operation, and said it was hurting her candidacy.

Campaign operational changes are expected, but getting women to see her as the next in that long line of tough Texas female politicians, may be harder now. Texans have had no qualms about voting sassy, strong, but usually centrist, women. Whether Davis, whose sudden national debut included a Vogue profile that revealed she loves Louboutins and Miu Miu heels and whose filibuster wardrobe included an Escada coat, is cut from the same cloth is the question. The first woman elected to high office was Miriam A. “Ma” Ferguson who, in 1925, succeeded her husband who had been impeached. The genteel, educated Miriam cast aside her chic hats and became “Ma” who posed with the chickens wearing a borrowed sunbonnet. Her slogan: “Me for Ma, and I ain’t got a durned thing against Pa” summed up the two-for-one approach that won Ferguson two terms.

But it was in the last three decades of the 20th century that women stood tall on the Texas stage. They include: Republicans Kay Bailey Hutchison and Susan Combs; Democrat turned Republican turned independent Carole Keeton Rylander Strayhorn; Democratic Congresswoman Barbara Jordan who left the statehouse as the first African-American state senator since 1883 and went to Washington to make her mark; and the legendary Ann Richards, a Democratic darling and the inspiration for a Davis’ bid.

When Davis was given Richards’ shotgun at an Austin fundraiser earlier this month– the event was closed to many in the press, feeding what has become media dissatisfaction with her campaign — she posed with it and declared the Republicans were “messin’ with the wrong gal” and promised “to kick some ass.” The twang may have been inspired by Richards’ famous Waco accent, but it didn’t pack the same acerbic punch Richards’ one-liners commanded. An example: “I get a lot of cracks about my hair, mostly from men who don’t have any.”

“She should have seen this attack coming,” says Cal Jillson, political scientist at Southern Methodist University, “everyone else did, so the fact that she and her team have handled it so badly is troublesome. She has tried, saying recently that Abbott ‘has messed with the wrong Texas gal,” but it lacks the snarl that Ann Richards or Carol Rylander would have brought to it.”

“One tough grandma” is the way Carole Keeton Rylander Strayhorn labeled herself during her long career in Texas politics — it helped with her image as a tough centrist, and also helped voters struggling to remember her changing surname. Born Carole Keeton, she married a McClellan (mother to four McClellan boys, including Scott, sometime spokesman for President George W. Bush), then a Rylander and then a Strayhorn. Her politics shifted along the way also from Democrat to Republican, as she climbed from Austin mayor to insurance commissioner, to railroad commissioner to comptroller. When she took on a bid for governor in 2006 in a six way race for governor against incumbent Republican Gov. Rick Perry, she ran as a centrist independent.

Strayhorn’s journey mirrored the path for many Texas Democrats. Richards’ win in 1990 marked the last major victory for the party. Once an umbrella party that dominated the state since Reconstruction, Democrats ran the gamut from liberal to so-called yellow dog conservatives.

Richards hailed from the liberal wing, but in her demeanor, and on some issues, she was decidedly tough and Texan. She celebrated her 61st birthday during her unsuccessful bid for a second term with a dove-hunting trip. Guns inevitably play a role in Texas politics and despite Richards’ easy familiarity with a shotgun, her veto of a concealed weapons bill is considered to have cost her votes in her second bid for governor. Davis joined Abbott in supporting an open carry law for licensed gun owners, raising some eyebrows among the Democratic Party faithful, and then suggested cities and businesses could opt out of the law. She also told the Dallas Morning News she would have supported a 20 week ban on abortion if the law had allowed more input from women and their doctors.

“Women who have succeeded in politics have ranged from the calm, even sedate, problem solvers (Kay Bailey Hutchison and Susan Combs) to the more boisterous and gruff (Ann Richards and Carol Rylander),” Jillson says. “What you do not find in Texas, except in some fairly yeasty pockets, are feminist movement politicians.”

That may be part of the problem for Davis. “Wendy Davis’s strategic dilemma is that she came to broad public attention as a feminist movement politician with her famous filibuster against more stringent restrictions on abortion, but she knows she has to run her campaign on issues like education, roads, and water – mundane stuff that does not scare moderate suburban women away from her candidacy,” Jillson says. “The very effective, but entirely predictable, attack on her life story has stopped her transition from feminist fighter, (so-called) ‘abortion Barbie’ …to moderate, pragmatist and problem solver in its tracks.”

Women have made it to the top in Texas by stressing their problem-solving, practical skills. Richards was a county commissioner, then state treasurer before running for governor. Kay Bailey Hutchison, a University of Texas cheerleader, television news reporter, became a member of the Texas House of Representatives in 1972, where she served for four years, then went on to serve in the federal government, build a business and stay active in party politics, later winning a bid for state treasurer in 1990. She won big in a 1993 special election for the U.S. Senate and throughout her 20-year senate career Hutchison continued to win by overwhelming margins, always over 60 percent.

At one point Hutchison received over four million votes, more than any top of the ballot candidate except President George W. Bush. It was only when she decided to return to Texas and challenge Gov. Perry that her pragmatic approach and somewhat ambiguous views on abortion led her to run afoul of the rising Tea Party.

“One common characteristic that Kay Bailey Hutchison, Susan Combs and Carole Keeton Strayhorn share is all three were considered to be pragmatic centrists,” says Jones. Combs, a six foot tall lawyer with a degree from Vassar, has a resume that includes Wall Street, Madison Avenue, the Dallas prosecutor’s office, a stint in the statehouse, and authorship of a steamy romance novel starring a tall, brainy brunette. She also is a fourth generation Big Bend rancher who took command of the family’s cattle operations when her brother chose a different career path.

Combs took the GOP to task last fall, telling the Washington Times women voters care about three basic things — their families, their jobs and their futures. “Tell me that you give a flip about women’s interests,” she told the paper’s editorial board. “If all you want to talk about is my biology, ‘Gee what happened to my brain?’ That is my point. It is not all south of the waistline.” Combs decided to forego a bid for the lieutenant governorship this year in a Republican primary dominated by four conservatives that has been described by one Texas political wag as a race to the 19th century.

Democrats are hoping that the swing to the hard right will be a turnoff for Texas women. “The 1990 Richards campaign for governor was about suburban women,” Richards top aide Mary Beth Rogers wrote in the Texas Observer last fall. “We developed relevant targeted messages and voter contact activities aimed at moderate suburban women. It paid off on election day.” Citing a June 2013, Texas Tribune/University of Texas poll, Rogers noted only 38 percent of suburban women identified themselves as Republican, compared to 50 percent in 2010. On the other side, self-identified Democratic women increased from 37 percent to 46 percent. However, four months later, the same polling group found while Democratic share of suburban women remained at 46 percent, there had been a surge in Republican Party identification among suburban women to 45 percent, likely due to national issues such as Obamacare — statewide, the poll found more women, 68 percent, than men, 62 percent, opposed to the individual mandate.

As for abortion, the poll found 40 percent of Anglo women supported no restrictions, 41 percent of African-American women in Texas shared that position, but the number slipped to 32 percent for Hispanics. In a June, 2013 Tribune poll, 62 percent of Texans opposed abortions after 20 weeks — the issue at the heart of the Davis filibuster. Unlike the women who have gone before her — Richards, Hutchison, Strayhorn and Combs — Davis is not a familiar face to many Texans, and she does not arrive armed with kitchen table issues. There is no doubt she tackled those issues as a city councilwoman and later state senator in Fort Worth, but it was not her filibuster of cuts in public education in 2011 that launched her statewide bid, but her nationally-covered 2013 abortion rights stance.

A lot has changed in Texas since the early 1990s when Davis struggled to balance family and career, and Richards was winning her place in Texas political history. “The ‘D’ next to Richards’ name in 1990 represented an electoral advantage that mitigated the impact attacks on her for being ‘too liberal,’ ” Jones says. That ‘D’ label is now a disadvantage, one Davis must overcome without the distractions of campaign missteps and fuzzy bios. It is a tall task. “I suspect were Ann Richards running for governor today she very well might face even longer odds than Davis in a bid to defeat Greg Abbott,” Jones added. As for Abbott, campaign finance reports filed for January revealed he had raised a little over $3 million in January and had some $29.4 million on hand, while Davis had raised just under one million and had $10.2 million in reserve. 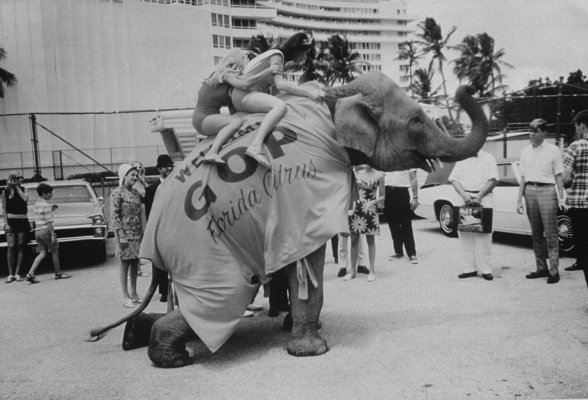 LIFE's Best Convention Photos: The GOP
Next Up: Editor's Pick