A Pro-Russian militant walks near a checkpoint that was the scene of a gunfight overnight near the city of Slaviansk, April 20, 2014.
Gleb Garanich—Reuters
By Simon Shuster

By Sunday morning, all that was left of Ukraine’s Easter truce were two burned-out cars at a separatist checkpoint, a few handfuls of bullet casings, and a bunch of implausible theories that the Russian media swallowed whole and spit back out across the airwaves. A few hours earlier, before dawn, two groups — one apparently made up of pro-Russian separatists, the other of pro-government loyalists — had clashed at the checkpoint near the town of Slavyansk. Reports of casualties differed, the Ukrainian government saying one person had been killed and Russian state media reporting five dead.

In a statement to TIME, the self-proclaimed mayor of Slavyansk, a separatist stronghold in eastern Ukraine, said he was imposing a citywide curfew and sending more of his militants to patrol the streets after the violence. “Last night, at a time of truce and Easter prayer, and in violation of the agreed upon cease-fire, our town was attacked,” the putative mayor, Vyacheslav Ponomaryov, said in the statement transmitted through his spokeswoman on Sunday morning.

Any hope of implementing the peace accord reached on April 17 in Geneva seemed to go out of the window in the wake of the violence. That agreement, which had been negotiated by U.S. Secretary of State John Kerry and his counterparts from Russia, Ukraine and the European Union, had called for all militants in Ukraine to lay down their arms and leave the government buildings they have occupied. Whatever the cause of the violence that took place before dawn on Easter morning, the result was clear enough by daybreak. It gave the separatist forces of Slavyansk an excuse to ignore the peace accord, tighten their hold on the city and ask Russian President Vladimir Putin to send in a peacekeeping force.

“Vladimir Vladimirovich, ours is a small, provincial town,” Ponomaryov said in a public appeal to Putin later in the day. “And fascists are trying to conquer us. They are killing our brothers, carrying out open military actions against the people. We therefore ask that you urgently consider the question of sending a peacekeeping force to protect the civilian population.”

At about 2 a.m. on Sunday, Ponomaryov said, four cars pulled up to a checkpoint about 15 km (9 miles) from the center of the Slavyansk and began firing at the local men who were guarding it. According to the statement from Ponomaryov, the attackers were members of Right Sector, the Ukrainian ultra-nationalist group that has become the favorite bogeyman for Ukraine’s pro-Russian separatists and their allies in Moscow.

“The attackers had the insignia of Right Sector and wore the red armbands inscribed with their swastikas,” Ponomaryov, who calls himself the “people’s mayor” of Slavyansk, said in the statement to TIME. (Right Sector denied having anything to do with the attack on Sunday morning.) “They were found to have night-vision goggles and excellent weaponry, and in their pockets were packs of hard currency, American dollars,” he added. “Our self-defense forces managed to fight them off, using our pistols and the other weapons God has sent us.”

Although the Kremlin has not yet replied to his request for a peacekeeping force, the Russian Foreign Ministry seemed to take the separatist account at face value. “The Easter truce has been broken,” the Foreign Ministry said in a statement. “As a result of an armed attack by the fighters of the so-called Right Sector, completely innocent people died. Russia expresses concern over this militant provocation, which shows an unwillingness on the part of the authorities in Kiev to disband and disarm its nationalists and extremists.”

When TIME visited the scene of the fighting on Easter morning, many of the details in the separatists’ version of the story did not appear to add up. Even though the attackers allegedly unleashed a barrage of gunfire at the checkpoint, there were only a few bullet holes in its barricade of tires. Even though five people were reported killed in the shootout — three local separatists and two alleged attackers — the only traces of blood were on the inside of a camouflage cap left at the scene. But the most apparent inconsistencies were clear from the condition of the two burned-out cars that were riddled with bullets at the far side of the checkpoint leading to Slavyansk.

The separatist fighters, none of whom agreed to give their full names, could not even provide a consistent answer as to why the two main pieces of evidence of the attack had been torched at the scene. Some said the separatist fighters had “fallen into a rage” after the gunfight and decided to burn the cars as a form of emotional release. Another man in civilian clothing, who gave his name as Anton and his age as 27, said he had been guarding the checkpoint at the time of the attack and described a harrowing episode of bravery on the part of his comrades. When the attackers opened fire from their automatic weapons, Anton said, one of the unarmed defenders of the checkpoint ran toward the enemy cars with a lit Molotov cocktail and threw it inside, leading to the conflagration.

According to the separatists, the dead bodies of the two attackers were taken to the local state-security headquarters, which is under separatist control. But the gunmen guarding that building refused to allow TIME inside to see the bodies. The only footage of an alleged attacker’s body was shown on the website of Life News, a Russian channel with long-standing ties to the Russian security services. In its footage, Life News showed what looked to be a corpse with its face and torso covered with a piece of fabric. In the courtyard of the security headquarters, Life News also showed an old German machine gun that looked like it was freshly cleaned, a dozen or so hundred dollar notes scattered on the ground, as well as the alleged business card of Dmitro Yarosh, the leader of Right Sector. All of this was presented as evidence of the separatist account of the attack.

Convincing or not, the Russian state media presented this account as fact on Easter morning and gave it blanket coverage. For the separatists of Slavyansk, it was the best chance yet to convince Russia to send in its military to protect them, as they have long been asking Putin to do. But the chances of that had sharply diminished since the Geneva accord of April 17. During those talks, Russian Foreign Minister Sergei Lavrov agreed that all of Ukraine’s separatists must put down their arms and abandon the buildings they have occupied. In the days since then, there have been no signs of any Russian involvement in the separatist struggle in Slavyansk, and the local fighters and their supporters in Slavyansk have grown deeply anxious that no Russian help is coming.

“After Geneva, we really started to get worried,” Olga Lugavenko, whose son was guarding the checkpoint during Sunday’s violence, tells TIME at the scene. “Putin said that his soldiers had the backs of the local self-defense forces in Crimea last month, and we want them to have our backs as well. But as you can see, there are no Russians here.” The Easter attack, regardless of who orchestrated it, has given Putin a fresh excuse to put boots on the ground in Slavyansk. Now the only question is whether he will take it. 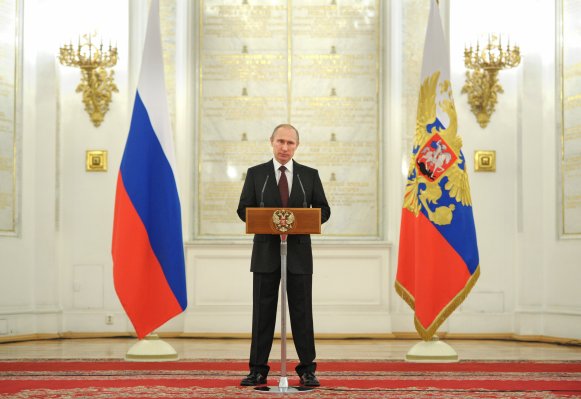 Back in the USSR
Next Up: Editor's Pick