Apple is known for inventing the iPhone and revolutionizing personal technology, but now it is famous for solving one of the enduring mysteries of man’s encounters with the uncanny: it has found the Loch Ness monster.

Or so claim Loch Ness theorists, who point to a satellite image on Apple maps that shows a mysterious shape in the Scottish body of water where the famous monster is said to dwell, reports the Daily Mail.

The image appears to show a large ripple in the water, similar to the wake of a boat. But monster conspiracists see something else altogether. After a comprehensive analysis, enthusiasts at the Official Loch Ness Monster Fan Club have concluded that the figure is “likely” the fabled beast:

“It looks like a boat wake, but the boat is missing. You can see some boats moored at the shore, but there isn’t one here. We’ve shown it to boat experts and they don’t know what it is,” Club president Gary Campbell told the Mail. “Whatever this is, it is under the water and heading south, so unless there have been secret submarine trials going on in the loch, the size of the object would make it likely to be Nessie.”

The image was spotted by two people who noticed it at the end of last year on their phones, who said they were just perusing Apple maps when they found the mysterious image. The map image can only be seen on some iPads and iPhones and beamed by the Apple satellite map app.

So next time you’re on Apple maps, keep an eye out for the Yeti in your backyard. 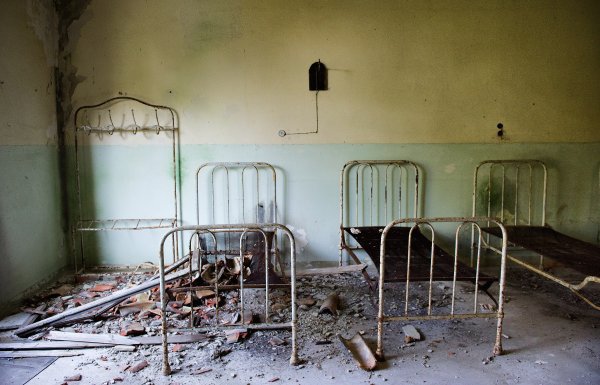 The 'Most Haunted Island' on Earth Is Now Up for Auction
Next Up: Editor's Pick