Topless Photos of Lebanese Olympic Skier Cause a Scandal Back Home

Lebanese skier Jacky Chamoun speaks during an interview at the ski resort of Faraya, northeast of Beirut, March 8, 2013.
Bilal Hussein—AP
By Aryn Baker

Topless photos and racy video footage of Lebanese Olympic Skier Jackie Chamoun have gone viral in Lebanon, prompting a potential government inquiry just days before the Olympic veteran is due to compete in the women’s giant Slalom in Sochi. But government claims that the revealing footage may have damaged Lebanon’s “reputation” have precipitated an enormous backlash in a country that has suffered far worse than the publication of images that wouldn’t look out of place in the Sports Illustrated Swimsuit Issue.

The photos, taken three years ago at Lebanon’s Faraya ski resort as part of an annual Austrian cult calendar shoot featuring male and female Olympic ski instructors, are tame by most calendar criteria—her breasts are concealed by a strategically placed ski or a half-zipped parka. The accompanying behind-the-scenes video (NSFW, to be sure) is more revealing, if chill inducing. The 22-year-old skier-turned model, clad in little more than ski boots and thong underwear, gamely acquiesces to a photographer’s request to lounge in the snow or climb a treacherous-looking icefall. During a brief interview at the end of the 1:38 minute long video, Chamoun admits that it’s much easier being a ski racer than a model because “I’m not used to posing with no clothes on.”

The 2013 calendar was released last year, but the video only surfaced a few days ago, when the local Al-Jadeed television highlighted it in a news broadcast, calling it a “scandal.” The images took Lebanese social media by storm, and the country has spoken of little else for the past few days. Chamoun admitted on her Facebook page to posing for the photos “with other professional athletes”and apologized for offending her critics. But she also implored fans and critics alike to drop the issue so she could ski her best at Sochi. “Now that I’m at the Olympic Games … All I can ask to each of you who saw this, is to stop spreading it, it will really help me focusing on what is really important now: my trainings and race,” she wrote. The post earned her more than 13,000 Likes and an outpouring of support. “Jackie, many Lebanese people including myself would rather see a Lebanese naked beauty than what we see in our country,” wrote one fan. “You have not done anything wrong.”

Faisal Karami, Lebanon’s caretaker minister of youth and sports, was less enthusiastic. According to Lebanon’s National News Agency, he ordered the country’s Olympic committee to launch an inquiry and take all steps necessary to avoid “harming Lebanon’s reputation.” That statement elicited an even greater scandal, as Lebanese across the spectrum ridiculed the minister for his shortsighted take on what really ails Lebanon. In an editorial titled “What Reputation?” the English language Daily Star newspaper lashed out at Karami and Chamoun’s critics. “Since the beginning of 2014, there have been no fewer than six car bombs,” the editorial said. “There is a general lack of law and order, not to mention the lack of a working government. Is there a better definition of a failed state than ours? This woman, who should be a source of pride to the country, … is being blamed for something she chose to do with her free will, while the everyday concerns of citizens are being wholly and fundamentally neglected.”

Lebanon’s online news portal, NOW, was more blunt, placing Chamoun’s pinup alongside an image of a heavily armed man in camouflage under the headline “Boobs over Bullets.” And Lebanese human rights activist and blogger Melkar El Khoury was apoplectic in a recent post: “In a country that is overburdened with debts, embezzlement and corruption, political deadlocks and terrorism, drug and human trafficking, uncontrolled spread of personal weapons, economic decay and unemployment… Jackie’s [rear end] is undermining Lebanon’s image and sending the wrong message?”

Allegations of hypocrisy aside, the “scandal” has caused a bit of head scratching among many Lebanese. Yes, many parts of Lebanon are conservative, but billboards spanning the length of the country’s highways feature cosmetic surgery and laser hair removal clinic ads that reveal almost as much as Chamoun’s photo shoot. While topless bathing is frowned upon at most beach clubs, a summer stroll down Beirut’s seaside corniche offers a wide spectrum of female dress, from ground skimming shapeless black veils to high-heels and hot pants. That tolerance for diversity, forged in the crucible of a 15-year sectarian civil war, is a fundamental part of Lebanon’s reputation as the most liberal and fun-loving country in the Middle East, no matter what crises come its way. The suggestion that an Olympic skier’s brief foray into modeling is a scandal is what undermines Lebanon’s reputation, not the act itself. 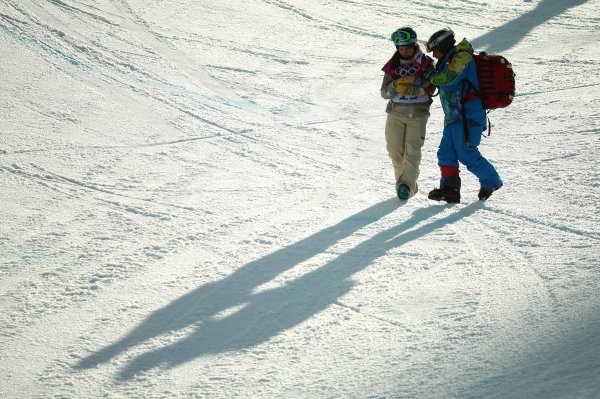 Another Blow to America's Olympic Might
Next Up: Editor's Pick