His manhood stirs rapture in the most experienced and beautiful women. Dr. Parker (Sharon Stone), a luscious dermatologist, calls him “top shelf — hard to reach. That’s what makes you so good.” Selima (Sofia Vergara), a goddess in spiked heels, coos, “You look good … My kind of man.” Avigal, a gorgeous young widow (Vanessa Paradis) who literally weeps with joy at his touch, says, “You bring magic to the lonely.” Even his old friend Murray (Woody Allen) admiringly detects “a different quality. A certain kind of sex appeal. … You’re disgusting in a very positive way.” And the actor who embodies this earthy dreamboat, this irresistible magnet of sexuality, is: John Turturro.

In a three-decades-plus career of more than 70 feature films, including four by the Coen brothers and nine by Spike Lee, the dour-faced Turturro has played crazies and losers, manics and mopers, but not a lot of romantic leads. So he wrote one for himself — Fioravante, a flower-shop employee turned soulful stud — and directed it. Fading Gigolo, a slow, soft comedy, harbors many internal contradictions that, I want to believe, it is aware of and means to have fun with. Even the title misleads: Fioravante may be aging (Turturro is 57) but his sex life is flourishing. And he gets paid for it: usually $1,000, of which Murray, his manager, takes 40%. He often gets a $500 tip; Murray skims 40% from that too.

That Woody Allen, whose controversial family relations often make tabloid fodder, should play a pimp (to Turturro’s self-described “ho”) is just one element of Fading Gigolo that has annoyed many critics. Another is the vanity-production aspect. And a third is the movie’s view of the ladies who love Fioravante. They come in only two varieties: voracious sexpots and demure damsels. Dr. Parker employs Fioravante as a paid lover in order to take revenge on her husband; at the moment of climax she screams, “F— you, Claude!” And Selima, as she sways before her silent stranger, says, “A woman is meant to be looked at. Or else she’ll just fade away.” I thought only men thought that about women; it’s a presumption that has excused many a sidelong glance and full-frontal ogle.

The movie comes dangerously close to validating that cranky Italian proverb: “Every woman is a whore except my mother, who’s a saint.” The widow Avigal, played by Paradis in solemn Marion Cotillard mode, is the movie’s pure mother; she’s had six kids by a domineering man she didn’t love, and Fioravante learns to treat her gently, like a cherished daughter. (Liev Schreiber, as a suspicious cop on the neighborhood watch, hangs around to catch Avigal on the rebound.) Selima and Dr. Parker are the wealthy wantons, somehow needing the gigolo’s favors for all their obvious attractions to other men. “Do you have any idea what goes on inside a woman’s head?” Selima asks Fioravante, who replies, “If I did, I wouldn’t be here.” Turturro may have little more idea than Fioravante does, or Freud did. But he knows what Fading Gigolo should think: that women want to be loved by men. That ignorance cues the movie’s concept of heterosexual bliss.

Sexual politics aside, if they ever are, Fading Gigolo has a wistful tone, and a love of outlandish romance played sotto voce, that connect it less to its star than to its costar. It’s a Turturro take on a Woody Allen film, with jazz, pop and European standards on the sound track and tourist-bus shots of Central Park and Williamsburg (the heavily Hasidic section of Brooklyn where the story is set). Allen has effectively given his approval of the project by appearing in it — just the fourth time in a half-century movie career that he’s taken a credited role in a live-action feature that he did not write. And he plays, more or less, himself.

By which I mean he plays the neurotic, sports- and women-obsessed intellectual from so many Woody Allen movies. When Fioravante asks Murray if he’s on drugs, he says, “Apart from my Zoloft, no.” He mourns against modernity by observing that “Nowadays only rare people buy rare books.” He shows his nerdy lecher side by calling Vergara “a miracle of physics. I don’t know what keeps her up.” He plays baseball with a rainbow coalition of kids (not Mia’s), evoking the name of Kevin Youkilis, one of the few Jewish players in the Major Leagues — once with the Red Sox, now in Japan. As his last line, Murray paraphrases the last line of Casablanca, a movie Allen was so obsessed with that he wrote a modern gloss on it in Play It Again, Sam.

What’s curious is that, speaking someone else’s words, Allen gives his most relaxed, agreeable performance in ages, in a picture with an autumnal burnish and a gentle melancholy. (Maybe Turturro should write the next few Woody Allen films.) Turturro, aware that he is no Pitt, Clooney or DiCaprio, plays Fioravante as strong, quiet, serious — an attentive listener to the sounds of his clients’ hearts and loins. The three female roles may not fit any advanced conception of womanhood, but the actresses slip into them snugly and give every indication of enjoying themselves. If they hated their characters, well, that’s great acting.

Having gone madly ambitious in his delightful urban musical Romance & Cigarettes (2005), the writer-director works on a small scale here — tinier than one of Neil DeGrasse Tyson’s tartigrades on Cosmos. So to recommend Fading Gigolo would be too grand a gesture. But if the movie shows up at your home, as Fioravante does when visiting his clients, you might invite it in. 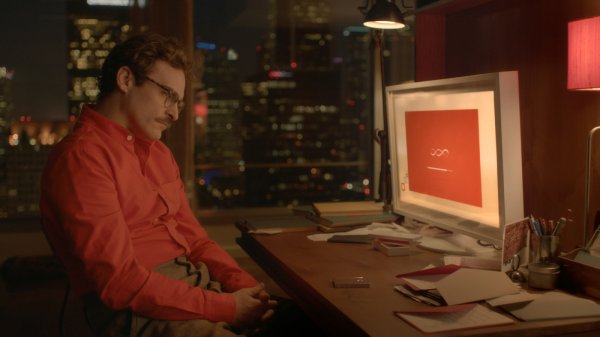 Seven A.I. Movies That Are Better Than Transcendence
Next Up: Editor's Pick