This undated photo provided by the Denver Police Department shows of Richard Kirk. Kirk is being held for investigation of first-degree murder in the death of his wife in their Denver home.
AP
By Maya Rhodan

A Denver man accused of shooting his wife while she was on the phone with 911 dispatchers had eaten marijuana-infused candy before the incident, authorities say.

Detectives are investigating whether the candy had influenced his actions, the Associated Press reports. Richard Kirk, 47, is being investigated as a suspect in the shooting but charges have not been filed. Investigators reportedly found receipts for “Karma Kandy Orange Ginger” and said he appeared under the influence of drugs during an interview. They’re investigating whether there were any other drugs in his system at the time of the shooting.

Kristine Kirk, 44, was shot in the head Monday almost 13 minutes into her call with 911 dispatchers. Police had not yet arrived at the time of her shooting. Throughout the call, the AP reports, Kirk said her husband, who was reportedly hallucinating and asking her to shoot him, had frightened her and her children.

Neither the 911 call nor dispatch records have been released to the public. 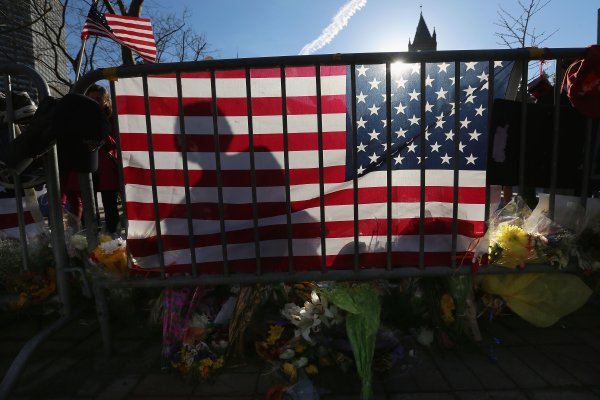 One Year Later, Boston Is Ready to Run Again
Next Up: Editor's Pick