Two million. That’s the global gully, valley or chasm — you pick — dividing Sony’s PlayStation 4 from Microsoft’s Xbox One in unit sales as we round the bend from March to April. That’s a lot of units in the short term, or it’s a drop in the bucket thinking longer-term, where bestselling platforms like Sony’s PlayStation 2 and Nintendo’s Wii went on to push more than 100 million and 155 million units, respectively. [Update: Sony’s 7 million units are sold-through, or to consumers, while Microsoft’s 5 million are sold-in, or to retailers — not a distinction of consequence to my points below.]

It’s vogue to say console sales don’t matter, but those who do are just telegraphing fatigue with the irrational (and unintelligible, and often downright cruel) conversations that erupt on message boards like so much digital effluvium. (Fandom is as fandom does.) But there’s a very sound, perfectly rational reason to care who’s luring hearts and wallets in the monthly numbers, especially if it’s by wide margins. And it’s this: they determine where the games go.

Wii U owners are struggling with this unfortunate reality as we speak (and will increasingly as we roll forward), unable to play multi-platform games like Battlefield 4, Madden NFL 25, Tomb Raider, Metal Gear Solid V, Destiny, Batman: Arkham Knight, and Assassin’s Creed Unity. It’s not necessarily because the Wii U isn’t capable of running downscaled versions of some or all of those games, but because the sales base isn’t there (and doesn’t seem likely to get there soon) to justify spending time and money on ports.

But let’s focus on the PS4 and Xbox One, in view of the latest sales claims, and delve beneath the surface of reductive analyses like “7 million minus 5 million equals 2 million!” That’s an oversimplification, of course, for at least the following five reasons.

Everyone misses this, and it’s easy to see why, since you have to scour the fine print to find it. It’s not clear what the nature of Microsoft’s problem is, exactly — whether it’s manufacturing or regulatory or who knows — but the Xbox One was originally supposed to launch in Belgium, Denmark, Finland, the Netherlands, Norway, Russia, Sweden and Switzerland alongside the 13 countries in this list back in November. Microsoft scrapped those plans at the last minute, and so to date, the Xbox One exists in just 13.

Not all “countries and regions” are equal when you’re talking about potential audience size, of course, and Microsoft’s going to have its biggest bases covered by the time fall 2014 rolls around, raising its total markets figure to 39. In other words, the gulf between 72 and 13 is huge, but 72 and 39 — because we’re talking most of the key remaining ingredients added in that 39 — not so much.

Still, the clock’s ticking. If you’re a game developer, you want to be, as lyricist Howard Ashman put it, “where the people are.” Microsoft’s challenge at this point is as much (or more) about ramping up Xbox One availability as it is landing crucial third-party exclusives or thinking about price drops.

Show me a significantly more expensive game platform that trounced its competition in the long run. Don’t say Sony’s PlayStation 3, because a few million ahead at the end of the marathon’s hardly trouncing. Don’t say the PC because it’s a wildly different animal, and as gaming platforms go, it’s certainly seen better days. Of course, the PS3 had to drop in price dramatically to catch back up to the Xbox 360, and it did, managing to catch and just barely inch past Microsoft’s console in global sales toward the end.

Nintendo’s Wii left everything in the dust during its prime sales years, I’d argue as much, if not chiefly, because of its lower price tag. Microsoft’s Xbox One is $100 more expensive than Sony’s PlayStation 4, and all the shell-game price discounts and bundles and temporary retailer price overrides in the world won’t change the “much more expensive” public perception until Microsoft makes an Xbox One price drop official (perhaps by offering a version without Kinect). Forget all the blather about which platform’s more technically capable (answer: both!), if the Xbox One had launched at $400, we’d be having a very different sales conversation right now.

The point being this: Price is a big deal, and it’s almost surely hurting the Xbox One, as we knew it would. But you could also argue Microsoft selling 5 million Xbox One units at that higher price point is as much an achievement as Sony selling 7 million PS4 units at its lower one.

It’s impossible (for us) to know whether production constraints are impacting these numbers.

All we have are vague claims from Sony and Microsoft and anecdotal evidence provided by retailers, but production constraints could be masking demand (and almost certainly are if we factor regional availability, as noted above).

Sony knows precisely how impacted it is. So does Microsoft. But all they’re sharing are unverifiable vagaries about production issues. And so we’re left to speculate. Maybe Sony’s PlayStation 4 would’ve sold thousands or hundreds of thousands or millions more. Maybe that’s just marketing spin. But the possibility alone means we should be wary of reading these numbers as reflective of actual consumer demand.

Both the PS4 and Xbox One are performing sales feats of derring-do.

Both the PS4 and Xbox One are selling at unprecedented levels. As NPD noted in its March 2014 sales rundown last night, if you add both systems together through their preliminary five months of availability, you’re talking twice the sales of the PS3 and Xbox 360 for the same period. What’s more, if you run the same figure for retail software sales, combined PS4 and Xbox One software is up some 60 percent. You’d be mad to read those kinds of generation-on-generation numbers as bad in any way for either company.

Titanfall wasn’t supposed to change March 2014’s sales figures, but it did anyway.

Anyone paying attention to point number one (as well as Sony’s and Microsoft’s prior global sales figures) knew Titanfall wasn’t going to eliminate the Xbox One’s sales deficit. Imagine Microsoft selling 2 million consoles over the course of 30 days — that’s just wishful thinking unless you’re the Wii and it’s 2007 (or 2008) again. Titanfall‘s a core online-only game for a very specific sort of player. That it took the number one software sales spot for March 2014 despite the PS4’s unit sales lead speaks volumes in an industry where hardware paves the roads and sets up the shipping lines, but where it’s software that ultimately carries the lion’s share of your profits. 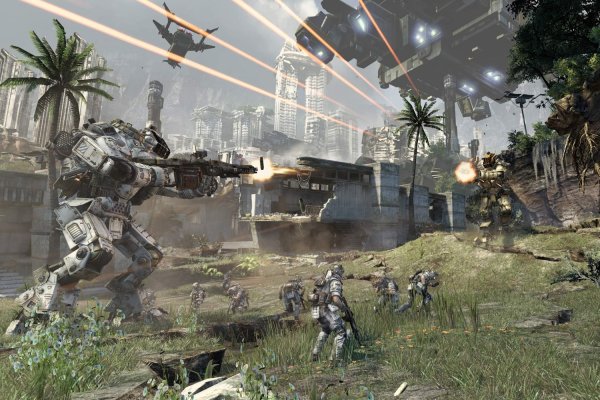