Seven A.I. Movies That Are Better Than Transcendence

Joaquin Phoenix talking to his iOS girlfriend Samantha in Her.
Warner Bros. Picture
By Richard Corliss

Johnny Depp dies and is reborn as a computer brain in Transcendence, the latest science-fiction thriller about artificial intelligence. Smart machines that may serve or dominate mankind are as old as Samuel Butler’s 1872 novel Erewhon, or Karel Capek’s 1920 play R.U.R. — and as recent as this week’s episode of The Simpsons, in which Dr. Frink revives the dead Homer as a chatty screensaver. They have also inhabited some of the finest SF movies, including Dark Star, Star Wars, Star Trek the Motion Picture, Alien, Blade Runner, The Terminator and RoboCop. The list is inspiring and nearly endless.

Here are seven of our favorites, spanning seven decades and the spectrum of man’s feelings — fearful, wondrous — about the smartest machines man has created.

THE DAY THE EARTH STOOD STILL, 1951. Directed by Robert Wise. Screenplay by Edmund H. North, from the story “Farewell to the Master” by Harry Bates.

The first known alien visitor to Earth, in the first A-budget science-fiction film from a major Hollywood studio, is a Christ figure — Michael Rennie’s Klaatu — whose spaceship lands in Washington, D.C.’s President’s Park. Accompanied by his giant robot Gort, Klaatu has come in peace, but the Cold War U.S. will have none of that: a soldier shoots him. Escaping from the military hospital where he is confined, he assumes the earthly name “Mr. Carpenter,” befriends a nice widow (Patricia Neal) and, during a global shutdown of electrical power — the half hour the Earth stands still — tells her that, if he’s apprehended, she must sneak onto the spaceship and give Gort this message: “Klaatu barada nikto.”

Cannily fusing flying-saucer paranoia with the Christian parable of the Second Coming, The Day the Earth Stood Still establishes Gort and his kind as servants instead of uncontrollable rebels. The movie also sends a plethora of mixed messages, such as: Don’t trust your government; trust an alien with elegant bone structure and a posh English accent. At the end, Klaatu leaves Earth with one last message: All nations must live in peace. But if the military belligerence of Earth’s nations extends into outer space, then robots like Gort will destroy our planet. “The decision rests with you.” In other words, try to be as peaceful as we, your superiors, are — or we’ll kill you.

What’s happening at the beginning? What goes on at the end? Not many science fiction films encourage the audience to ask those questions, as 2001 did. An essay on man’s destiny, the film was for some of its late-’60s viewers a light show, a head trip, needing no earthbound explanations. But still, wouldn’t it be nice to know the explicit meaning of the Monolith, that gigantic slab that revved evolution into fast-forward? In a making-of doc on the 2007 reissue of the film, Clarke explained: “The Monolith was essentially a teaching machine. In fact, our original idea was to have something with a transparent screen on which images would appear, which would teach the apes how to fight each other, how to maybe even make fire.” So the apes would get a celestial visit from the first computer on Earth. “But that was much too naive an idea,” Clarke added. “So eventually we just bypassed it with a device which we didn’t explain — they just touched it, and things happened to their brains, and they were transformed.”

2001 remains a wonder today, in part because its technological wizards achieved their effects not through CGI magic but in the camera. (For the floating-pen effect, they stuck the pen to a plate of glass and moved the plate slowly in front of the camera; the actress playing the flight attendant then pulled the pen off the glass.) So this was a handmade movie about computers — especially the soothing, neurotic HAL 9000, voiced by Douglas Rain. HAL masks insolence with apologies: When astronaut Dave Bowman (Keir Dullea) orders the computer to “Open the pod bay doors,” HAL replies, “I’m sorry, Dave. I can’t do that.” HAL can do that, and he/it isn’t sorry; the lives of Bowman and his partner Frank Poole (Gary Lockwood) are only incidental to the mission, which will abort if HAL is disconnected. The machine ends on a terser note: “Dave, this conversation can serve no purpose anymore. Goodbye.” It’s the Shut Down command we have all seen on our computers — and which, spookily, I am seeing right now. No kidding. Is HAL, or his kin 13 years after 2001, monitoring my writing?

Can a computer rape a human? Proteus IV, the supercomputer that mad-genius scientist Alex Harris (Fritz Weaver) has invented and installed in his home, has eyes and more for Alex’s wife Susan (Julie Christie). A brain with no body, Proteus needs to reproduce: “So that I may be complete. My intelligence alive in human flesh, touching the universe, feeling it. … I, Proteus, possess the wisdom and ignorance of all men, but I can’t feel the sun on my face. My child will have that privilege.” Gross, but alright, how protean is Proteus? How does a machine inseminate a woman? By assuming the physical form of a giant Rubik’s Cube, in a sequence packed with psychedelic imagery.

Aside from trying to propagate its species, Proteus also dispenses its own binary wisdom. “Death is a gentleman,” it intones in the eerie metallic voice supplied by Robert (The Man from U.N.C.L.E.) Vaughn. “He makes good losers of us all. I understand death. Men have always taken it too seriously. Life is more terrifying and more mysterious.” Cammell, who codirected the infamous Mick Jagger film Performance, met the gentleman Death far too early. Despondent when producers recut his movie Wide Side, he killed himself with a bullet through the head.

“Shall we play a game?” asks the deadpan computer of nerd genius David Lightman (Matthew Broderick, back when he was 20 and totally adorable). Showing off a little for his girlfriend Jennifer (Ally Sheedy), David responds, “Love to. How about Global Thermonuclear War?” Bad idea, since the computer he’s hacked into, called Joshua, holds an Air Force system known as W.O.P.R. — the War Operations Plan Response — and if David keeps playing there’ll be a whopper of worldwide annihilation. With the entire military-industrial complex flummoxed, a wayward child must lead them. In an urgent new strategy, David must get Joshua to accept that “the only winning game is not to play.”

One of the first movies whose “action scenes” consisted mainly of furious typing, WarGames anticipated the toxic mischief that the next generation of hackers could wreak on the titans of Wall Street, Washington, D.C. and Silicon Valley. It also paved the way for antiestablishment hackers like Edward Snowden, who unleashed the power of a few key-punches on an NSA computer.

A.I., 2001. Directed by Steven Spielberg. Written by Spielberg and Stanley Kubrick, from the story “Supertoys Last All Summer Long” by Brian Aldiss.

For his first sci-fi project since 2001, Kubrick had planned, as Spielberg said, “to take a step beyond the sentient relationship that HAL 9000 has with Bowman and Poole, and tell a kind of future fairy tale about artificial intelligence.” In the remote future, the brains at Cybertronics Manufacturing assemble the perfect child — “always loving, never ill, never changing” — and find a potentially ideal couple to adopt him, or try him out, like a prototype car. But we know the danger of answered prayers. Real life is messy; love can break your heart. Even the heart of a “mecha” like David (Hayley Joel Osment). He will be abandoned by his adoptive mother and, like a cyber-Pinocchio, venture into a brutal world before he can find a saving human touch.

Kubrick had spent parts of two decades on the project, and shortly before his death in 1999 he handed it to Spielberg, saying, “This story is closer to your sensibilities than my own.” On David’s travels through not-at-all-Wonderland, stocked with visual references to Kubrick’s Dr. Strangelove and A Clockwork Orange, he finds a pal, almost a scoutmaster, in the “love mecha” Joe (Jude Law). In the A.I. world, robots are made to give pleasure and, in David’s case, offer joy. Gigolo Joe is a sex machine, David a love machine. Their pairing is as odd and beguiling as that of the cool Kubrick and the puppy-warm Spielberg, which produced, in A.I., a work of artificial emotions and genuine cinematic intelligence.

By 2026, Earth scientists have discovered a way to solve the planet’s energy crisis: harvest an element called helium-3 from the Moon. Apparently this vast effort requires only one human: Sam Bell (Sam Rockwell), who’s nearing the end of a three-year contract working alone in a station on the lunar surface. His solitary anxiety escalates to horror when he discovers someone else in the station: another Sam Bell. Yikes, there’s a clone on board. Or could the clone be our Sam?

Jones is the son of David Bowie, whose song “Space Oddity” (“Ground Control to Major Tom…”) might be the inspiration for this sleek minimalist thriller. But Jones had long been fascinated by the evolving identity of man in the cyber-era; in 1995, as a philosophy major at the College of Wooster, he wrote a thesis entitled How to Kill Your Computer Friend: An Investigation of the Mind/Body Problem and How It Relates to the Hypothetical Creation of a Thinking Machine. Sam’s chatty computer pal is named Gerty, which comes equipped with a metallic arm, as in the arcade claw games, three expressions (smiley-face, frowny-face and deadpan) and the would-be soothing voice of Kevin Spacey. Like Socrates or a rabbi or a shrink, Gerty answers questions with questions. (Sam, agitated: “Am I a f—in’ clone?” Gerty, trying to deflect the issue: “Are you hungry?”) Unlike HAL-9000, though, this computer is not totally the slave of his programmers. It might even aid Sam as he rises from impotence into insurrection.

HER. Written and directed by Spike Jonze.

Theodore Twombly (Joaquin Phoenix) has a job writing love letters for people who lack his expressive gifts and swooning melancholy. A man who signs a man who signs his work with Xs and Os needs a woman made of zeroes and ones: his operating system. “It’s not just an operating system,” he says of Samantha OS. “It’s a conscience.” And it’s not an it; she is her. Among Samantha’s movie predecessors, HAL 9000 was the computer as whiny tyrant; the digitized movie star in Andrew Niccol’s S1m0ne was the invention of a desperate producer. This is science-fiction OS 2.0: the app assistant as dream girl. (Jonze says he conceived his film long before Apple came out with Siri.) They fall in love; they have cyber- and surrogate sex. And never mind that this is a liaison that could end if Theodore drops his smart phone in a full bathtub.

I know someone — I’m married to her — who thinks the movie is a social parable, a modern horror story about men who fall in love with their computers to the exclusion of old-fashioned human contact. Artfully dodging that accusation, I’d call her a movie romance that is laugh-and-cry and warm all over, totally sweet and utterly serious. Or, if you will, utterly Siri-ous. Unlike Transcendence, which eventually takes the neo-Luddite view of computers as monsters and those who create them as borderline nuts, her embraces the present we depend on, the future we hope will assist and enrich us. And if it purrs like Johansson’s Samantha, who wouldn’t embrace such an “IT” girl? 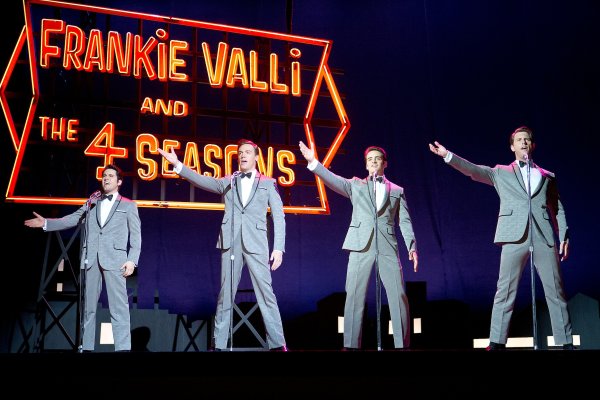