Yellen Says Fed Will Keep Pulling Back on Stimulus

Federal Reserve Chair Janet Yellen said Tuesday that the central bank will continue to scale back its stimulus bond-buying program amid the brightening economic recovery.

In her first public testimony as Fed chair, eight days after formally taking the reins, Yellen pledged to continue the asset-purchasing program charted by her predecessor Ben Bernanke, designed to shore up the fragile economy as it fought through headwinds created by the 2008 recession.

“I believe that I am a sensible central banker,” Yellen told the members of the House Financial Services committee. “These are very unusual times.”

Yellen defended the Fed policy known as quantitative easing, arguing it has tamped down long-term interest rates, stimulated growth and boosted employment. “The objective has been to push down longer term interest rates, and I believe we have succeeded in doing that,” she said.

At the same time, Yellen pledged to pare back those purchases as the economy. The central bank has already begun scaling back its monthly bond purchases, a process known as tapering, as it seeks to unwind the massive portfolio it built up to help keep the economy afloat in recent years. Yellen said the Fed will keep short-term interest rates near zero for the time being, as investors remain jittery about the resilience of the tepid recovery. But she remains bullish on the nation’s gains. “The economic recovery gained greater traction in the second half of last year,” she said in prepared remarks.

The first female Fed chair, who previously served as Bernanke’s No. 2 as well as the head of the Federal Reserve Bank of San Francisco, responded to criticism that her dovish monetary policy could result in inflation.

“I am committed to achieving both parts of our dual mandate: helping the economy return to full employment and returning inflation to 2% while ensuring that it does not run persistently above or below that level,” Yellen told lawmakers, while promising “a great deal of continuity” with programs she helped formulate as Fed vice chair.

Yellen was sanguine about the recent sell-off that caused markets to plunge early this year after months of soaring gains. “Our sense is that at this stage these developments do not pose a substantial risk to the U.S. economic outlook,” she said. “The unemployment rate has fallen nearly a percentage point since the middle of last year and 1-1/2 percentage points since the beginning of the current asset purchase program. “Nevertheless, the recovery in the labor market is far from complete.”

Yellen predicted that “economic activity and employment will expand at a moderate pace this year and next, the unemployment rate will continue to decline toward its longer-run sustainable level, and inflation will move back toward 2 percent over coming years.”

She said she was surprised by the weak jobs numbers posted in January. When the Fed gathers next month, Yellen said, it will assess the economic picture and determine whether to adjust its policies to meet changing economic conditions. 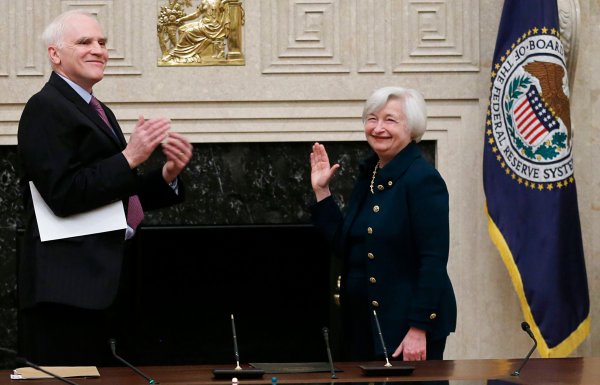 Janet Yellen Sworn In To Lead Federal Reserve
Next Up: Editor's Pick