Billionaire mogul Barry Diller blasted the Obama Administration and the nation’s largest TV broadcasters on Thursday for trying to shut down Aereo, the upstart online video service backed by the media investor. Next week, Aereo will square off against the broadcasters in a landmark Supreme Court case with billions of dollars at stake that could transform the TV business.

Aereo uses thousands of dime-sized antennas to pick up free, over-the-air TV signals, which it transmits to customers over the Internet for a monthly fee starting at $8. The startup has angered the major broadcasters, including NBC, FOX, ABC and CBS, which claim the service is illegal because it’s ripping off their copyrighted TV signals. Aereo hit back on Thursday by launching a website designed to advance its argument that the service is legal.

In March, the Obama administration filed a friend of the court brief supporting the broadcasters and claiming that Aereo is “liable for infringement.” Several well-known public interest and technology advocacy groups have backed Aereo, including the Electronic Frontier Foundation, Public Knowledge, the Consumer Electronics Association, and Engine Advocacy. Dozens of prominent law professors and legal scholars are also supporting Aereo.

Last year, federal courts in New York and Boston agreed with Aereo’s argument that it is transmitting legally protected “private performances” to individual users over their own leased antennas, based on principles established by the important 2008 Cablevision decision, which allowed remote-storage DVR technology. But in February, a federal judge in Utah sided with the broadcasters, intensifying the legal uncertainty surrounding Aereo.

“The networks would like the court to expand copyright law far beyond what Congress intended,” says EFF Staff Attorney Mitch Stoltz. “The networks’ interpretation of the law would strip away the commercial freedom that led to the home stereo, the VCR, all manner of personal audio and video technology and to Internet services of many kinds.”

Diller’s broadside, which was published in a Wall Street Journal opinion piece, accused the TV networks of turning their back on a century-old agreement in which they were granted use of the nation’s public airwaves in exchange for delivering free, advertising-supported TV programming. In recent years, the TV networks have been able to extract billions of dollars in retransmission fees from cable and satellite companies for the right to broadcast their programming.

“Broadcasters make more money when consumers are steered away from over-the-air program delivery and toward cable and satellite systems that pay the broadcasters retransmission fees,” wrote Diller, who is on Aereo’s board of directors. “There’s nothing wrong with that. But it seems rich for them to forget the agreement they made to provide television to the consumer in return for the spectrum that enables their business.”

Diller also castigated the Obama administration for aligning itself “against competition, choice and the consumer” by supporting the broadcasters. “In siding with the broadcasters, the administration has signaled that the preservation of legacy business models takes precedence over lawful technological innovation,” Diller wrote.

The Obama administration’s support for the broadcasters “ignores the government’s own previous legal positions and threatens to outlaw the entire cloud-computing industry,” Diller wrote, echoing a point made by Aereo CEO Chet Kanojia in a recent interview with TIME. That’s because Aereo’s cloud-based DVR service relies on the same legal principles as the entire cloud-computing industry, which enables consumers to store data on remote servers accessible by the Internet.

The broadcasters claim that Aereo’s service amounts to blatant theft, and have warned that if Aereo prevails, they could remove their primetime shows from free TV and move them to pay channels like Showtime. The National Football League and Major League Baseball have threatened to take high-profile broadcasts like the Super Bowl and World Series to cable. Such a move by the broadcasters would “disenfranchise” millions of viewers who rely on antennas to receive TV programming, “just because they want to make more money,” Kanojia says.

Meanwhile, Aereo suffered a setback this week when the Supreme Court announced that Justice Samuel Alito, who had earlier recused himself from the case, will now be able to participate. Oral arguments are set for next Tuesday. (The high court doesn’t comment on why justices do or do not recuse themselves, but it’s often because of stock ownership in one of the parties.)

Alito’s participation gives the broadcasters a boost because it removes the possibility of 4-4 tie, which would have meant that a lower court ruling in favor of Aereo would stand. “With Alito no longer recused, broadcasters now have an additional avenue for scoring that fifth vote,” according to Scott R. Flick, a D.C.-based partner at the law firm Pillsbury. “In other words, it’s easier to attract 5 votes out of 9 than it is to get 5 votes out of 8.” 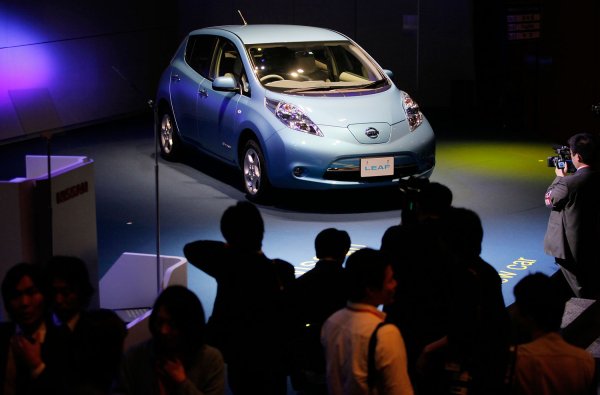 Here Comes the Next Big Push to Get Drivers to Buy Electric Cars
Next Up: Editor's Pick