Scandal Watch: A Child For A Child, The True Explosion In The Season Finale

Beware, spoilers ahead. Because… this is a recap.

Suffice it to say that for the past week Scandal producers have been building an exponential amount of hype, almost to eye rolling proportions, around how insane this season finale would be. “Watch tonight or hate yourself tomorrow,” warned teasers promising, “Twisty, crazy, OMG moments.”

Kerry Washington said that the cast was “floored” over and over again during the table read. Scott Foley promised the Hollywood Reporter a “divisive” final moment that would leave people “up in arms” and cause “Twitter [to] explode. Explode!” So did it live up to the hype?

The end of last week’s episode left audiences with the promise that a literal ticking time bomb was going to go off (with Cyrus’ blessing) during a high profile funeral that could kill Sally Langston, Leo, Andrew (Mellie’s love interest). But that was not the real explosion, so to speak. In the opening minutes Jake warned Fitz, cops were called, and the bomb exploded only after all the main characters were evacuated. Cyrus’ soul is saved. But since this occurred in the very beginning, the end had to be even more dynamic. So the episode was jam packed with twist after twist, reveal after reveal, and the final moment didn’t go out with a boom — like James’ murder — but was rather a culmination of the sociopathy and moral depravity we have come to expect from the cast of characters.

What was the moral depravity? The murder of a child. After the explosion, when Sally Langston is shown making on-site tourniquets, it becomes clear that Fitz isn’t going to win the election. “Dad, I’m sorry you’re going to lose,” says his son Jerry, which become his final words before stepping onstage during a campaign event. Mid-speech, Jerry starts seizing and bleeding through his mouth and nose onstage and in spite of doctor’s best efforts, he dies. We soon find out that he was purposely infected with meningitis. Immediately we are led to believe Mama Pope is the culprit — which, in all honesty, doesn’t make total sense because isn’t her goal to cause havoc and ruin the presidency? While this would emotionally scar Fitz, it would win him an election. So Fitz reinstates Papa Pope/Eli (whose stabbing at the end of the last episode didn’t prove fatal) as head of B613 to take control of the situation and towards the end of the episode we find out that, in fact, it was Eli who killed Jerry. Why? Well Olivia wanted Fitz to win presidency. Eli wanted to regain power. And as for poor Fitz? As Eli put it, incredibly chillingly, “He took my child, so I took his.”

-When Fitz thinks he’s going to lose the election, he tells Liv that he’ll finally divorce Mellie, they can finally get married and move to Vermont to make jam. (If only the biggest scandal in season four could be a huckleberry shortage.) Unable to live in the reverie, Liv tells Fitz that Mellie was raped by Big Jerry. This led to a beautiful scene between Fitz and Mellie where he kisses the top of her head. Mellie tells him that Jerry is his son (“I don’t care,” says Fitz) and that “I fought him” (he holds her.)

-Huck and Quinn get caught having sex in the office. “Oh dear Lord my eyes,” Abby says. The voice of the people. They continue their affair, although Quinn shows Huck where his family, who was taken from him by B613, lives. Which will complicate things. Charlie gave Quinn the address, so I hope they don’t end up murdered.

-Mama Pope is back in a hole underground thanks to Papa Pope (who told everyone she’s actually dead).

-Harrison might get murdered by Papa Pope, the newly instated head of B613.

And then there’s Olivia

-Olivia finally decided to take evil Papa Pope up on his offer of getting on a plane and leaving the country. When Abby (who needs more lines next season) demands to know why, Olivia gives one of the most gripping mini-monologues of the night: “I’m the thing that needs to be fixed. I’m the thing that needs to be handled. I’m the Scandal. And the thing to do with a Scandal is shut it down.” She flies off on a private plane with none other than… Jake.

So what say you? Great finale or was it overhyped? 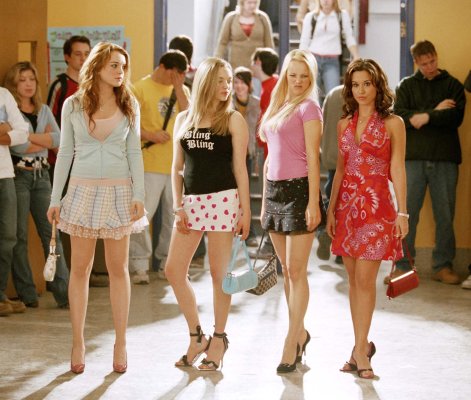 'Mean Girls' Is Not a Comedy. It’s Mythology.
Next Up: Editor's Pick