Charlotte Mecklenburg Police Officers work to assist motorists as they attempt to drive up a hill that is covered in snow in Charlotte, North Carolina Feb. 12, 2014.
Chris Keane / Reuters
By Charlotte Alter

Across the southeastern U.S. Wednesday, hundreds of thousands lost power in their homes and businesses as a winter storm clobbered the region and prepared to head north along the eastern seaboard to drop inches of snow from Washington to Boston.

Throughout the region at least 10 deaths have been blamed on the dangerous winter weather. By 4 p.m., power outages had been reported at more than 300,000 homes and businesses in Georgia and the Carolinas. Roughly 131,000 customers were without power in Georgia alone, as repair crews made labored progress in restoring electricity, the Atlanta Journal-Constitution reports. More freezing rain and up to four inches of snow are expected in the metro Atlanta area through Wednesday night.

Roads in the region are coated with ice, and officials are encouraging people to stay off the main highways. Georgia’s department of transportation commissioner Keith Golden said, “This is a very dangerous ice storm and we strongly encourage the public to stay off the roads unless it is an extreme emergency.”

And people seem to be taking him seriously. “Where you are right now is where you’re going to be tomorrow morning, there’s no doubt about it,” said Mark Arum on the local AM750 News/Talk WSB Traffic Center. In Georgia, the National Guard deployed 400 guardsmen and opened 35 armories to operate as warm shelters.

While Atlanta grappled with its second major winter system of the season, others along the eastern U.S. braced for the impact of the storm. In North Carolina, snow and freezing rain snarled traffic Wednesday afternoon on major thoroughfares, including on I-85, prompting some drivers to abandon their vehicles and head to shelter on foot. Road crews had relieved some of the gridlock by early evening but officials warned conditions were set to worsen as snow turned to freezing rain at nightfall. Washington prepared for 6 to 8 inches through Thursday morning. In New York, Gov. Andrew Cuomo asked residents to avoid travel and advised agencies to prepare “for an impending nor’easter,” CNN reports.

MORE: ‘We’ve Doubled Our Capabilities’ Ahead of the Storm, Atlanta Mayor Tells TIME

Temperatures in the Georgia area hovered around 30 degrees, and are expected to remain below freezing through Thursday afternoon. The entire Atlanta region is under a winter storm or ice storm warning until then. All local bus service is suspended, and trains are running on a reduced schedule. 2,200 flights have been cancelled out of Atlanta’s airport, leaving only 300 flights operating out of the world’s busiest airport Wednesday. Nationwide, 3,276 flights had been canceled Wednesday as of 4:15 p.m. The Georgia Day Parade, an annual event presented by the Georgia Historical Society to celebrate the state’s colonial founding in 1733, was scheduled for Wednesday but was postponed due to the weather. 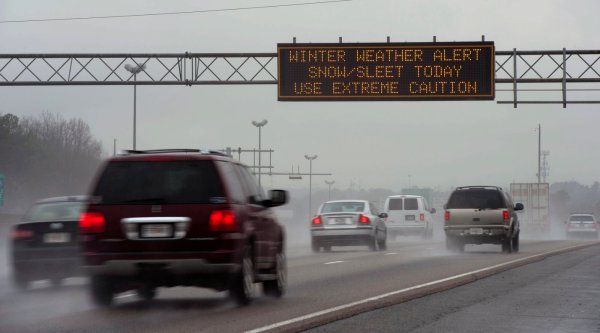