The Biggest Loser Goes Too Far

Twitter exploded after the finale of The Biggest Loser last night when the winner of the show revealed what many consider to be a t00-thin frame.

Rachel Frederickson, 24, began the show at 260 pounds. Last night she weighed in at 105 pounds, setting a show record by losing 60 percent of her body weight. Frederickson is 5’4″, which means her height-weight ratio puts her slightly below the threshold doctors would consider “healthy” according to the BMI scale. The World Health Organization dictates that anyone under an 18.5 BMI is considered underweight, and the fashion industries in Israel, Madrid and Milan have banned models under an 18.5 BMI from walking the runway. Frederickson’s BMI is 18.0.

But even without that information, it’s easy to see that Frederickson looks unhealthy. The show’s trainers, Bob Harper and Jillian Michaels didn’t hide their shock well last night when Frederickson took the stage. If you watch the video (below) or look at the screenshots captured by Twitter users, you can see Harper wincing and Michaels mouthing “Oh my God.” And not in a good way.

The Internet did not receive Frederickson’s transformation well either. Even as Frederickson looked at the hologram of her formerly-overweight self and said, “you are so gross,” people at home were wriggling in their seats at the sight of her now-emaciated body as much as the image of her larger self.

Brandi Koskie, a dieting blogger, wrote, “[A]we turned to shock when millions if viewers at home noticed her frail, skeletal frame…no one has ever looked as frighteningly emaciated as Rachel did tonight.” Others agreed that NBC should be ashamed they pushed a contestant to lose so much weight (and win $250,000) that she no longer looked athletic and healthy but waif-thin.

This isn’t the first time the show has come under fire for pushing people to lose weight by whatever means necessary. Season 3 Biggest Loser finalist, Kai Hibbard, told Jezebel that the show gave her an eating disorder. Neither NBC nor Frederickson have yet responded to criticism, but after this reception it looks like the show will have to be restructured in some way. 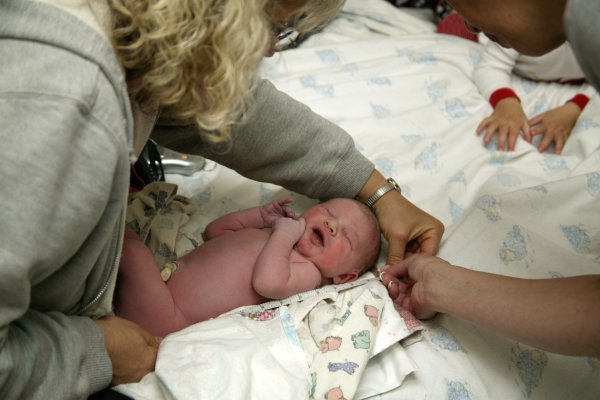 Don't Dump Your Midwife
Next Up: Editor's Pick