HTC One (M8) Review: Pushing Forward with Everything but Hardware

The best things about the HTC One (M8) have nothing to do with the phone itself.

While the hardware is nice, it’s not a major leap over the original HTC One. It has a bigger screen and a faster processor, and its dual-lens camera is sometimes useful, but there isn’t single hardware advancement that will push the industry forward.

Instead, the new HTC One’s most important features are the promises the company has made to its users: HTC says it will keep the phone up to date with the latest version of Android for two years after launch, which is more than what even Google guarantees for its Nexus phones. And if you crack your screen in the first six months of ownership, HTC will repair it for free. Those perks, and others that I’ll explain later, make up for the lack of extra “wow” factor in the hardware.

Aesthetically, I still prefer the design of the original HTC One, a gorgeous phone with slabs of silvery metal sandwiching a layer of white trim. On the new One, a single piece of brushed aluminum wraps around the back and sides of the phone, so instead of seeing nothing but glass over the display, you get a metallic lip surrounding the entire phone. The 5-inch screen is also larger than last year’s 4.7-inch panel, and includes on-screen buttons for home, back and recent apps. Still, HTC has kept the black logo bar beneath the screen where those home and back buttons used to be, making the new One a lot taller than its predecessor.

The new look is more industrial than elegant, but it has some practical points in its favor: The rounded edges are more comfortable to grip, and HTC has managed to squeeze in a microSD card slot this time. And while the longer “chin” under the screen is less attractive, it makes the phone easier to grasp for one-handed use. The larger chassis also leaves room for a bigger battery; I never had trouble getting through long days of heavy use.

Many of the 2014 HTC One’s other tech specs are similar to last year’s model. The processor, a 2.3 GHz Qualcomm Snapdragon 801, is a smidge faster, but RAM is unchanged at 2 GB. (The phone felt snappier to me, but this could have been due to software, or the fact that my original One is bogged down by more apps and media.) Built-in storage is still an extra-generous 32 GB on the U.S. version, and screen resolution is still 1080p. The superb “BoomSound” front-facing speakers are back, but while HTC says they’re louder than the speakers on last year’s One, they don’t sound quite as rich to me. (I wonder if the disappearance of Beats Audio has anything to do with it.)

HTC did bump the front-facing camera up to 5 megapixels, but the rear facing 4-megapixel camera is largely unchanged from last year’s One. HTC continues to argue that more pixels aren’t better, and that its “UltraPixel” technology helps let in more light, but over the last year, other high-end phones have managed to improve their own low-light performance without sacrificing detail. The new One still has fine camera, able to quickly snap lots of good-enough photos in dimly-lit rooms, but it no longer stands out for doing so.

To compensate for the lack of core camera improvements, HTC has slapped an additional lens onto the back of the phone. It won’t make basic photos any better, but it does allow for some impressive focus-based effects. For instance, you can blur the foreground or background of a photo with simulated depth-of-field, or tilt the phone to slightly alter your perspective on the subject.

These features don’t always work flawlessly. With the depth-of-field effect, you might notice some blurring around the edges of your subject, or you might have trouble including your entire subject in the foreground. With the perspective shift effect, images can come out distorted at certain angles. But overall, the dual-lens system works well enough to transcend gimmick status, especially because you can apply the effects to photos you’ve already taken. You don’t have to activate these features beforehand, as you do with single-lens phones that claim to offer similar features.

In lieu of any other big hardware changes, HTC has increased its focus on software. The BlinkFeed news ticker is back on the home screen, with a slicker design and more sources of content. The Sense TV app still allows you to control your entertainment center through the One’s IR blaster, but now it includes social feeds and sports stats. HTC has also given a fresh coat of paint to its email and calendar apps.

As with any non-stock Android phone, some things work better than others. I like that HTC includes a scheduled “Do Not Disturb” feature, and that you can jump into your four favorite apps straight from the lock screen. I’m less enthused about “Motion Launch,” which lets you turn on the screen by swiping from any edge or double-tapping on the glass. It’s far too easy to invoke by accident, and would be better if you could disable individual gestures without turning the feature off entirely. But overall, the software seems cleaner, faster and less obtrusive than anything HTC has shipped before.

And there’s a difference now: HTC has moved all its apps and services into the Google Play Store, where users can download updates directly. This basically allows HTC to deliver new features for apps such BlinkFeed without going through a lengthy carrier approval process, which can hold up core software updates for months. Google already uses a similar strategy for key Android apps such as Gmail and Maps, and it’s gone a long way toward curbing Android’s fragmentation problem. In theory, HTC’s use of Google Play should result in better built-in apps and services, and it’s the one other way that HTC is being more progressive in its approach to Android. (Motorola, under Google’s ownership, has taken the same approach for its software.)

To be clear, the HTC One (M8) is a fine piece of hardware. It has a sharp display, an attractive design and great speakers, and while the camera isn’t the best in its class, it still runs circles around the basic shooters on cheaper phones.

But if anything, the lack of huge hardware improvements only underscores the importance of software and services, and that’s where HTC has made its biggest leaps. Even as the hardware remains trapped in time, the promise with the new HTC One is that phone will keep getting better. 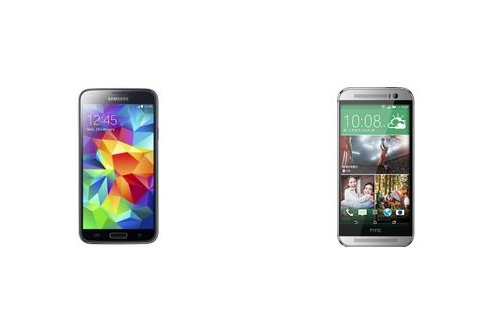