Almost Earth: A Newly Discovered Planet Could Be a Lot Like Ours

An artist's conception of Kepler 186f, with its reddish sun setting over its maybe-ocean.
Danielle Futselaar
By Michael D. Lemonick

When a faulty aiming device crippled the Kepler space telescope last year, NASA officials reluctantly declared the orbiting observatory’s planet-hunting days over—but they also said that Kepler would keep finding planets. That’s not as crazy as it sounds: the probe had made so many observations since its launch in 2009 that scientists hadn’t come close to processing them all. There were sure to be spectatcular discoveries still lurking in those terabytes of stored data, said Kepler’s founding father, William Borucki, of the NASA Ames Research Center.

Turns out he was right: a team of astronomers has just announced the discovery of a planet almost identical in size to Earth, orbiting in the habitable zone of its star—the region where water in liquid form, an essential ingredient for life as we know it, could plausibly exist. Kepler has found Earth-size planets before, and habitable-zone planets, but nobody has ever found a single planet that falls into both of these crucial categories.

“We’ve had a handful of candidates that looked good in the past,” says Elisa Quintana, of NASA Ames, lead author of the paper describing the discovery, which appears in Science. “But we always took them with a grain of salt.” That’s because false-positive detections are always possible in the planet-hunting game. Kepler finds planets by watching for the almost imperceptible dimming of stars as an orbiting world passes in front of them. But other things can cause a very similar signal. The star itself might flicker, or a dark sunspot might slide across its face. Another possibility: a pair of mutually orbiting stars could be sitting almost directly behind the target star, increasing the total amount of starlight that reaches Kepler. When one of these background stars moves in front of the other, the collective incoming light dips—just as it would if a planet eclipsed a single star.

Every candidate planet goes through tests to rule out these possibilities, and in the end, all of those possible habitable-zone Earth-size planets failed. But this planet, called Kepler 186f, passed with honors. “Statistically,” says Quintana, “we’re 99.98% certain that this is in fact a planet.”

They’re also reasonably sure, although not quite as certain, that the planet is made mostly of rock, just like the actual Earth. It wasn’t possible to conduct the definitive observations that would make this a slam-dunk—that is, measuring how much the planet’s gravity makes the star wobble back and forth with each full orbit. If the astronomers could do that, they’d know the planet’s mass, not just its size. Dividing mass by size would have given them Kepler 186f’s density, and thus its composition.

At nearly 500 light-years away, however, Kepler 186f is too distant for that sort of measurement. Still, the best available planet-formation models suggest that the new world is too small to be made of anything but rock. The discovery last fall of Kepler 78b, a somewhat bigger planet that is close enough for the wobble test and is definitively rocky, lends credence to the idea that 186f is too.

Still, there’s one thing about the new planet that’s decidedly non-Earthlike: it orbits an M-dwarf, a dim, reddish star with only about half the mass of the Sun. As recently as a decade ago, few astronomers would have considered such a star a good place to look for life-friendly planets. One reason is that M-dwarfs tend to have lots of violent flares and magnetic storms that spew charged particles out into space. And because these small stars put out less energy than the Sun, their habitable zones are much closer in, exposing planets to a more severe bath of radiation (Kepler 186f, for example, has a “year” that lasts just 130 days, putting it closer to its star than Venus is to our Sun).

Those closer orbits can also place M-dwarf planets at risk of becoming tidally locked to their stars, just as the Moon is to Earth. That means they’ll always show one face to the star; the bright side can therefore be far warmer than the dark side, which could create violent weather that would make life hard to sustain.

But planet hunters have been rethinking all of these factors, and new theoretical studies suggest they might not necessarily deal-breakers. And in this case, they may not even apply: the star that is home to Kepler 186f is relatively massive and bright for an M-dwarf, putting a habitable-zone planet far enough away to be outside the danger zone. Plus, says Quintana, the star has relatively little flare activity. The true measure of Earthiness, of course, would be if Kepler 186f has water on its surface, and more than that, if the water has helped give rise to life. But there’s no way of knowing that from the current observations.

The good news is that there are ridiculous numbers of M-dwarfs in the Milky Way—far more than there are Sun-like stars. There are so many, in fact, that a study concluded last year that if only six percent of them had an Earthlike planet, and if they were spread evenly through the galaxy, that would put the nearest one a mere 13 light-years away. “Astronomically speaking,” said the study’s lead author Courtney Dressing, of the Harvard-Smithsonian Center for Astrophysics, at the time that study came out, “this is like a stroll across the park.”

The even better news is that a newly approved mission called the Transiting Exoplanet Survey Satellite, scheduled for a 2017 launch, could find such nearby planets in droves—and the James Webb Space Telescope, which could go up as early as 2018, could follow up by probing their atmospheres, looking for the chemical byproducts of living organisms.

Kepler scientists, meanwhile, are still looking for a more elusive quarry: a true Mirror Earth, the size and composition of our own planet, orbiting in the habitable zone of a Sun-like star. “Kepler 186f,” says Quintana, “is more of an Earth cousin than an Earth twin.” While scientists can theorize all day about whether life might be possible in the reddish light of an M-dwarf, they know for certain it’s possible on a world like Earth bathed by yellow-white light. “We’re still working hard to find one,” Quintana says. And the fact that Kepler died nearly a year ago isn’t slowing them down even a little bit. 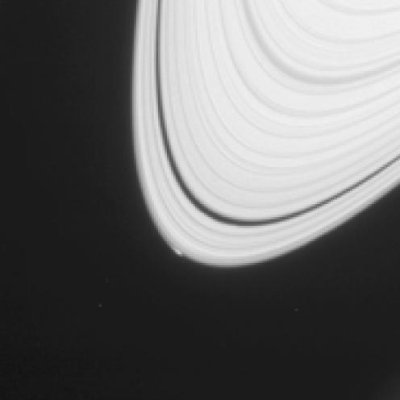 It's a Moon! Saturn Expecting a Baby
Next Up: Editor's Pick