Prime ministerial candidate Narendra Modi has denied keeping quiet over the violent riots that took place in Gujarat in 2002. “I was not silent,” the candidate for the opposition Bharatiya Janata Party (BJP) told Asian News International (ANI) in an April 16 interview. “I have said what I had to say. Now, I am in the people’s court, and I am waiting to hear from them, and their verdict.”

For years, Modi’s rise through India’s political ranks has been shadowed by communal violence that took place during his first year as the chief minister of Gujarat, a post he continues to hold today. In 2002, more than 1,000 people were killed in riots that swept the western Indian state. The majority of the victims were Muslim. Though many have accused Modi, as chief minister, of not doing enough to stop the violence, Indian courts have never found him criminally culpable, and have cleared him of any wrongdoing.

In the dozen years since, Modi’s reputation for effective administration and good economic management have helped put him where he is today: at the helm of the national party that polls suggest will have the strongest performance this election. Many give Modi direct credit for the BJP’s momentum over the past few months. But he continues to face questions about not apologizing for the riots, or to speak during the campaign at greater length about a difficult and polarizing period of India’s recent history. In response to a recent demand from the ruling Congress Party that he apologize, Modi told a local television station that Congress should “account for their own sins first,” according to NDTV.

Modi has said that he was shaken by the violence that took place during his early days in office. In a July interview with Reuters, Modi’s response to whether he regretted the 2002 violence made waves when he compared his feeling for the loss of life to being a passenger when somebody runs over a puppy on the road. “If I’m a chief minister or not, I’m a human being,” he said. “If something bad happens anywhere, it is natural to be sad.”

Modi told ANI this week that he has given up discussing the riots with the media. (In the past, he has walked out of an interview when pressed on the subject.) “I answered every top journalist in the country from 2002-2007, but noticed there was no exercise to understand truth,” he said. He also suggested that the media’s negative attention has, in fact, given his career a boost: “If the media had not worked to malign Modi,” he said, “Then who would known about Modi today?” 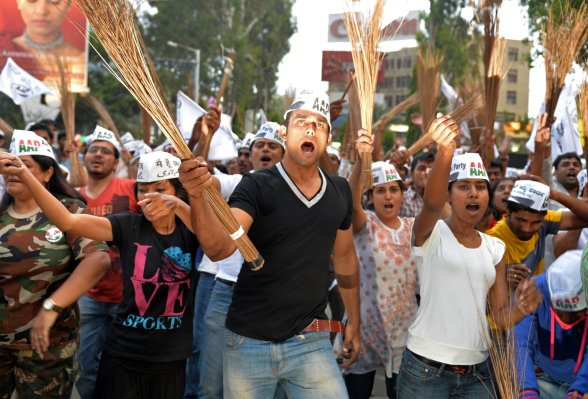