A Bangladeshi judge made history Sunday. For the first time, formal charges have been brought against the owner of a garment factory where workers have died. At least 112 people perished in November 2012 when the Tazreen Factory on the outskirts of the capital Dhaka burned to the ground. Western brands such as Walmart and Disney were amongst those sourcing clothes there.

That Tazreen’s owner, Delwar Hossain, is now behind bars awaiting trial is being treated as a milestone for the Bangladeshi export industry. “The name of the owner is on the charge sheet for the first time as a criminal, the state has managed to recognize that this is not oversight, but this is as an issue of criminal actions,” said Saydia Gulrukh, an academic who has fought tirelessly to see Hossain face his accusers in court.

Memories of that fateful day remain seared into the minds of survivors, most of who have yet to receive any compensation. “We ran from one stair to another stairwell to get out but authorities had already closed those two exit points,” says Mahfuza, an operator working in the factory when the fire broke out. The 20-year-old says she was filling an order for Walmart on the day of the blaze, and was forced to jump from the fourth floor because of the lack of exits.

Local police initially brought charges against Hossain in the immediate aftermath of the blaze, but these were mysteriously dropped. “He was getting some kind of support, so formally nothing came out against him,” said Humayun Kabir a former Bangladeshi ambassador to the U.S. This was despite a Home Ministry report soon after the fire acknowledging Hossain had acted with “criminal negligence.”

However, changing international attitudes to the global garments industry mean that once-powerful figures like Hossain can no long act with impunity. The Tazreen tragedy and the even deadlier Rana Plaza collapse spurred the U.S. to suspend the limited Generalized System of Preferences (GSP) duty free access Bangladesh enjoyed in response to the lax safety standards.

“International pressure definitely influenced [the case],” says Gulrukh. The E.U. had also threatened to revoke its equivalent allowance, deemed a vital boon to the $22 billion industry.

Bangladesh and the U.S. are scheduled to hold a meeting on restoring the GSP in May, which was postponed from December. “The government now wants to show that it is taking some action for the simple reason that by December the hearing for the GSP was supposed to take place,” notes Kabir.

Hossain surrendered to a court on Sunday to face charges of causing death by negligence after a warrant for his arrest had been produced on Dec. 31. His bail plea was rejected and 14 months after the fire he has finally been remanded in custody.

Hossain, “had managed to sidestep the legal process for 14 months, there was always someone helping from the inside, that’s how things happen,” says Gulrukh, who says many victims doubted this day would ever come. “Now workers believe its possible to hold owners to account, this restores some faith in the system.”

When Hossain’s bail plea was heard, he and his colleagues brought along the t-shirts that one of the company’s remaining factories are making, for the 2014 FIFA world cup, to emphasize the importance of the industry to the country. For the first time, however, it seems the lives of those lost have been placed above the profits their toil yields. 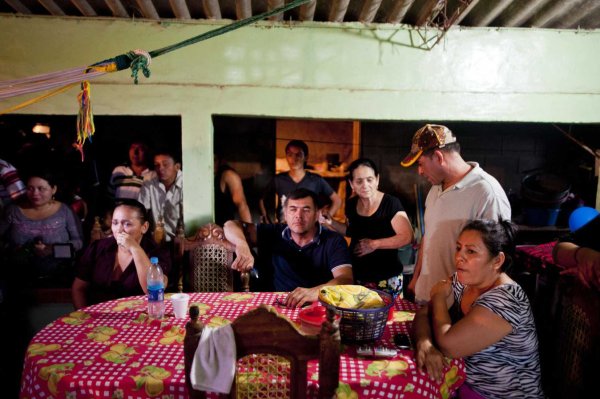 Salvadoran Man Returns Home With Fish Tale of the Ages
Next Up: Editor's Pick