The unlikely story of how Nas went from eighth-grade dropout to one of hip-hop’s most celebrated and intellectual rappers is the subject of the new documentary, which weaves together archival footage, family photos, and interviews with hip-hop legends to explore the behind-the-scenes making of Nas’ landmark debut, Illmatic, which turns 20 years old this week.

Festival co-founder Robert De Niro, who Nas joked “plays me in all his movies,” helped introduce the film, calling it a story “about the making of an artist here in our hometown.” Directed by One9, Time Is Illmatic marks the second time in a row the festival has kicked off with a musical documentary — following last year’s Mistaken for Strangers, about the band The National.

Since its release in 1994, Illmatic has sold more than a million copies and been the subject of multiple books and scholarly works. Critics credit Nas’ poetic wordplay and intricate rhymes with reinvigorating East Coast rap at a time when the West Coast ruled, and the album has since become a gold standard for hip-hop debuts. Time Is Illmatic does its best to show why, splicing clips of Nas’ early performances to highlight the vivid imagery — “I went to hell for snuffing Jesus,” “I’m waving automatic guns at nuns” — that stunned New York producers and attracted record labels’ attention.

Of course, if there were any lingering doubts about the rapper’s talent and charisma after the film, Nas likely settled it with a performance of Illmatic, which also featured a surprise guest performance from Alicia Keys (who briefly appears in the movie). Sauntering on stage dressed in all black and clutching a bottle of Hennessy, Nas breezed through the nine-song set, only stopping between songs to tell stories about the album’s genesis to a theater full of the album’s collaborators.

Consider it his way of giving back. The documentary is a love letter to Illmatic, and it’s also an effective example of how politics and policy can shape art and popular culture. Time Is Illmatic spends far more documenting what happened outside of the studio than inside, providing a quick crash course in the history of white flight, the housing projects, local public education and the War on Drugs to contextualize Nas’ upbringing in the Queensbridge public housing development in Long Island City. In one of several interviews with hip-hop greats, rapper and producer Q-Tip offers a close reading of two lines from the song “One Love” — “Plus congratulations, you know you got a son / I heard he looks like you, why don’t your lady write you?” — to discuss the rampant incarceration of black men that destroyed many of the community’s families in what he calls “an African-American disease.”

Critics hailed Nas’s riveting tales of urban poverty and gang violence as a masterpiece, but on screen, Nas isn’t the most effective storyteller. The raspy rapper is quiet and pensive for much of the movie, leaving the most compelling accounts of the environment that produced Illmatic to others. His brother Jabari, whom Nas later joked was the real star of the film, offers the film’s most sobering moments as well as its funniest: In one scene, Jabari returns to the site of a murder he witnessed and describes the look on a late friend’s face as bullets passed through his body; moments later, he had the audience in fits of laugher after describing how he looked up from the concrete and asked Nas not to tell their mother about what happened.

Director One9 takes care to avoid making Time Is Illmatic an overly simplified story of a projects kid finding salvation in music: The rapper credits the involvement of his two parents with keeping him out of trouble as a child, but he notes that his father, blues musician Olu Dara, later split with his mom and encouraged him to drop out of school to educate himself. The film laments some generational changes in hip-hop, but it also explains the role of the crack epidemic in driving them. Instead of treating each Illmatic track as just another career milestone, the film uses them to illustrate larger points about the borough and the projects, covering years of Queensbridge rap without ever sensationalizing its history of drugs and violence.

In other words, Time Is Illmatic is as much about Nas as it his community, the story of Queensbridge told through one of its greatest artists. The most convincing way to tell the story of the neighborhood, it turns out, is not through its geography — it’s through the music.

“What you speak and put out into the universe,” Nas told the crowd between songs, “it’s real life.” 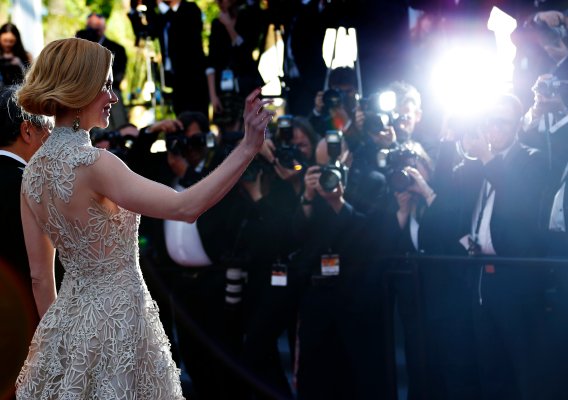 Five Films You'll Be Hearing About from This Year's Cannes
Next Up: Editor's Pick