Move Over Shaun White: The I-Pod Is Here

Shaun White of the U.S. reacts after crashing during the men's snowboard halfpipe final event at the 2014 Sochi Winter Olympic Games, in Rosa Khutor February 11, 2014.
Mike Blake—Reuters
By Sean Gregory

Just as quickly as the Olympics can lift you into the hearts and minds of the masses, they can send your reputation careening down a halfpipe.

Shaun White won’t be longing to return to Sochi anytime soon. First, he decided to pull out of the slopestyle competition, citing the dangers of the course and his desire to concentrate on his money event — the halfpipe. Fellow boarders started chirping: another worthy American could have taken his slopestyle spot, you know? We found out that White, despite the attention — and thus money — he brings to the sport, isn’t all that popular among his peers. Not unlike Tiger Woods, when Woods was winning.

Then, he started griping about the half-pipe conditions. Granted, he was far from alone. But it was Jack Nicklaus who once remarked that as soon as he heard kvetching about a course, he knew he had an edge. White is the Jack, the Tiger of his sport. Now, he was doing the complaining.

White was shooting to become the first American man to win a gold medal in the same event in three consecutive Olympics. On his first run in Tuesday’s halfpipe finals, White fell twice. White went big on his second attempt (in snowboarding, only the top score counts), but it wasn’t smooth enough. He finished in fourth. Iouri “IPod” Podladtchikov, a Russian-born boarder now competing for Switzerland, took gold – how peeved is Putin? — thanks to his signature trick, the “Yolo.” That’s a double flip with four rotations in the air. You only live once dude.

No Yolo, no gold. White’s loss won’t diminish his contributions to Olympic snowboarding. But those Flying Tomato days seem pretty distant. And it seems pretty bizarre to write this: Shaun White, such a sure thing for so long, has actually kinda killed the good U.S. snowboarding vibe. After dual American wins in the new slopestyle event, we’d have White, and then maybe Kelly Clark taking home halfpipe gold in the women’s competition on Wednesday.

Now, there’s a hole in the U.S. medal count. Few expected White not to fill it. 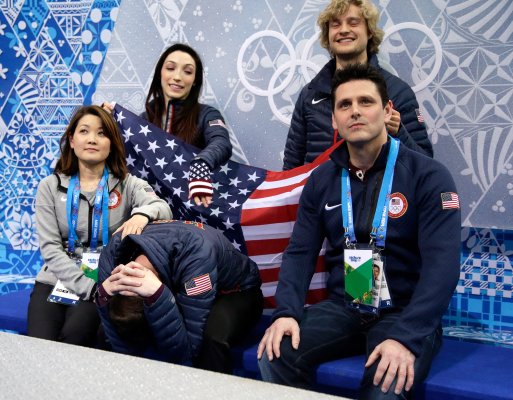 Turning Individual Athletes Into Team Players
Next Up: Editor's Pick