Golden Globes Review: Toastesses to the Hostesses With the Mostesses

Without getting into the whole debate over whether TV is better than the movies now, it’s notable that the Golden Globes—the one big awards show to honor both—comes on Sunday, the night that busily proves how much TV has to offer. If you had skipped the awards last night, you could have watched the current seasons of Golden Globe nominees The Good Wife, Downton Abbey or Girls. Or you could have watched the premiere of HBO’s True Detective, featuring a mesmerizing star performance by Matthew McConaughey, winner of last night’s Best Actor in a Drama Globe.

The Globes, the idiosyncratic choices of the Hollywood Foreign Press Association that grew into a major media event, may or may not be worth anything as actual awards. (Here’s what TIME’s Richard Corliss thought of the movie awards.) But they are first and foremost a TV show. And last night’s show worked once again because of two hosts who know how to do TV, Tina Fey and Amy Poehler.

It’s not just that they had great material, like Fey’s joke that McConaughey lost 45 pounds for his Dallas Buyers’ Club role, “or what actresses call ‘Being in a movie.'” It’s their effortless chemistry, which helped the SNL alums deliver zingers that from another host might have seemed vicious. As before, they brought the Beverly Hilton audience on bits, especially a running gag involving Julia Louis-Dreyfus having gotten too fancy to sit with the TV crowd. And when Poehler got a deserved Best Comedy Actress award for playing Leslie Knope in Parks and Recreation, Fey’s congratulations were warm without being smarmy: “I love you and there’s a special place in Hell for you!”

It’s a simple formula but one other awards shows could stand to remember: put together two funny performers who demonstrably like each other, and we’ll like spending the time with them.

Beyond that, the Globes mostly made more of doing less: no dragged-out numbers or between-awards bloat, just a brisk program of awards that left a little time for moments like Emma Thompson swaggering onstage holding her shoes and a martini. The production was often sloppy: starting with early winner Jacqueline Bisset, there were epochal waits for winners to make it through the ballroom, an inconsistent finger on the bleep button, and awkward battles with the play-off orchestra.

More substantively awkward was Woody Allen‘s winning the Cecil B. DeMille Award, Annie Hall star Diane Keaton accepting for him with attention to the roles he’s created for women—not long after a Vanity Fair investigation alleging that he sexually abused Mia Farrow‘s adopted daughter when she was seven years old. (Both Farrow and her son Ronan tweeted their objections during the show.) And the night began with hitches outside the main broadcast, including E!’s preshow, with an on-screen graphic that called Michael J. Fox’s Parkinson’s Disease a “Fun Fact.”

The TV awards, meanwhile, were the usual mixed Globes swag bag. Breaking Bad‘s wins, for drama and for Bryan Cranston, were well-deserved and unsurprising. On the other hand, the dominance of the perfectly good but hardly great Brooklyn Nine-Nine was a head-scratcher–not just as best comedy but for Andy Samberg, whose amiable performance gets (and needs) a lot of support from a great ensemble. But Brooklyn is a good and improving show that needs help in the ratings, and if the win helps it get renewed–already this morning Fox was indicating it would—then there are worse ways to give a random award. I’m happy for Elisabeth Moss, disappointed for Tatiana Maslany, puzzled by Jon Voight: but again, this is the Globes. It’s an honor just to get access to the open bar.

But the best Globes verdict was already known: that Fey and Poehler will be back for 2015. Last night, Fey was already making fun of their own success: “This is Hollywood, and if something kinda works, they’ll just keep doing it until everybody hates it!” I’m willing to take that chance. 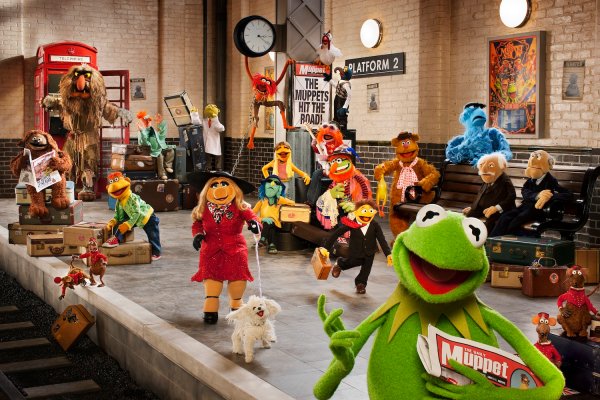 WATCH: Muppets Most Wanted Golden Globes Ad May Have Been Even Funnier Than the Golden Globes
Next Up: Editor's Pick