The 'Most Haunted Island' on Earth Is Now Up for Auction

VENICE, ITALY - AUGUST 27: Beds and furniture remain in one of the dormitories in the psychiatric ward of the abandoned Hospital of Poveglia on August 27, 2011 in Venice, Italy. The island of Poveglia, with its ruined hospital and plague burial grounds, is said to be the most haunted location in the world. The area is located within a multi-million dollar piece of real estate but is deserted and off limits to the public. The dark and derelict forbidding shores are only minutes away from the glamour of the Venice Film Festival on the Lido. (Photo by Marco Secchi/Getty Images)
Marco Secchi—Getty Images
By Laura Stampler

For those who watched American Horror Story and thought, “Gee, it looks like Connie Britton is having a fantastic time, how can I recreate this living experience?”—you’re in luck. To pay off its public debt and appease the European Union’s budgeting guidelines, Italy is auctioning an island off of Venice that just happens to be considered one of the most haunted places on earth! Or as HuffPost puts it, “Like Hell, but in Italy.” Getting driven into madness by ghosts is so much more fun when you get to eat pasta while doing it!

Why should you be afraid of the deserted Venetian island of Poveglia?

For starters, it is deserted. Even though it’s beautiful and incredibly close to Venice, one of the most fannypack and Segway-tour-filled cities in the world. Literally 10 minutes from Saint Marco Square.

Poveglia’s sordid history serves asa good explanation for why no one wants to go there. The 17-acre island became a dumping ground for Europeans dying of the plague. And as the rumors have it, the ghosts of the plagued still haunt the island. Things took a turn for the lighter in 1922 when a hospital for the elderly—thought to be a cover for mental institution—was opened. Cue widely spread rumors of botched lobotomies and a doctor who threw himself to his death from a hospital tower. No doubt a side-effect of getting haunted by the patients he was maiming.

Other fun facts: there’s a local saying that goes “When an evil man dies, he wakes up in Poveglia,” there are rumors that the soil is made 50% out of human ash, and talk that an American TV host was possessed during a recent visit to the island.

Apart from that, though, we’re sure it will make a great spot for a destination getaway. 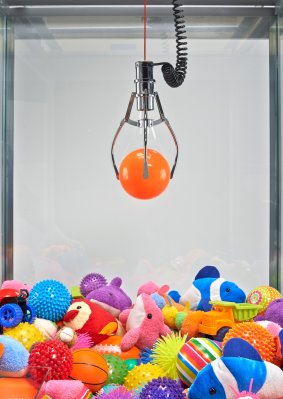 Missing Toddler Found Playing With Stuffed Animals Inside the Claw Machine at a Bowling Alley
Next Up: Editor's Pick