I’ve said most of what I needed to about now ex-mobile game Flappy Bird, because saying much more starts to look like a dissertation on the skeletomuscular parameters of Miley Cyrus’ stage maneuvers. I mostly hope the game’s creator, Nguyen Ha Dong, is able to find some kind of respite from the spotlight, which reportedly drove him to yank the game off Apple’s and Google’s mobile stores this weekend.

But I want to add a few more things before we bid Nguyen’s little bolt from the blue farewell (until the invasion of me-too clones arrives). Not about how much the game supposedly made per day in ad revenue, or whether Nguyen used bots to grease Flappy Bird‘s uncanny luge ride to the iTunes Store’s app throne, or whether someone else (Apple, Nintendo) applied pressure of whatever sort to hasten the game’s demise, or what ultimately prompted Nguyen to mysteriously yank the game, most of which detour into feckless speculation.

I want to write instead a little more about the game itself, because I’ve read some amusingly wrongheaded defenses of its mechanics — defenses telegraphing their allegiance to nostalgia, if nothing else.

But I should probably review how the game works before we go any further, since some of you haven’t played it, and may never at this point, short of buying it off eBay for crazy-bucks (or, if you’re an Android user, downloading the APK file from an APK host site).

In brief, Flappy Bird is about finessing a bird’s flightpath, left to right, while avoiding no-frills obstacles: basically the cartoonish green pipes from Super Mario Bros. on infinite recycle. The bird flaps its wings each time you tap the screen and otherwise nosedives like a rocket-propelled bomb. Touch the pipes, which extend from the top and bottom of the screen, creating a tiny space for passage, and you fail. Touch the ground and you fail. The pipes change height (and therein lies most of the difficulty), but the distance between them never varies. That distance is relatively small, while the distance the bird travels with each flap — as well as the speed at which it plummets — is considerable, making repeat navigation between the pipes ridiculously hard.

Those are the rules. Like an endless runner, the game has no end. There are no levels, no extra lives, no continues and no finish lines. You tap to start, then remain aloft for as long as you can. The closest thing to performance metrics is a pipes-cleared counter that feeds a public scoreboard, as well as gold, silver or bronze medals for clearing 10, 20 or 30 pipes (the medals reset each time you restart the game). I came close to snatching silver (20 pipes) early last week before throwing in the towel, at which point I removed the game from my iPhone. When Nguyen informed the world that he planned to retract his little wunder-game on Sunday, nothing impelled me to pull it down for posterity.

So why was Flappy Bird such a crummy game, as quick-play games go?

Imagine an endless runner whose first leap took a dozen tries (and exponentially more to make the next dozen). Imagine a platformer with nearly-impossible-to-land-on platforms. Imagine Pac-Man with twice as many ghosts, or levels a fraction as big. Imagine Angry Birds if the only way to pass a level was to get all the stars and on the first try.

I realize Flappy Bird isn’t about seeing the sights or amassing content that feeds other systems. However, an essential part of better than merely compulsive game design — as a guy like Shigeru Miyamoto proved time and again with games like Super Mario Bros. and Donkey Kong — is striking the right balance between failure and success (including how those states fall along a play session’s timeline). Flappy Bird fails that test, in my view, by eschewing progressive play mechanics — call it an acclimation period to acquaint you with the game’s physics — for mere difficulty, which is both immediate and crushing.

Any game can be sadistically difficult. Just put dozens of Hammer Bros. at the start of Super Mario Bros. or make every jump all but un-make-able from the outset. Better games teach you their limits (as well as yours, skill-wise) gradually.

Flappy Bird can’t be bothered with any of that: It’s as one-note about its one-noteness as this tune goes. There’s a certain flavor of old-school to that sort of punitive minimalism, sure, but in saying so, we gloss over the fact that the old-school games we’re probably thinking about often worked as such out of technical necessity, not because gaming’s grandparents were somehow wiser about video game design. If I revisit those games, it’s for nostalgic reasons, not to celebrate their brilliant mechanical brutality. Sadism in games has its place, you’ll brook no argument from me, but I need more than mere sadism to ring my compulsion bell (more than a few times, anyway).

Some of you will disagree, and that’s fine, because in the end, we’re just arguing for what we want to see more — or less — of. And when a game like Flappy Bird emerges to dominate the conversation unexpectedly, it gives us a chance to. 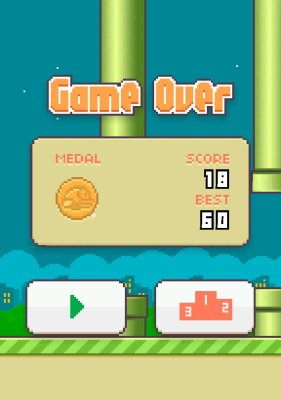 Goodbye, Flappy Bird -- You Lived Fast and Died Young
Next Up: Editor's Pick