A New Muslim Renaissance is Here

History is witness to a time past when the Islamic civilization produced globally unparallelled architecture, literature, science, philosophy, theological discourse, and cultural influences – influences so strong it made European nobles want to dress like Muslims. Critics of Islam and Muslims scoff at this romanticism, asserting that Muslims have not produced anything great since the Middle Ages and most likely will never again. The inherent bigotry and even fallacy of that argument aside, for those critics I have to say, look out, a new Muslim renaissance is upon us.

In the midst of growing anti-Muslim sentiment in the US since 9/11, or perhaps thanks to it, this generation of Muslims is abandoning the traditional professions expected from immigrant parents (doctors, engineers, business people) and entering fields we all once thought were closed to us. The last decade has seen a steady and sure emergence of American Muslims as artists, writers, performers, activists, media personalities and intellectuals (on a global scale Muslims rank as top intellectuals). Inside the DC beltway you see evidence of this shift as well. Young American Muslims are working in national security, public diplomacy, foreign policy, politics – we have our share of hacks and wonks now too.

In a climate where America still finds itself in an uncomfortable dance with Islam, the fact that Muslims themselves are becoming thought and culture leaders in America has tremendous prospects. Anti-shariah bills loom large across the country, violence against Muslims happens and is encouraged, the homeland security apparatus is still figuring out how to work with Muslims as partners and not suspects, and a large swath of the public cannot even stomach something as innocuous as Muslims being in a patriotic coca-cola ad. But instead of being cowed, young American Muslims have reacted by demanding to tell their own stories, become influencers, and claiming their rightful place in US institutions and discourse.

This dynamism hasn’t been limited to the intersection of American Muslims with the prevailing culture. In the past five years American Muslims are leading movements to revive or reform perspectives on religious inclusion, most notably the inclusion of women and LGBTQ Muslims in sacred spaces.

On the issue of women’s leadership, inclusion, and status in Islam, there is a clear call to revive the traditions of female scholarship, leadership, and open mosque spaces. It’s no small thing that the Grand Mufti of Egypt Shaykh Ali Gomaa has acknowledged the permissibility of women leading men in prayer in the Western context after the persistence of female North American Muslim activists and scholars on the issue. A movement to explore the spaces allotted women in American mosques has lead to a larger discussion on what it means to be “Unmosqued”, or be part of a generation that feels little relevance and connection to any place of worship. “Muslim feminism” is being taken seriously by Western Muslims as the antidote to patriarchal expressions of Islam. The long standing idea, from the colonial period onward, that mosques and religious leadership are male spaces is finding its match not in a global Muslim arena, but in a Western Muslim one.

Similar to other faith traditions in the US, Islamic orthodoxy and traditionalism is being challenged on the issue of LGBTQ inclusion. A progressive Muslim movement is forcing Muslim debate and discussion on the limits of tolerance and inclusion. While the prevailing rulings of the theological boundaries on homosexual lifestyles are unlikely to change anytime soon, Western Muslim institutions have been moved to adopt a position similar to Orthodox Jewish leaders. A public recognition by a major Muslim organization of universal human dignity, and the right not to be discriminated against based on sexual orientation, would be nearly impossible to find in Muslim majority countries today, and just as difficult to find in the US a decade ago.

Social challenges such as finding suitable marriage partners is pushing conversation on interfaith marriage, traditionally an option for Muslim men, but now seriously being discussed among American Muslim women. Not just discussed, but supported by some religious leadership.

An interesting trend on these issues is that American Muslims by and large seek religious validation for revisiting and reforming rulings. They even depend on traditional Islamic principles such as ijtihad to, some may say, do away with other traditional Islamic principles. As such, a modern Islamic orthodoxy with Western Muslim scholarship at the helm, grounded in faith but embracing pluralism and change, seems to be the balance most American Muslims are gravitating towards

It’s heady, scary, and exciting to watch the face and discourse of American Muslims change and expand before your eyes. The Islam I grew up with in America is not the Islam my children are experiencing. The possibilities for their lives are much more expansive than the possibilities for my life were. The largely comfortable integration and success of American Muslims that sets them apart from their counterparts in Europe also lends space for these possibilities. From tremendously increased participation in American civic and cultural life, to pressing internal demands on religious orthodoxy, another generation or two will see a vastly different American Islam that will likely have an impact on Muslims globally. From marginalized minority, American Muslims are poised to become mainstream leaders and influencers. And it’s no small irony that while historians bemoan conquest and Western colonialism as the death knell for Islam’s “Golden Age”, this new Muslim renaissance is growing out of the West itself.

Rabia Chaudry is an attorney and the founder and president of the Safe Nation Collaborative. 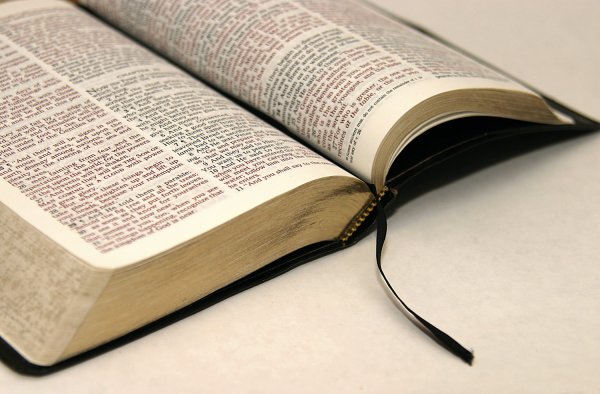 La. Bill Would Make the Bible Official State Book
Next Up: Editor's Pick