REVIEW: Transcendence Has Only Artificial Intelligence

Your late, loving husband Will Castor (Johnny Depp), now a disembodied computer brain, has wired himself into another man’s body, taken over his mind and voice and reaches out, saying, “I can touch you now.” If you’re his/its wife Evelyn (Rebecca Hall), you might be touched — at least literally. Anyone else among the characters or the audience of Transcendence is likely to be pretty seriously creeped out.

A love story between a human and a computer: we got one for Christmas, and it was called Her. Joaquin Phoenix fell hard for the voice of Scarlett Johansson — who wouldn’t? But in Transcendence, the provocative but ponderous science-fiction thriller written by Jack Paglem and directed by Wally Pfister, the dating game is an endgame. Will, a leading light in the study of artificial intelligence, and Evelyn, his devoted research assistant, are bound in love and work. To keep her love alive, she will enable his existence as a sentient being whose implications she may not have quite thought through.

Smart machines that may serve or dominate mankind are as old as Samuel Butler’s 1872 novel Erewhon and Karel Capek’s 1920 play R.U.R. and as recent as this week’s episode of The Simpsons, in which Dr. Frink revives the dead Homer as a chatty screen saver. Next year, Marvel’s Avengers will reunite to battle a brilliant computer (and Oedipal wreck) in Age of Ultron. AI parables usually assume a Doomsday tone, preaching fear of the devices that keep the modern world running — including the computers whose magic makes today’s action-movie effects so very effective. A movie like Transcendence may be pertinent in its political reverberations of all computer data held in a cloud and monitored by the NSA, but it also rails against the tools its makers so artfully employ. Just don’t tell the techies who masterminded the cool CGI stuff.

In the not too distant future, the world is without the Internet. Streetlights don’t work; a cell phone is discarded; a computer keyboard is used for a doorstop. Flash back to five years earlier, when Will and his friend and colleague Max Waters (Paul Bettany) speak at a Silicon Valley conference. Max hopes to cure cancer and Alzheimer’s, but Will wants to create an AI greater than the combined brainpower of all humans who have ever lived on Earth. He has devised a Physically Independent Neural Network (PINN) that could build on the work of another scientist, who has managed to upload the brain of a rhesus monkey. Will PINN be the next step in technological and possibly human evolution?

That notion is toxic to blond Bree (Kate Mara) and her cohorts in a radical, back-to-basics group called RIFT (Revolutionary Independence From Technology). They’re sort of the 21st century Amish, except that in a 9/11-ish neo-Luddite attack, they kill computer programmers with exploding slices of birthday cake. One of the RIFTers shoots Will with a bullet that gives him radiation poisoning. Weeks away from certain death, he determines to upload his intelligence, his very soul and essence, into a computer. When he dies, a half hour into the movie, Evelyn and Max unplug PINN and — in a lovely little frisson — the last thing we see among the tumult of digits on the computer screen is the blink of a message: “ANYONE THERE?”

With some misgivings but much love, Evelyn keeps the system functioning and growing. Under cyber-Will’s instructions, she buys up a desolate, depressed town called Brightwood and builds an enormous facility, whose screens show Will’s omniscient visage and whose machines can perform miracle surgery, like giving sight to a man blind from birth. Crystalline particles rise from the ground and catch the wind (as in the 1956 sci-fi essential Invasion of the Body Snatchers) to spread the new gospel across the earth. Is this a Good Word or a triumph of Will?

(FIND: Invasion of the Body Snatchers among TIME’s Top 10 Sci-Fi Movies of the 1950s)

Like God’s Not Dead, the fundamentalist Christian movie that has become a popular hit, Transcendence is essentially a dramatized debate. And as God’s Not Dead stacks the rhetorical cards for the Deity’s existence, the Pfister film eventually hangs back with the Luddites. The man who will soon shoot Will asks him if, by advancing artificial intelligence, he’s not creating a God, and Will wryly replies, “Isn’t that what man has always done?” That’s just what Will, the ghost in the computer, has in mind. When a posse led by old friend Joseph Tagger (Morgan Freeman, who has also played God a few times) and FBI agent Buchanan (Cillian Murphy) confronts Will in Brightwood, he tells Evelyn, “We’re not going to fight them. We’re going to transcend them.” He means subdue and inhabit them, engulf and devour.

The two lead actors have occupied similar roles before. Depp has played many an antic genius, and he slipped inside the body of an Old West chameleon in Rango. In Iron Man 3, Hall was the biologist who helps deranged scientist Guy Pearce create Extremis, a computer program that can “hack into the hard drive of any living organism” and overtake its DNA. In Transcendence, she represents the core emotion: of a woman who wants to hold on to her man even as his wits may be festering in a case of Alzheimer’s with a capacity for mischief on a global scale. That’s poignant, but Hall gets to express these feelings only with a mopey, mouth-agape unease. And Depp, who has gone studiously, sometimes entertainingly, bananas in the Pirates movies and his Tim Burton collaborations, is subdued to the point of entropy. If he can’t overplay, he doesn’t play at all.

Pfister served as Christopher Nolan’s cinematographer on five films, including The Dark Knight and Inception. Borrowing many of Nolan’s favorite actors, Pfister also co-opts some of Nolan’s weighty themes — of technology’s gifts and curses and questing intellect run rampant. But clever ideas early on go rogue, or go missing, in the gallop toward an action-film climax that then, perversely, doesn’t materialize. The movie’s intelligence is artificial, its affect solemn.

(READ: The meta-musings of Inception)

It’s been said there’s one way to tell if a computer is human: ask it to crack a joke, and see if it can understand irony. This computer movie does neither. Bursting with unrealized potential, Transcendence ends up as a trance dance. 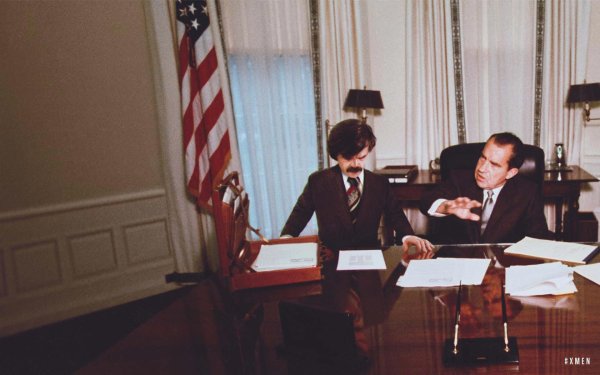 If You're a Nerd, This Is the Best Web Site on the Internet Right Now
Next Up: Editor's Pick