A labourer works at a construction site in Hangzhou, Zhejiang province, April 14, 2014. China's economy grew at its slowest pace in 18 months in the first quarter of 2014, official data showed on Wednesday.
William Hong—Reuters
By Michael Schuman

As usual, China manages to surprise. Many economists have been expecting China’s economy to suffer its roughest patch in more than 20 years. But on Wednesday, the government announced GDP grew a healthy 7.4% in the first quarter. That’s slower than the previous quarter, but still better than consensus forecasts. Though some of the underlying details won’t inspire optimism — the all-important housing sector is stumbling, resulting in slower investment — generally the data lifted spirits around an Asia increasingly dependent on China for its growth.

Yet don’t breathe too easily. As has been the case for several years, robust GDP growth figures mask what is really rotting the Chinese economy and threatening global economic stability: Extreme levels of debt. The rapid rise of debt (relative to GDP) in China has been similar to that experienced in other countries (including the U.S. and Japan) before their financial crises, and today the economy is in the process of a major workout of the problem. Growth has slowed because credit expansion has, too. The government also seems to be getting a handle on the out-of-control “shadow banking” sector. But the signs of strain are obvious, including the country’s first-ever corporate bond default in March. That’s probably just the beginning. China has become a debt junkie, requiring more credit to generate its growth, and that’s a problem that can’t be resolved overnight.

It will also take some pretty serious reform. Fixing the debt problem and returning to more sustainable growth will entail a fundamental transformation of the way in which the economy works. The state maintains tremendous control over finance and many key industries. But that has to change. Bureaucrats have to permit banks to allocate money more wisely, withdraw the subsidies and protection from bloated and uncompetitive state-owned enterprises, and allow excess capacity to get weeded out. Beijing’s top policymakers have pledged reforms that would give the market more power and the private sector more influence. But the measures have so far remained the subject of nice speeches, not actual policy. And as this big transition is taking place, China’s leaders will encounter many risks – probably more bankruptcies, bank losses and hard choices about which firms to rescue and which ones to let go.

That’s why Societe Generale, in a note on Wednesday, said China was in the midst of “a good slowdown” — a much needed pause to sort out the problems amassed over the decades of rapid growth. It’s a daunting challenge, one that ultimately surprising growth figures can’t hide. 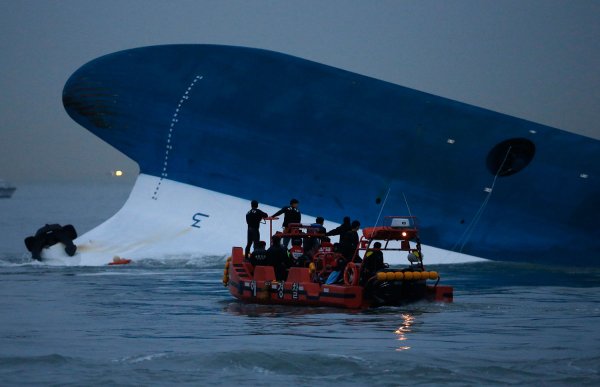 PHOTOS: Daring Rescue as Ferry Sinks off South Korea
Next Up: Editor's Pick