The Palestinian official who headed Yasser Arafat’s security force at the start of the Second Intifada is warning that armed conflict may well follow the failure of current peace talks with Israel.

“They should expect a reaction,” Jibril Rajoub tells TIME in an interview. “We have to ring the bell. Uncle Sam should understand that there is a new fascistic doctrine among the Israelis, and this is a real threat to their interests in the Middle East, and even in the whole world.”

Rajoub, who now holds the title of minister of youth and sport in the Palestinian Authority, stops short of declaring the West Bank will erupt if U.S. Secretary of State John Kerry fails to coax a final agreement from the talks, set to end in April. But the vehemence of Rajoub’s message is clearly meant to draw attention, as was the place he first delivered it–a television studio in Tehran.

Rajoub’s Jan. 28 visit to Iran was extraordinary for a senior official of Fatah, the secular movement that dominates the Palestinian Authority led by Mahmoud Abbas. Iran has been the major sponsor of Hamas, the militant Islamist group that drove Fatah out of the Gaza Strip in 2007. Rajoub says Abbas sent him to Tehran in order to encourage Iran’s new President Hassan Rouhani in his effort toward a more moderate foreign policy (including outreach to Gulf countries that are close to Fatah) and to enlist Iran’s efforts in Fatah’s long-promised reconciliation with Hamas.

But Tehran also provided an effective stage for broaching the option of violent struggle — something Fatah has avoided for at least a decade. Abbas continues to forswear violence, instructing PA forces to work with Israeli security to thwart any attacks. Should the peace talks break down, the confrontation he calls for would be limited to the diplomatic arena, including the option of charging Israel before the International Criminal Court.

But violent incidents have risen on the West Bank over the last year, and a recent poll found a plurality of Palestinians believe armed resistance more likely than negotiations to deliver the statehood that has not emerged from two decades of talks.

“Now we are engaged in negotiations. We hope this will lead us to our national goals,” Rajoub says. “But if talks fail or collapse, the Israelis will not keep behaving as the bully of the neighborhood while enjoying security and stability, expanding settlements and humiliating Palestinians. Resistance will be an option, including armed resistance, within the [Occupied] Territories against the occupation.” He rules out the possibility of attacks in Israel, pointedly telling his Iranian interviewer “there must not be bus bombings in Tel Aviv.”

The warning is only that — Rajoub says a decision to return to arms would be a collective one — but Rajoub is a fitting choice for delivering it. Jailed for 17 years by Israel, he was a militant in his youth, running Fatah cells in the Hebron Hills. As head of Preventive Security under Arafat, he ran the largest intelligence and enforcement apparatus across the West Bank. After the 1993 Oslo Accords promised Palestine a state, he also worked closely with Israeli security, in order to thwart violence aimed at derailing the pact. Interviews with former chiefs of Israel’s domestic security agency make up the entirety of the Oscar-nominated documentary The Gatekeepers, and when their talk turns to discovering that some Palestinians turn out to believe ardently in peace, the image on the screen is Rajoub’s. He lowers his gaze at the reminder.

“Who, you think, changed?” Rajoub asks. He says the good faith shown to Palestinians by Prime Minister Yitzhak Rabin is gone with Rabin, assassinated in by a militant Jewish settler in 1995. Hard-core supporters of settlements, which currently number 200 and keep Palestinians off more than 40 percent of the West Bank, now dominate the right-wing Likud party of Prime Minister Benjamin Netanyahu, who has announced regular expansions of settlements during the current round of talks—an act considered illegal by most of the international community. Meanwhile, extremist settlers routinely harass Palestinians on the ground, uprooting olive trees and vandalizing mosques.

“Enough, enough, enough,” Rajoub says. “Dogs enjoy rights in Europe and America better than the Palestinian in their homeland.

“I am still committed, but my people are losing hope.” 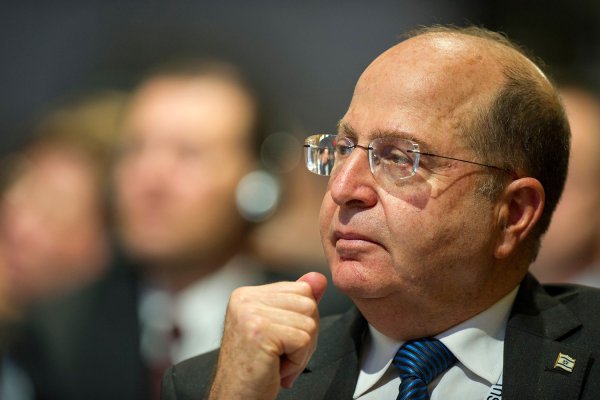