Hate Crimes May Be Down, But Anti-Semitism Is Still Malignant

The killings of three people near Jewish Community Centers in Kansas City on April 13 were senseless, but investigators have gathered the alleged shooter’s intention was clear. The Southern Poverty Law Center said that suspect Frazier Glenn Miller, who went by the alias Frazier Glenn Cross when he was arrested, was a former grand dragon in the Ku Klux Klan and “raging anti-Semite” who spent the past several decades advocating for the extermination of Jews.

Miller spewed hate in over 12,000 posts on the anti-Semitic, white supremacist website the Vanguard News Network, using slurs to refer to Jews and blacks and calling the U.S. federal government the JOG, or the Jewish Occupied Government.

Thankfully, America is not teeming with Frazier Glenn Millers. Hate crime overall is declining in the U.S., according to the Federal Bureau of Investigations. In 2012, law enforcement agencies reported 5,796 total hate crime incidents, accounting for 6,718 offenses, down from 6,222 incidents of hate crime and 7,354 offenses in 2011.

But despite that downturn, anti-Semitic sentiments still make up the bulk of religious-bias crimes in the U.S. Nearly 60% of the 1,166 anti-religious hate crimes reported to the FBI in 2012 were anti-Jewish. Mark Potok, a senior fellow at the Southern Poverty Law Center and editor of their journal the Intelligence Report, says Miller’s April 13 shooting spree is a reminder of a minor but notable undercurrent of anti-Semitism in American society.

“Overall the level of anti-Semitism in society in dropping, but there is a significant and scary underworld of people out there who really hate Jews; who see them as the evil behind all other evils,” Potok says. “It is not usually shown to most Americans, but it is steaming right along.”

The SPLC says the election of the nation’s first African American president in 2008 propelled the emergence of hate groups and pro-Patriot groups concerned about the loss of a white majority in America. The center estimates there are 939 neo-Nazi, white nationalist, and black separatist hate groups operating across the country. Though these groups are often associated with anti-black racism, Jack Levin, a professor of criminology at Northeastern University and an expert on hate crimes, says anti-Semitic sentiment is much more prevalent among white supremacists.

“Assault against black Americans, people of color, seems to be more physical and personal,” Levin says, “But if you listen to the ideology of white supremacy you’ll see that Jews are despised much more than blacks are.” Levin says white supremacists see Jewish Americans not only exerting control over the government and the media, but also being aligned with the devil. That sentiment was made clear upon review of some of the messageboard threads on Vanguard News Network, of which Cross was an active participant.

But while anti-Semitic sentiment remains virulent, the Anti-Defamation League, which keeps track of attacks on Jews, says anti-Semitic attacks are down. A 2013 report by the ADL showed there was a slight increase in the number of violent anti-Semitic crimes reported to its call centers in 2013. But, Levin says, acts of violence against Jews are rare. Far more violent attacks are carried out against people based on race and sexual orientation, according to the FBI. Hate crimes against Jews more often involve the desecration of property. According to the ADL report, there were 315 acts of vandalism reported to their call centers in 2013, compared to 31 acts of violence.

The reason? Levin says it’s as simple as hate-mongers having a hard time identifying people based on their religion when they’re not in church. Sadly, the evidence of that was all too clear after Sunday’s shooting. Not one of the three people killed—neither Teresa Lamanno nor Reat Underwood, nor William Corporon—was Jewish. 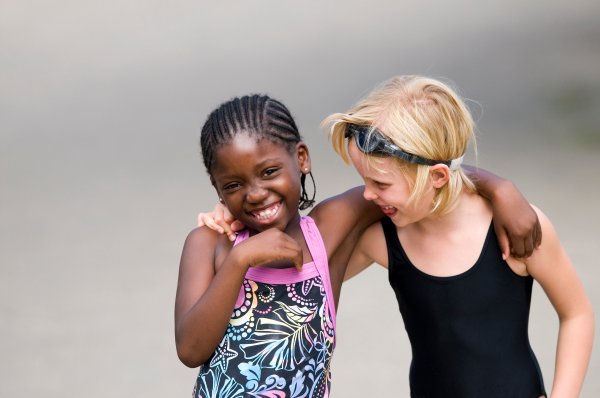 A 5-Year-Old's Black-and-White View of Race
Next Up: Editor's Pick