Yesterday, I wrote two pieces about the impossibility of making tech predictions–one involving a 1981 magazine cover, and one concerning current predictions about the wearable-gadget market in 2018. I promise to move on to other subjects in a moment, but I stumbled across one more random artifact that’s too good not to share.

Marty Cooper is the legendary inventor of the mobile phone, which he came up with in 1973 while working at Motorola. Over at the website of his company, Dyna, there’s a digitized version of an amazing article about the wireless phone market by H.P. Burstyn, from the November 1980 issue of Electronic Business magazine.

At that point, the wireless phone industry barely existed. The story reports that it may be shaping up as a war between AT&T and Motorola; says that what we later came to refer to as “car phones” would make up the bulk of the market, but that pocket-sized phones could be a big deal someday if they could be made to work indoors; and addresses concerns such as whether thieves would be likely to break into automobiles to steal phones, as they’d done a few years earlier with CB radios. Reading it today, it’s both an endearing period piece and a pretty smart summary of where the market was at the time.

It also features some stats forecasting the number of wireless phones to be sold in 10 major U.S. markets:

The projections I find fascinating are the ones in the middle column. They’re from Motorola, and they involve the year 2000, which was then two decades in the future.

It’s not entirely clear whether the total figure of 207,399 phones represents cumulative sales or sales in the year 2000 or the number of subscribers. But no matter how you slice the data, it’s wildly off. I don’t have numbers for the 10 markets mentioned, but according to the FCC, when the year 2000 rolled around, there were 109 million wireless phone users in the entire country. That’s 400 times Motorola’s estimate for the markets in its study.

In 1980, the folks at Motorola knew more about wireless phones than anyone else in the world. But they couldn’t see what economies of scale would do to pricing for handsets and service. They weren’t aware that the breakup of AT&T, mandated by the U.S. federal government in 1982, would lead to dramatically increased competition in the communications market. They likely didn’t envision that by 2000, it would be clear that phones and PCs were on their way to merging into one category of device.

Today, as far as I know, no research firm is attempting to estimate sales figures for the year 2034. Bu things move a lot faster than they did 34 years ago, so looking out even a few years is an exercise fraught with peril. And the best way to look smart isn’t to act like we’re capable of predicting the future with any precision–it’s to cheerfully admit that we often don’t have a clue. 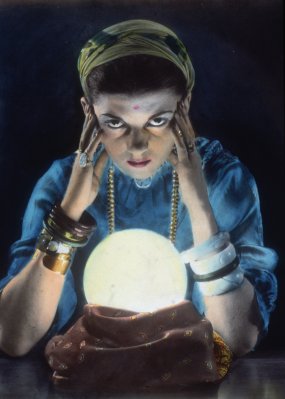 Reminder: Nobody Has a Clue How Many Wearable Devices Will Sell in 2018
Next Up: Editor's Pick