After journalist Jill Smolowe buried her husband, sister, mother and mother-in-law within the space of 17 months, she expected to fall apart. To her surprise — and relief — her grief bore no resemblance to the portrait of paralyzing despair depicted in American films, TV shows and memoirs. Here, she shares the coping strategies that helped her keep going:

1. Remain connected to your life. When a loved one passes away (or receives a dire diagnosis), your life undergoes a seismic shift. As your Old Normal totters, well-meaning friends and relatives reinforce your feeling of disconnect from your old life by assuming that the only topic you want to talk about is your worry and sorrow. Perhaps that’s true. But if you, as I did, find the concerned “How are you’s” more exhausting than comforting, direct the conversation toward more familiar terrain. “How do you read Putin’s moves in Ukraine?” “What is ‘conscious uncoupling,’ exactly?” Your heart may not be in it, but as the focus moves away from your distress, you may find your thoughts do, too. Even a few minutes respite can be replenishing.

2. Do not assume your sorrow will overwhelm you. Bereavement research of the last 20 years shows that a clear majority of mourners are quite resilient. They experience their grief as a constant oscillation between sadness and lighter moments. This helps them not only to endure their sadness, but also to experience pleasure even during the earliest days of loss. As for the five-stage cycle of grief so popular in our cultural script, it is a myth. Dismissed by bereavement researchers long ago, the cycle’s five stages (denial, anger, bargaining, depression, acceptance) were based on Elisabeth Kübler-Ross’s observations of the dying — not the people left behind.

3. Tune into what you actually feel and need. When I lost Joe, my beloved husband of 24 years, I assumed that collapse would follow. The way I envisioned it, one day soon I would get into bed, pull the sheet over my head and not get up. To my surprise — and relief — that day never arrived. Instead, I continued to function much as I normally do, albeit with emotions more intense than usual. Within two weeks of Joe’s death, it became clear to me that sitting home only added to the weight of his absence. So, I went back to work. I resumed walks with friends. I attended my daughter’s crew regattas. Though my sorrow accompanied me everywhere, the effort helped me to get out of my head and reconnect with the parts of my life that remained intact.

4. If you don’t want to, don’t. This piece of advice, offered by three widowed acquaintances on separate occasions, proved a keeper. Early on, I let it guide my responses to social invitations. I also let it inform my responses to inquiries, both sincere and casual, about how I was doing. If I didn’t feel like talking about my grief, I didn’t. As weeks, then months went by, I came to understand that, for me, grief was an intensely private experience. If I was going to cry (as I did daily for many months), I preferred to do it when I was alone. My feelings of loss were too personal and too impossible to explain. Talking about them did not help.

5. People are not mind readers; tell them what you need. Friends want to be supportive, but they will lean on their own (often untested) preconceptions about grief if you don’t speak up. For me, the commiserating hugs, worried looks and somber conversations got old, fast. I let friends know that what I needed most was for them to talk to me about their lives, their kids, their work. That response felt awkward, even ungracious, at times. But later several friends told me that by giving them clear guidance, I made it “easy” for them to help me. (Note to friends: helping a grieving person to focus on her strengths, rather than her sorrow, can be very therapeutic.)

6. For those who aim to lend support, watch for cues, listen carefully. Heartfelt though it may be, an offer of “If there is anything I can do …” is tantamount to offering nothing. (Trust me. A bereft person doesn’t want be saddled with the task of making you feel useful.) Instead, be attentive. If your concerned “Tell me how you are” meets with a brisk “Fine, how was your vacation?” that’s a signal to change the channel. If you notice a grieving neighbor’s trashcans are still curbside two days after the garbage pickup, ask if she wants them returned to her porch — or better yet, just do it. If your phone messages aren’t being returned, try email. Mourners appreciate your concern, but they may not be ready to deal with it on your schedule.

7. Express your love and appreciation. If there was any silver lining in Joe’s death, it was that we had time to prepare. While we didn’t anticipate that he would die, we knew from the day of his leukemia diagnosis that death was a possible outcome. Over the next two and half years, we constantly expressed not only our love, but also our appreciation for each other and for the life we’d built together. I’d always known that Joe loved me, but his acknowledgments of things I’d done for him and sacrifices I’d made on behalf of our marriage would later prove consoling. Those conversations also provided opportunity to address our unresolved issues. After Joe died, my grief was unencumbered by either unfinished business or regret that I’d left something important unsaid.

8. Gratitude is a potent antidote. As I worked on Joe’s eulogy, it occurred to me that too often such loving sentiments are reserved for memorial services. I wanted the people whose kindness had touched or steadied me during Joe’s long illness to know what I valued most about their support. Now. Before it was too late. So, I began writing thank-you letters that detailed what exactly it was about each person’s support that had lightened my load. Each time I unbottled my gratitude, it helped me to recognize the many reasons I had to go on without Joe.

9. Know your loved one’s final wishes. During a particularly gruesome hospitalization, Joe told me, “There are some things I want you to know, in case I die.” He specified the items he wanted me to save for our daughter, and told me to discard the rest. He told me he wanted to be cremated and wanted a memorial service. And he told me, “You should remarry.” Though numbing in the moment, his stated wishes proved a gift. Weeks later when he died and I was in the blur of new grief, I didn’t have to second-guess his burial preferences. His detachment about his possessions enabled me to sift and discard as I chose. And his generous statement about marriage enabled me to move on without guilt, knowing that he wanted me to build a new life.

Jill Smolowe is the author of the new memoir Four Funerals and a Wedding: Resilience in a Time of Grief. 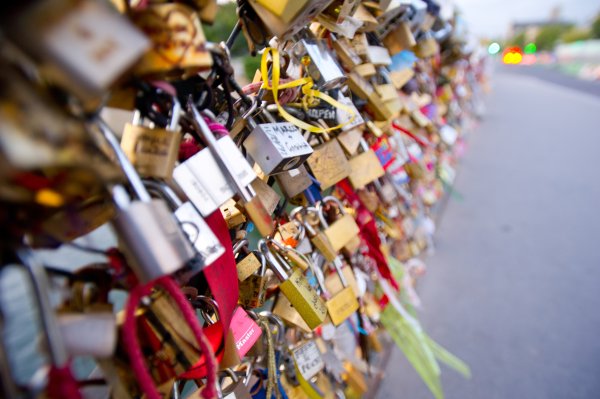 The Science Of 'Happily Ever After': 3 Things That Keep Love Alive
Next Up: Editor's Pick