Crosses bearing the names of victims of the 2013 Boston Marathon bombing are displayed in a memorial at the Boston Public Library on April 14, 2014 in Boston.
Andrew Burton—Getty Images
By Denver Nicks

One year after four people were killed and hundreds more injured in the Boston Marathon bombings, the city marked the grim anniversary Tuesday with a day of tributes amid preparations for a record number of entrants to this year’s race.

The day began with a group of dignitaries, including the family of the youngest victim, walking with an honor guard to the site of the April 15, 2013, bombings. Bagpipes played as wreaths were placed at the site of the tragedy and no public comments were made.

Around 3,000 survivors, first responders and dignitaries were in attendance at a ceremony at the Hynes convention center Tuesday marking the one year anniversary of the bombings.

“I know that no memorial, no words, no acts can fully provide the solace that your hearts and soul still yearn to acquire,” Vice President Joe Biden said in remarks during the event. “I hope it eases your grief a little bit.” Biden praised the courage of survivors and the families of the dead. “America will never, ever, ever stand down,” he said. “We are Boston. We are America. We respond, we endure, we overcome, and we own the finish line.”

After speeches by Biden, Massachusetts Gov. Deval Patrick and others, survivors walked to the finish line to observe a moment of silence, USA Today reports. Church bells throughout Boston sounded at 2:49 p.m., a year to the minute from the moment the bombs exploded.

President Obama released a statement asking for remembrance of those injured and the four innocents killed, each of whom he called by name. “We also know that the most vivid images from that day were not of smoke and chaos, but of compassion, kindness and strength,” the president said. “A man in a cowboy hat helping a wounded stranger out of harm’s way; runners embracing loved ones, and each other; an EMT carrying a spectator to safety. Today, we recognize the incredible courage and leadership of so many Bostonians in the wake of unspeakable tragedy.” Obama and a small gathering of aides will join Bostonians for a moment of silence at 2:49 p.m. in the Oval Office.

Officials expect a crowd of roughly a million people to cheer on 36,000 runners in this year’s race on Monday, April 21, a 33 percent increase from the cap on entrants in previous years. The field in this year’s Boston Marathon will be larger than any in the race’s 118-year history but one: the 1996 centennial Boston Marathon, at which more than 38,000 started the race. Security will be tight this year, with 3,500 police on duty for the race, double the size of last year’s deployment. 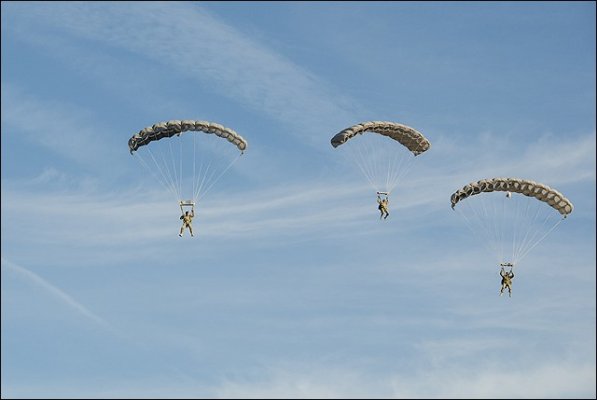 Stop! Or They'll 'Chute
Next Up: Editor's Pick