Part of the tail of the doomed KC-135.
Vladimir Pirogov / Reuters
By Mark Thompson

Putting young, inexperienced pilots into a 50-year-old Air Force plane seems like a risky idea. Even riskier? Getting rid of crew’s parachutes to save money.

But that’s what the Air Force did last May 3, when it launched a mission to refuel U.S. warplanes over Afghanistan using a KC-135 Stratotanker delivered by Boeing to the Air Force on June 26, 1964. A problem with the plane’s flight-control system cascaded toward trouble after actions by what the Air Force has concluded was its inadequately-trained crew. In short order, the double-barreled dilemmas ripped the airplane’s tail off three miles above Kyrgyzstan’s Himalayan foothills. The plane quickly entered a steep dive, dooming all three aboard.

Both pilots graduated from the Air Force Academy in 2008, shortly after the service decided it couldn’t afford to keep parachutes on KC-135s. “A lot of time, manpower and money goes into buying, maintaining and training to use parachutes,” the Air Force said in March 2008. “With the Air Force hungry for cost-saving efficiency under its Air Force for Smart Operations in the 21st Century Program, commonly known as AFSO 21, the parachutes were deemed obsolete.”

Captain Mark Tyler Voss, 27, Captain Victoria Pinckney, 27, and Technical Sergeant Herman “Tre” Mackey III, 30, were the first airmen killed in a KC-135 crash since the Air Force stripped the parachutes from the planes.

Given the violent end of their mission, the parachutes may not have made any difference, according to the official Air Force investigation into the crash. “The [accident investigation] board sort of concluded, informally, in talking among themselves, that even if there had been parachutes, there would have been no way for them in this particular case for them to be used,” Air Force Lieut. Colonel John Thomas, a spokesman for the service’s Air Mobility Command, said Monday.

Others aren’t so sure. “Deploying aircrews to a combat zone without parachutes is an unconscionable risk,” says Alan Diehl, who spent 18 years as an Air Force civilian investigating the safety of the service’s aircraft. “The airmen aboard this KC-135 would have had to don their chutes, jettison the cockpit bailout hatch, and dive overboard—all in a matter of seconds. But to take away the option just seems wrong.”

The aerial tanker arrived in Kyrgyzstan the day before the accident. Earlier flight-control problems had reportedly been fixed. Pilot Tyler, co-pilot Pinckney and, Mackey, the refueling boom operator, boarded the aircraft early that afternoon at the Pentagon’s transit hub at Manas, just outside Bishkek, the country’s capital.

They were the first crew to fly the 707-based aircraft toward Afghanistan, loaded with 175,000 pounds of aviation fuel, since its arrival at Manas. Tanker crews are the unsung heroes of the service, the so-called “global reach” that vastly extends how far Air Force aircraft can fly without landing to refuel.

Voss had slightly more than 1,000 hours flying such tankers; Pickney had fewer than 600. Mackey was the most experienced member of the crew, with 3,350 KC-135 flight hours, but as the boom operator he had nothing to do with flying the airplane.

Shortly after the flight, dubbed Shell 77, took off, a problem with the flight-control system triggered “rudder hunting,” which caused the airplane to yaw, its nose turning from left to right and back again.

Nine minutes into the flight, the plane entered a “dutch roll,” which can happen as increasing yaw generates more lift on one wing than the other. That causes the plane to roll, until increased drag pulls the wing back and the process repeats itself with the other wing. “It’s kind of waffling,” the crew reported as they climbed above 20,000 feet. “The jet’s bent.”

The pilots tried to bring the five-second-long dutch rolls under control by using the plane’s rudder and auto-pilot. But that only made matters worse.

“The cumulative effects of the malfunctioning [flight-control system], coupled with autopilot use and rudder movements during the unrecognized dutch roll, generated dutch roll forces that exceeded the mishap aircraft’s design structural limits,” the Air Force said in its investigation into the crash, released last month. “The tail section failed and separated from the aircraft, causing the mishap aircraft to pitch down sharply, enter into a high-speed dive, explode inflight and subsequently impact the ground.”

Voss’s superiors described him as a “peerless aviator” who was “highly motivated and extremely dedicated.” Pickney’s commanders said she was “a superior leader with the drive and ability to succeed at any task.”

But despite their demonstrated skills, the investigation said that instead of trying to halt the dutch roll with the rudder and auto-pilot, they should have shut down the malfunctioning flight-control system and manually used the ailerons on the main wings to regain control.

So why didn’t they?

Such training “appears to be insufficient,” the probe added. “The mishap crew was a qualified, but minimally experienced, crew” whose “inexperience led them to rely on the autopilot to make timely inputs in an unstable flight regime. Although the Inflight Manual does not explicitly prohibit autopilot use in dutch roll, the system is incapable of making the precisely timed inputs that are required to counteract dutch roll. Both times the mishap aircraft engaged the autopilot the oscillations grew worse.”

Can’t pilots practice it, carefully, while actually flying? No. “The Inflight Manual prohibits pilots from practicing dutch roll recognition and recovery in the aircraft, specifically stating `intentionally-induced dutch roll and aerobatics of any kind are strictly prohibited’” the investigation noted.

Once their plane lost its tail, was the crew’s fate sealed? “Egress was not possible,” the accident report said. “The KC-135R is not equipped with parachutes, ejection seats, or any other means of inflight egress.” The report didn’t mention that parachutes had been on the planes until 2008.

The crew “made no comment on the flight data recorder that `We need to get out of here’ or `This is going down,’” Thomas, the Air Force spokesman, said (the recorder shut down when the plane was at 21,760 feet). “The indications were that they continued to fight to regain control of the aircraft until probably they lost consciousness.”

And how did that happen? “There is some surmising that goes on,” Thomas explained. “But [the accident board] had several experts to address this point directly, and their best understanding of what probably happened—because they have to put together their best guess based on the flight data—is that when the tail broke off, the aircraft that remained pitched, and because it was in the middle of a dutch roll it probably pitched up first, because as the tail section broke off it probably gained altitude as part of the physics of it swinging back and forth, they probably experienced negative G-forces that would have probably blacked them out.”

That 2008 Air Force news article detailed the logic of getting rid of the KC-135’s parachutes:

“The [accident investigation board’s] technical experts didn’t recall that there’s ever been an attempted, successful or otherwise, egress from a tanker aircraft,” the Air Force’s Thomas said.

But the technical experts are wrong, according to former airman Joseph Heywood. He bailed out of a KC-135 over Michigan—along with three other airmen—as their plane ran out of fuel in August 1969 (the pilot landed the plane short of the runway, but safely, at the now-closed K.I. Sawyer Air Force Base). “If they were in a dutch roll, I think it’d be almost impossible for them to get out,” he said. But removing the parachutes “doesn’t make any sense—it’s just another way of saying that money is more important than people.”

Bailing out used to be a key part of the KC-135’s Cold War mission. “Our job was to fly up and plug B-52s up near Greenland,” he says. “And if they demanded it, to give them all of our fuel, and then to bail out onto the ice pack and make our way back on foot to Billy Mitchell field in Milwaukee.”

The missing parachutes don’t bother Heywood now. “It doesn’t cause me any heartburn, because I’m not one of the people flying them,” he says. But the former Air Force captain well remembers when he needed one. “The day after I bailed out I took a bottle of booze—I think it was Chivas Regal, actually—to the guy who packed mine,” he recalled. “I’d rather have a slim chance than no chance.”

The combination of an aging aircraft, poorly-trained young pilots, and the need to save money that led the Air Force to remove the parachutes, shows a force frayed by ever-tightening, and perhaps misallocated, budgets. “The various problems surfaced by this mishap—overlooked maintenance issues on older aircraft, limited crew experience and training, poor flight simulator fidelity, and no parachutes—are all driven by funding limitations,” former Air Force crash investigator Diehl says. “The Pentagon and our Congress need to stop sequestering safety.”

The Air Force recently detailed changes it is taking following the crash. KC-135 crews will be getting more training to help them deal with dutch rolls. The service is revising flight manuals, beefing up maintenance, and improving rudder controls for the 396 KC-135s still flying. The fleet is also in the middle of a $1 billion refurbishment. But restoring parachutes to the planes—slated to fly until at least 2040—isn’t on the list of improvements. 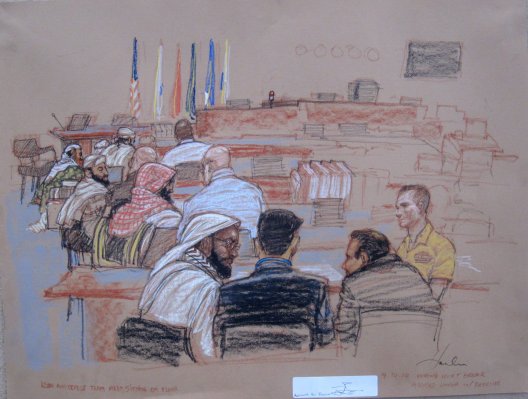 9/11 Plotters' Lawyers: FBI Tried to Recruit From Us
Next Up: Editor's Pick