Ukraine Powerless to Act as East Slips Under Russian Control

A man, who introduced himself as a lieutenant colonel of the Russian army, speaks to policemen as he introduces his appointed new head of the regional police, after the regional police building storm was stormed and its chief detained, in the eastern Ukrainian city of Gorlovka, near Donetsk, on April 14, 2014.
Alexey Kravtsov—AFP/Getty Images
By Simon Shuster

On Monday afternoon, a line of defecting officers from the Ukrainian police lined up outside their ransacked headquarters in the town of Gorlovka, in eastern Ukraine, to receive orders from their puckish new commander. Their station had been seized hours earlier by a mob of pro-Russian demonstrators, and instead of resisting many of its officers capitulated or, as they put it, “went over to the side of the people.” Greeting them outside the building with a military salute, the apparent leader of the siege, a man in fatigues who identified himself as Alexander Shulzhenko, stated his rank as lieutenant colonel. “Of what?” one of the Ukrainian policemen asked him. “Of the Russian army,” Shulzhenko said.

That brief exchange, which was captured on video and posted to YouTube within hours, was among the clearest pieces of evidence that Russian troops have already begun their takeover of the region of Donetsk, much as they did last month in Ukraine’s Crimean peninsula. But instead of sending tanks across the border, Russia seems to have chosen a more subtle form of invasion – coordinating the mobs of local men who have been seizing government buildings in a handful of cities and towns and declaring independence from Kiev.

The strategy has left the central government with no good options. It can either stand by as pro-Russian gunmen seize more and more ground in the region of Donetsk and other parts of eastern Ukraine, or it can try to evict them by force, giving Russia an excuse to launch a full-scale invasion on the pretext of protecting the locals. Either way, the loss of Donetsk to de facto Russian control already looks to be imminent.

So far, Kiev seems to be approaching this dilemma with caution. The parliament has stopped short of declaring a state of emergency, as that would force Ukraine to delay the presidential elections scheduled for May 25. And on Monday morning, the government’s deadline for launching a “counter-terrorism operation” against the pro-Russian forces ticked by without any assault. According to local media reports, the presence of Ukrainian forces in and around Donetsk has been minimal, and local police and security officials have been defecting en masse to the pro-Russian side.

All of that signals that Ukraine sees little hope of beating back the separatists by force, at least not without serious help from NATO powers. At the border, Russia has gathered a force of at least 40,000 troops poised to attack Ukraine, according to NATO estimates, and U.S. Air Force General Philipp Breedlove, the alliance’s commander in Europe, has said it would take the Russian forces between three and five days to rout the Ukrainian army if given the order to invade.

Those odds urged Kiev to appeal on Monday for immediate help from the West. Yulia Tymoshenko, the presidential candidate whose close allies hold both the interim presidency and premiership of Ukraine, declared that the “epoch of appeasing the aggressor is over.” In a written plea distributed to the press, she said, “I ask the leaders of the world to provide direct military assistance to the Ukrainian people.”

But so far, Western assistance has been limited to the delivery of 300,000 army rations from the U.S., known as meals ready to eat, while President Obama has said clearly that the U.S. will not go to war with Russia over Ukraine. Nor will any other NATO power, and without foreign help, Ukraine has become desperate enough to consider more radical means of defense. In her appeal on Monday, Tymoshenko said that, “the time has come to organize a nationwide resistance to the Russian aggressor using all available means, including a total mobilization.”

In effect, that would mean arming volunteers with little or no military training and sending them to fight a hastily arranged guerilla campaign in the east. Indeed, the day before Tymoshenko suggested this idea, Ukraine’s acting interior minister Arsen Avakov had already set a similar plan into motion. On his Facebook page, he called for all “patriots” of Ukraine to join paramilitary forces under his command, pledging that his ministry was prepared to provide guns and uniforms to as many as 12,000 of these volunteers around the country. “The creation of these special units will be carried out as quickly as possible, without any foot-dragging or formalities.”

Implicit in this strategy was an acknowledgement of just how little faith Ukraine’s leaders have in their own armed forces, both military and police. In light of this weekend’s runaway defections in the east, that hardly seems surprising. Police forces across the region of Donetsk have tended to either abandon their posts or go over to the pro-Russian forces without a shot being fired. That is what happened on Monday in Gorlovka, one of at least six cities and towns in eastern Ukraine where police buildings have been overrun.

Pacing in front of his newest batch of defectors, Shulzhenko, the Russian officer, gave them their orders. “Your aim will be to defend social order, to prevent any looting – you’re getting this, yeah? – and to prevent any buildings from being seized without approval.” By that point, no one piped up to ask whose approval he was talking about. The Russians were quite obviously in charge, and the government in Kiev had little chance of dislodging them. 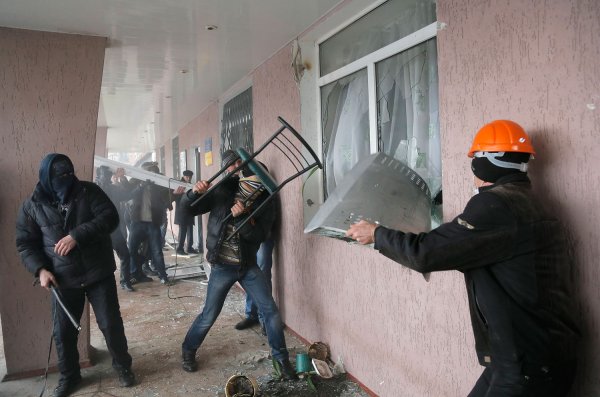 Ukraine to U.N.: Send Troops
Next Up: Editor's Pick