Activists hold signs as they attend a student loan forgiveness rally near the White House on April 27, 2022 .
Anna Moneymaker—Getty Images
By Katie Reilly

President Joe Biden campaigned on a plan to forgive at least some of the $1.6 trillion in federal student loan debt by over 44 million U.S borrowers. “Young people and other student debt holders bore the brunt of the last crisis,” he said in March 2020 as the pandemic ravaged the economy. “It shouldn’t happen again.”

More than a year into his presidency—and months away from midterm elections that threaten to eliminate the Democrats’ narrow majorities in the House and Senate—he’s facing pressure from progressive lawmakers and advocates to follow through.

But it’s clear that whatever Biden does will be short of the $50,000 across-the-board loan forgiveness championed by Sen. Elizabeth Warren and other activists—if he chooses to cancel debt at all.

What has the Biden Administration said so far?

“I am considering dealing with some debt reduction,” Biden told reporters at the White House on April 28, adding that canceling up to $50,000 in debt per borrower is not on the table.

He added: “I’m in the process of taking a hard look at whether or not there will be additional debt, and I’ll have an answer on that in the next couple of weeks.”

According to a Washington Post report late last month, the Biden Administration is still working on its policy, but is considering canceling at least $10,000 of student debt—only for borrowers who make less than $125,000 or $150,000. The White House has not publicly released details about what its student debt plan could include.

READ MORE: Erasing Student Debt Makes Economic Sense. So Why Is It So Hard to Do?

“We’re not at the point where we have a final proposal or a final executive action or anything along those lines,” White House Press Secretary Jen Psaki said during a press briefing on May 2, noting that Biden wants to make sure the plan is “targeted to those graduates who have the greatest need.”

The strongest proponents of student debt cancellation have voiced concerns that eliminating $10,000 won’t make enough of a difference for borrowers. “Canceling $50,000 in debt is where you really make a dent in inequality and the racial wealth gap. $10,000 isn’t,” New York Rep. Alexandria Ocasio-Cortez told the Washington Post.

“Bigger is better with higher levels of cancellation completely zeroing out debts for most of these borrowers, a disproportionate share of whom are Black and lack inherited household wealth,” Charlie Eaton, an assistant professor of sociology at the University of California Merced, said in a statement about the study.

During his presidential campaign, Biden voiced support for legislation that would cancel $10,000 in student debt per person, asking Congress to take action. But given that such a proposal is unlikely to win bipartisan support in Congress, advocates have asked Biden to take executive action using his authority under the Higher Education Act.

The Biden Administration has extended the pandemic-related pause on federal student loan payments through August. But advocates for debt forgiveness have ramped up the pressure to do more. The attorneys general for seven states and Puerto Rico signed a letter on May 2, asking Biden to cancel student loan debt for “each and every borrower,” saying it would be “one of the most impactful racial and economic justice initiatives in recent memory.”

While white borrowers owe just over half of the country’s student debt balance, Black borrowers have been disproportionately burdened by the loans they took out in pursuit of higher education. Exacerbated by the racial wealth gap, Black college graduates owe more, on average, than their white peers, and take longer to pay off their student loans, in part because of persistent wage disparities. Four years after graduation, Black graduates owe nearly $25,000 more, on average, than white graduates, according to a 2016 Brookings report.

“Now is not the time for half measures, extensions or patchwork solutions. Now is the time for decisive action,” they wrote.

Why some oppose student loan forgiveness

Critics of student debt forgiveness say it will help too small a percentage of the population—15% of all U.S. adults and 34% of adults under 30 have some student debt, according to Pew Research Center. And the nonprofit Committee for a Responsible Federal Budget warns that debt cancellation would worsen inflation. Critics also argue that it unfairly leaves out the poorest Americans and those who have no college education at all, while offering relief to those with more education and generally higher incomes.

Republican lawmakers have roundly criticized the proposal. And many education experts also argue that canceling student loan debt, alone, won’t be an effective solution, if it’s not combined with measures that make college more affordable in the first place.

“It shovels vast sums towards an educated, affluent, and connected constituency, while doing nothing about the causes of the ‘crisis’ it is intended to alleviate,” Frederick Hess, director of education policy studies at the conservative American Enterprise Institute, wrote after Biden’s recent comments on possible debt cancellation.

The cost of college increased by 160% from 1980 to 2019, making it harder for young people to pursue higher education and forcing many to take on more debt when they do, according to an analysis by the Georgetown University Center on Education and the Workforce.

“While there are additional investments in public higher education and policy improvements that need to be made to ensure long-term college affordability and access, direct relief is needed now,” Denise Forte, interim CEO of the Education Trust, a nonprofit advocating for educational equity, said in a statement on Tuesday. “We urge the administration to increase the level of forgiveness and act in the coming weeks.” 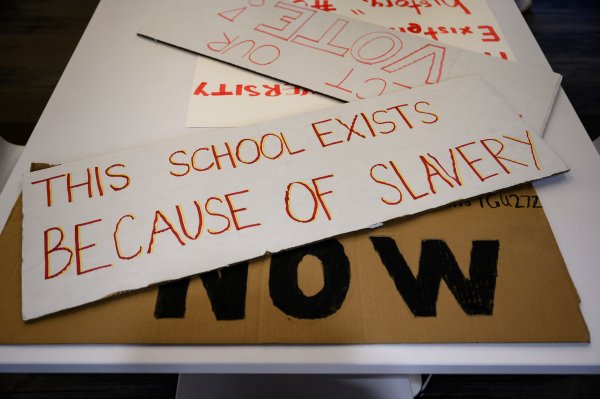 What Will Harvard's Slavery Report Actually Change?
Next Up: Editor's Pick