Giant Rodents 'Invaded' a Wealthy Gated Community. What Happened Next is a Lesson for Cities in the Climate Change Era

Capybaras are seen on the grass in Nordelta, Tigre, Buenos Aires province, on August 26, 2021.
AFP/Getty Images
By Ciara Nugent/Buenos Aires

Gated communities are known for their manicured lawns, swimming pools, and wealthy residents. In Argentina, they’re also known as the home of the world’s largest rodents.

On a drizzly afternoon in March 2022, a family of nine capybaras—the larger ones weighing in at around 130 pounds—huddle together under the hedges that surround a famous soccer player’s mansion. Munching intently on the grass, they barely look up when approached by cars or humans. These are just a few of the hundreds of capybaras that have taken over Nordelta, a private neighborhood on the outskirts of Buenos Aires, over the last two years.

The capybaras have always been present here. For the first two decades after the community’s construction in 1999, they kept themselves hidden, coming out only at night and darting from trees to lakes. But that began to change in 2020. With Nordelta’s well-heeled human residents confined to their homes by Argentina’s long and strict COVID-19 lockdown, its furrier inhabitants thrived. Spreading out across now empty parks, they reproduced rapidly, boosting their numbers by 16% in one year, according to estimates by local scientists. Then, after an unusually dry winter hit Argentina in June 2021, killing much of the grass in public areas, the capybaras got even bolder, crossing roads and venturing into private gardens.

“That’s where the conflict started,” says Marcelo Canton, head of communications for the Nordelta Residents Association. The capybaras—known as “carpinchos” in Argentina—ate up lawns and massacred rose bushes. They caused traffic accidents, knocking delivery drivers from their bikes. Perhaps worst of all, for a country fiercely devoted to pets, the capybaras began to face off with dogs that confronted them on their new territory, causing injuries to both sides. “Dog owners were very upset,” Canton says. “Especially because here, the dogs are mostly French Bulldogs or other small dogs. They can’t defend themselves.”

A family of capybaras shelter under some hedges in Nordelta, greater Buenos Aires, on March 17, 2022.
Ciara Nugent

In July, a group of residents went to the press, griping about a capybara “invasion” and calling for authorities to move the animals out to a nature reserve. The complaints triggered a huge backlash in both Argentine and international media. Viral posts on social media accused Nordeltans of hypocrisy, since their luxury neighborhood is built on the capybara’s historic wetland habitat, with some dubbing the animals “class warriors.” It didn’t help Nordelta’s case that capybaras are extremely cute, with goofy rectangular heads and narrow eyes that make them look permanently sleepy.

But for all the anger leveled at Nordelta, the neighborhood does have a real problem on its hands: how do you deal with an influx of wildlife that wasn’t there before in densely populated urban space? Cities around the world are increasingly having to answer that question. The expansion of urban areas, combined with the intensifying effects of climate change, is destroying the forests, wetlands and other ecosystems where animals have historically thrived. And at the same time, cities have become “incredibly enriched environments,” often containing an abundance of food, water, and shelter compared to their surrounding areas, says Peter Alagona, an environmental historian and author of The Accidental Ecosystem. The result is that animals losing their natural habitats are increasingly making the city their home.

Nordelta’s confrontation with capybaras is just the beginning. Alagona argues that cities are due for a fundamental rethink of their relationship with urban wildlife. “We need to start thinking about cities as multi-species communities, as potential refuges for creatures that, in the future, we may not see in natural spaces,” he says. “There’s a grand ecological rearrangement taking place and cities are part of it.”

A capybara crosses a street while others eat grass in a gated community in Tigre, Buenos Aires province, on August 27, 2021.
AFP/Getty Images

About 15 miles west of Nordelta, the grass is tall and the air is full of mosquitoes. Wildcats, lizards, and nutria (the capybara’s smaller cousin), roam unseen by humans on roughly 750 acres along the Luján River. Graciela Capodoglio, a former teacher, helped to found this nature reserve in Pilar, a suburb of Buenos Aires, in 2003, around the same time that gated communities began to proliferate around the city. Her goal was to use the space to teach city residents about the importance of protecting nature; today, the reserve is one of the region’s last natural wetlands.

“With all this development, the animals have been corralled into smaller and smaller spaces,” Capodoglio says over the hum of bugs and birds. “And now, the whole country is suffering from a drought,” which further threatens the wildlife here. The clearing of tens of millions of hectares of the Brazilian Amazon and other rainforests, mainly for agriculture, has led, in the last few years, to the disappearance of South America’s “flying rivers,” which once carried moisture across the region. The drier conditions, combined with rising temperature due to climate change, have sapped food and water sources for wildlife, and helped to spread forest fires. In February, as wildfires lapped at the edges of Corrientes in the north of Argentina, newspapers published dramatic images of alligators, capybaras, and other animals fleeing the flames.

Capodoglio was “furious” when she read news stories about the capybara “invasion” in Nordelta. And again, in January 2022, when similar stories popped up about an invasion of tegus—black-and-white lizards native to the region—in gated communities near the Pilar reserve. “The word invasion drives me crazy! They were here first,” she says.

In pre-pandemic times, people concerned about tegus on their properties would contact animal rescue shelters to take them away. But with those centers mostly closed because of COVID-19, Capodoglio says the reserve received a rush of calls from concerned residents. “I try to explain to them that the poor tegu is an inoffensive animal,” she says, noting that the lizards, will cut off their own tails to run away from dogs or larger animals that catch them. “And it helps you keep rats out of your house! Why do we need to look at all animals as attackers? It’s such an anthropocentric view. It pisses me off.”

Over in Nordelta, Canton, of the residents association, says that the group that wanted to remove all capybaras from the neighborhood was a minority of about a hundred out of some 45,000. After the media firestorm, he says, a second group of “environmentalist residents” spoke up, opposing any measures that could affect the capybaras or their urban habitat. “Then finally, a third group in the middle came up, who said ‘okay we have to respect the animals, but what are we going to do?’”

In August 2021, that group made their case for some kind of intervention to the wildlife department of Buenos Aires province and in an open letter in the national press. They pointed out that capybaras had been driven almost to extinction by poachers in Tigre, the municipality where Nordelta is located, by the 1990s, and that the creation of the gated community—where hunters don’t venture—had saved the animals. But, they argued, the area “could no longer feed or sustain” today’s numbers. The province agreed, based on their observations from a visit in June, that there was an “overpopulation” problem. They then began to work with the municipal government and the Nordelta residents association—which acts almost like a local government because of Nordelta’s private status—on a plan to restore “harmonious coexistence” between capybaras and humans, according to Canton, consulting with capybara experts at Argentina’s national scientific research council, and a team of biologists hired by Nordelta.

Limiting capybara numbers is part of the plan. Officials have ruled out the idea of moving some capybaras to nearby nature reserves—suggested by the residents to bring the population back to the level it stood at five years ago—on the grounds that they had not learned to fear their natural predators and wouldn’t last in the wild, Canton says. And there will, “of course,” be no culling of the animals in Nordelta, he adds. But capybara vasectomies are on the table. The province is consulting with vets before giving the greenlight for a trial, which would follow a few dominant males and monitor them for several years. A deer vasectomy program with similar goals in Staten Island has resulted in a “sizable decrease” in the deer population since 2016, but proved controversial among residents and conservationists. “That is a mid- to long-term solution,” Canton says, “and it’s the only less natural measure that’s under consideration.”

For now, the focus has been on softer measures. First there was an awareness campaign, using newsletters, social media, and outreach to local press to remind residents that capybaras are generally harmless and ideally are dealt with by simply ignoring them.

Next, the residents association began creating new habitats for the capybaras inside Nordelta, so they wouldn’t need to resort to gardens. The human residents stopped cutting the grass so often in public parks and near lakes, to make it more comfortable for capybaras, and left some areas on the edges of town to go wild. Then they installed three “buffer zones,” made up of reeds and bushes for the animals to shelter in, at the edges of lakes within the neighborhood. Three more are under development, along with another site at a currently polluted stream that enters Nordelta from the north.

Canton says the creation of these newly rewilded areas has helped keep capybaras away from residents. The real test, though, will come in the next few months, as the dry winter season in Argentina puts pressure on the giant rodents’ food supply.

Capybaras eat grass next to a street in a gated community in Tigre, Buenos Aires province, on August 27, 2021.
Magali Cervantes–AFP/Getty Images

As the global conversation around the importance of preserving biodiversity gets louder, many cities are trying to change their designs to enable humans and animals to share urban space in a climate-changed world. In London, for example, the largest landowners in the central West End district are adding vegetation to roofs, walls and streets to create more of the plants needed by native birds, bees and bats. Wildlife bridges, which allow animals to safely cross roads or railways that have divided parts of their habitats, are in vogue in many cities: a network of reindeer viaducts are being built across Sweden, the largest ever animal overpass is under construction in Los Angeles, and in late 2022 Houston will open a “landbridge” connecting the two sides of its Memorial park, which have been separated for a century. Even buildings are being rethought: last year, it became mandatory for new buildings in New York City to incorporate bird-friendly elements, such as patterned glass to prevent crashes.

The increasing threats of flash floods, heatwaves, and drought are prompting cities to restore green space and trees, which can absorb water and regulate temperature. Local governments should recognize that animals have their own “ecosystem services” to offer, argues Alagona. Rather than employing companies to exterminate rats, for example, cities could plant more trees that are conducive to owl nesting habits, and manage power lines better to prevent owl deaths. “If we have more owls, we definitely have fewer rats,” he says. “By thinking about wildlife and coordinating across different departments, we can create an environment that’s healthier for everybody.”

Correction, May 9: An earlier version of this story incorrectly stated that the landbridge in Houston’s Memorial Park opened in March 2022. The bridge is still under construction and will open in late 2022. 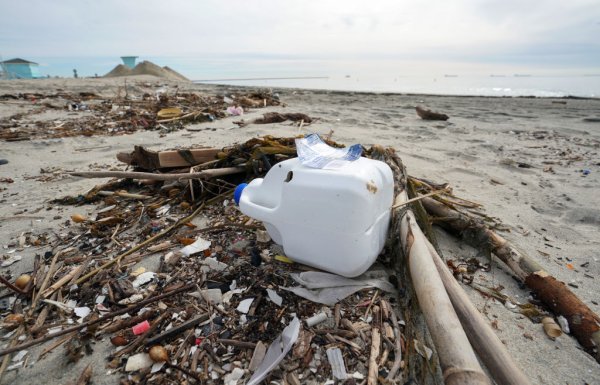 Big Oil Sold the World on a Plastics Recycling Myth. It May Be Too Late to Undo the Damage
Next Up: Editor's Pick