Growing up, the now Tony-award winning actor Renée Elise Goldsberry often wondered how someone got discovered. She recalls being at the grocery store and thinking about whether she could get noticed there. “It was one of those things that crossed my mind and then I forgot about it,” Goldsberry tells TIME. “But Wickie has never forgotten. Whether she’s at the restaurant or the recording studio, she’s always prepared for somebody to notice her and give her a bigger shot.”

Goldsberry is referring to Wickie Roy, the outrageous scene-stealing character she plays in Peacock’s Girls5eva. The show, which premiered last year, also stars Sara Bareilles, Busy Philipps, and Paula Pell as members of a ‘90s girl group that reunites in the present day. Filled with clever songs (see: “New York Lonely Boy”) and rapid fire jokes (the series was created by Unbreakable Kimmy Schmidt alum Meredith Scardino and produced by Tina Fey), Girls5eva follows the antics and truly feel-good moments between four women who genuinely care for each other.

Wickie is the group’s center: a diva with killer fashion sense who never gave up on the dream that she would be famous. After spending most of season 1 convincing her band members to believe in her dream, too, Wickie and the rest of the group see where their newfound success will take them in season 2, which arrives on May 5. Goldsberry, a Broadway veteran who originated the role of Angelica Schuyler in Hamilton and plans to release her own album this year, spoke to TIME about working on the show, what she’s learned from playing such an eccentric character, and why it’s important to never say no to yourself.

TIME: What excites you most about Wickie’s character development in season 2?

Wickie has been the engine behind Girls5eva’s comeback and season two starts with the group having momentum without her, which gives her a slight bit of room to figure out some other areas of her life. It’s interesting to see her tiptoe into a personal life and something outside of “hashtag album mode.”

She’s pretty self-centered and ridiculous, but you still want to root for her. How do you find her humanity?

I understand the pain of feeling as though a dream might not happen, or that you had an opportunity and that you blew it because of, perhaps, some bad behavior. Wickie is a little oblivious about a lot, but she is aware of the mistakes that she made that stopped her career. We can relate to the pain of that. Life has been very humbling for Wickie.

What’s the most rewarding part of portraying her?

The freedom of letting so many bad instincts fly without having to swallow them. There’s a part of everybody that wants to push to be in the center of a picture. I very much enjoy letting Wickie be as big and as styled and as unapologetically ambitious as she is. Some of the differences in her personality are good for me.

She’s really driven by a hunger to succeed. Do you relate to that?

Absolutely—it’s pretty beautiful and one of my favorite things about this show. I don’t know that women know that they’re allowed to be ambitious as they get older especially when they are facing all kinds of societal pressures that make it seem inappropriate to dream. But these women are doing it—that’s why you root for them in all of their craziness.

Did you come to learn that, about ambition, from working on the show?

I’m extremely ambitious, but actually find my greatest peace when I’m at home. I haven’t necessarily found peace in my life without some combination of trying to move my professional life forward and my personal life forward. I’ve made a choice to prioritize my personal life, but, fortunately, I haven’t yet had to choose one or the other. Wickie has not allowed herself that—it’s only ever been professional. It’s one of the things that I love about playing her. There are some lessons I’ve learned in my life that she has an opportunity to learn and she desperately needs to. Then there are some things that she just naturally knows that I need to learn. One of them is how much more creative I can be with my hair! The other one, really, is to not be ashamed of a big dream.

I heard you once say in a podcast that dreams come true when you say them out loud. How has that mantra informed your work?

I do believe very much in surrounding yourself with people that inspire you and talking a lot to them about what you want. Dreams that are stuck inside can become cancerous and so the first stage towards moving forward in life and actually giving birth to something that’s important to you and necessary for the world is saying it out loud.

Sometimes saying that kind of stuff out loud can be really scary. What do you say to someone who is afraid to voice their dream or ambition?

I say what I have to tell myself every day: you do it afraid. One of the most important things to say out loud is that you are afraid. The biggest thing to remember is we don’t have forever, and being paralyzed in fear, which I feel often, feels worse than doing something afraid.

What’s the best advice you’ve ever received for dealing with rejection?

Don’t say no to yourself. The most unforgivable rejection is when you don’t give yourself the opportunity because you’re so afraid of the no—if you’ve decided before everyone else why you shouldn’t have it or why you won’t get it. Nobody is without rejection. When you look at people that you might think are more successful, it is not because they haven’t been rejected. It’s because they have and they figured out how to keep going. It’s the relationship with rejection that’s different.

Has the reception of the show surprised you at all?

We have so much fun making it that it just feels right that people would enjoy watching it because they’re watching people have a really good time. They’re watching people desperately in love with each other. It sounds basic, but we’ve shot the show two seasons in a row in a surprising COVID winter and the show has really saved us. That’s what we’ve learned about humanity and what’s so crucial about art— how it helps us survive impossible challenges. In a world that is increasingly unrecognizable, here we are in the middle of it laughing. 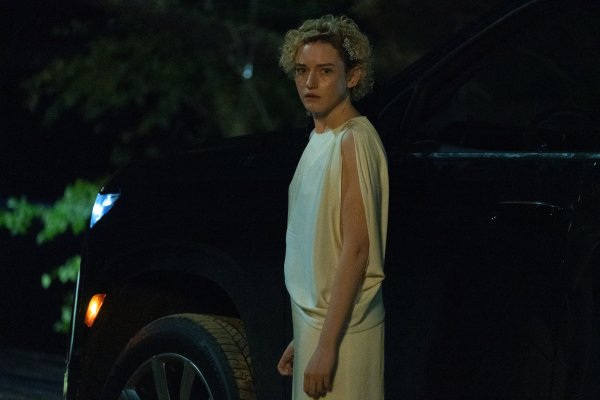 A Spoiler-Filled Chat With Julia Garner About Her Ozark Character's Fate
Next Up: Editor's Pick