'What a Journey.' Endurance Runner Adds Two More to Her Unofficial Record for Consecutive Marathons

Jacky Hunt-Broersma, left, gets a hug and a kiss from her husband, Edwin Broersma, after she finished her 102nd marathon in 102 days, this one at Veterans Oasis Park Thursday, April 28, 2022, in Chandler, Ariz.
AP Photo/Ross D. Franklin
By WILLIAM J. KOLE / AP

When amputee athlete Jacky Hunt-Broersma says her mantra is, “I can do hard things,” she’s not kidding — the amputee athlete has run 104 marathons in as many days, all using a carbon-fiber prosthesis.

Hunt-Broersma, 46, completed that epic quest on Saturday near her home in suburban Phoenix, setting an unofficial world record along the way.

“What a journey,” she tweeted.

The South Africa native, who lost her left leg below the knee to a rare cancer, gained worldwide attention and a huge social media following after beginning her record attempt on Jan. 17.

Brick Runners, an organization that supports athletes who raise money for charities, even designed a Jacky-inspired Lego-style character complete with one of her favorite T-shirts, which reads: “Strong Has Many Forms.”

Every day since mid-January, she covered the classic 26.2-mile (42.2-kilometer) marathon distance either on a loop course laid out near her home in Gilbert, Arizona, or on a treadmill indoors.

Her original goal was to run 100 marathons in 100 days so she’d beat a record of 95 set in 2020 by Alyssa Amos Clark, a nondisabled runner from Bennington, Vermont, who did it as a pandemic coping strategy. But last month, after nondisabled British runner Kate Jayden unofficially broke Clark’s record with 101 marathons in 101 days, Hunt-Broersma realized she’d need to run at least 102.

In an interview with The Associated Press, she said she hoped her quest would inspire people everywhere to push themselves regardless of their physical limitations.

Guinness World Records spokesperson Amanda Marcus said the Britain-based organization was aware of Hunt-Broersma’s attempt, and that it would take 12 to 15 weeks to review the evidence before the record can be confirmed.

Guinness lists the men’s record for consecutive daily marathons as 59, set in 2019 by Enzo Caporaso of Italy. 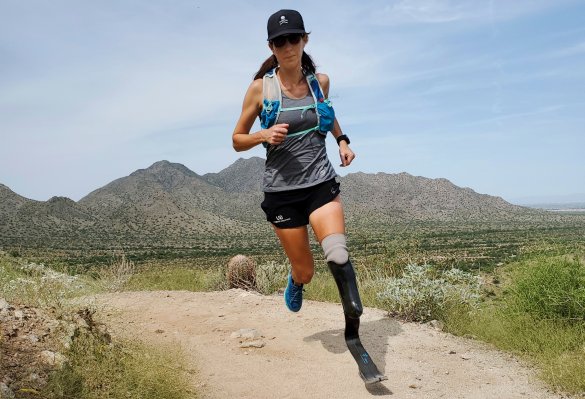 Unofficial Women's Record Set with 102 Marathons in 102 Days
Next Up: Editor's Pick