The Memories That Sustain Me on Mother's Day

I keep replaying my favorite memory of my mother: I was 11 and we were vacationing on the Adriatic coast of Croatia, about a four-hour drive from our hometown of Sarajevo, Bosnia. After spending all day at the beach—swimming, playing cards, and snacking on syrupy figs from a nearby tree—I watched as one by one, families of beachgoers packed up their towels and colorful umbrellas, likely headed to dinner followed by a lazy stroll through town.

“Let’s stay another hour,” Dad said. “This is the best sun.”

As much as I longed to join the masses in their slow migration to the hotels and seaside restaurants, I had to agree: The rich orange glow that had just spilled over the horizon felt soft and luxurious on my skin, revealing tiny salt crystals in the peach fuzz of my arms.

A ship appeared in the distance, headed for the nearby docks. Mom squealed like a small child and shot up from her folding chair. She grabbed my hands and pulled me off the beach towel, and we beelined for the water. We sat down in the pebbly shallows and locked arms, giggling with anticipation of the first wave stirred by the ship. The swells crashed into us in quick succession, flinging our legs in the air and pulling us under. As we emerged to the surface, we laughed while also trying not to swallow too much salty water or let go of each other.

Read More: ‘Of Course She’s Not O.K.’ The Conversation That Changed How I Thought About Early Motherhood

Every time I replay this memory, I savor every minute detail until I can almost taste the briny cocktail of Coppertone sunscreen and frothy seawater. My mother died nine years ago from heart disease. I miss her so immensely that the grief I feel no longer exists in the same space with my other emotions. Instead, it has carved out its own singular realm and like breathing—it is ever-present and subconscious.

Less than a year after our Adriatic vacation, war broke out in Bosnia, and for the next four years, my whole family lived under siege in Sarajevo. Mom’s love and sacrifice remained undiminished by the horrors of our daily lives. She walked to work every day in a city where most intersections were sniper alleys, risking her life for a paltry salary and a warm lunch which she stowed in a plastic container and brought home for all of us. One evening, she got back and with a fancy flourish of her hand—as if she were a magician—pulled an egg out of her purse. I had not had an egg in months.

My mother was slight, but her frame belied her grit and resilience. She was beautiful and in her university photo she looks like a young Elizabeth Taylor in Cleopatra. She insisted on wearing heels, jewelry and makeup, and a few spritzes of Chanel No. 5, as she walked 10 kilometers to get to work—every step of the way in danger from the blasts and bullets. She was brave and defiant, but also funny and stubborn like the time she accepted Dad’s challenge to quit smoking by listening to the hypnosis tapes he had given her for her birthday. She followed every cue—“lie down, close your eyes, repeat ‘I am a strong, confident woman who doesn’t need cigarettes in her life’”—all with an impish grin and a lit cigarette in her mouth.

Read More: The Pandemic Has Meant I’m Rarely Away From My Children. Am I Still More Than a Mom?

She fought fiercely for my survival, and against all odds secured my escape from Sarajevo, which led me to my new life in America. Sadly, my new lease on life also caused the tight fibers of our family to loosen over time. We lived on separate continents for well over a decade, visiting each other only every couple of years. Our love never faltered, but we missed so many small and important moments together. Each visit felt like a desperate attempt to make up for lost time. The stakes felt so high and the pressure to cram in as many activities and as much life as possible sometimes made us buckle. In hindsight, I wish we had not done so much running around, but instead set aside a few hours just to sit and talk.

On the first Mother’s Day after she died, I walked into an elevator in my apartment building and was met by a woman in her 60s locking arms with her mother who must have been in her late ’80s or early ’90s. They were beautifully dressed and chatty—giddy even. It made me flinch inside.

“I’m taking my Mom for a nice brunch,” the daughter offered and smiled generously at her mother.

I smiled back and quickly mumbled “have a nice time” before slipping out as soon as the doors slid open. Out of sight, I gulped mouthfuls of air and let out a stifled, jagged cry throbbing with jealousy and anger.

“That woman is twice my age and she still has her mother!” I hissed to myself.

Read More: Motherhood Is Hard to Get Wrong. So Why Do So Many Moms Feel So Bad About Themselves?

I knew my rage was irrational and I had no ill will toward those women, but I just wanted my mother. To this day, the sight of an elderly woman with silky gray hair and delicate features sends me into a tailspin of questions: “Would my mom look like that? Would she wear her hair long and pinned in a bun or would she have short hair? Would her hands be slim and elegant? Would she still wear all her jewelry and makeup?”

I’ve inherited my mom’s beautiful rings and I keep them in several see-through containers in my closet. Every few months, I sit on the floor surrounded by clothes and hangers and carefully select a box to open. I choose just one, because I must ration the sweet lingering perfume trapped inside them. I put my nose inside the container and take a long, greedy whiff before I quickly close it again. For a few minutes, I am dazed and shot full of adoration—and although my chest feels hollowed out, it is still too small to contain all my emotions.

For the past nine years, I have felt as if a thick, warm coat that kept me insulated against the outside chill has been pulled off with one swift motion. I am exposed to life’s elements. Still, I am learning to wrap myself in every detail, smell, and color of those happy memories until the chill relents just a little and I am warmed by the rich orange glow of the early evening sun. 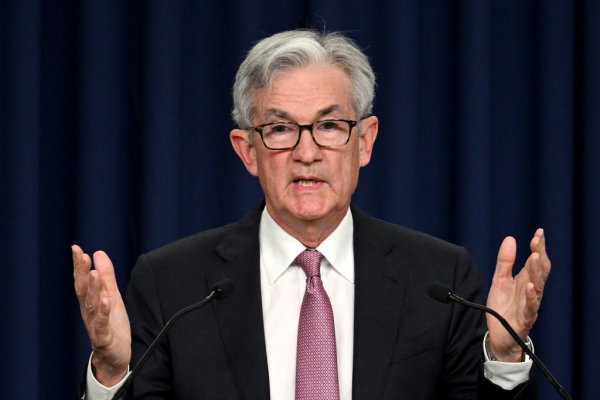 The Fed Can't Fix Our Broken Banking System
Next Up: Editor's Pick