Goodnight, Moon: Why the Lunar Lights Will Go Out Tonight

Thanks to the artificial lighting that washes out the glory of the night sky in many parts of the developed world, it’s hard to understand why the ancients were in such awe of the heavens. Step outside at 3:07 a.m. E.T. on Tuesday, though — assuming the weather is clear — and you’ll see something that almost certainly threw your distant ancestors into a panic. At that moment, the full moon will complete a transition from its usual silvery white brilliance to an ominous, coppery red. It’s a phenomenon known, with appropriate horror-movie overtones, as the Blood Moon.

What it actually is depends on whom you ask — or asked. The ancient Maya believed it was caused by a cosmic jaguar swallowing the moon; the Chinese agreed — except that it was three-legged toad doing the swallowing. And then there’s megachurch pastor John Hagee, who insists it’s a sign of a “world-shaking event” right around the corner.

Ask a scientist, though, and you’ll get a more prosaic answer: the moon, moving on its age-old orbit, will simply pass through the Earth’s shadow. The whole thing takes 78 minutes, and during that time the moon will look utterly weird. It won’t go entirely dark because sunlight is scattered as it passes through Earth’s atmosphere — the bluer parts of the sun’s rainbow of colors bouncing every which way (which is why the sky looks blue) and the redder parts streaming right through (which is why the sun and sky look red at sunrise and sunset). That’s part of it: the other part is that those red rays get bent as they pass through the atmosphere, just as though they were traveling through a lens — and some of those red rays are inclined at such an angle that they fall on the moon.

Totality — the time when the moon is completely shadowed — lasts less than an hour and a half. But a subtle darkening will start at 12:54 a.m. E.T., as the leading edge of Earth’s shadow begins to cover the moon. The full shadow (or maybe it’s the toad) begins to bite at 1:58 a.m. The whole thing is entirely over, with the trailing edge of the shadow leaving the moon its familiar silvery white again, at 6:37 a.m. If you miss it all, don’t worry: the whole thing happens again on Oct. 8 of this year, and again on April 4 and Sept. 28 of next year.

This four-fer is known as a tetrad, and there are eight sets of lunar-eclipse tetrads this century: the last was in 2003–04; the next will be in 2032–33. (Total lunar eclipses don’t happen every month, or even every year, because the moon’s orbit is tilted with respect to Earth’s orbit around the sun. As a result, the moon usually passes just above or just below Earth’s shadow, and only occasionally goes right through it.) So it’s all very scientific — nothing mystical or prophetic about it. Although you might not mention that in St. Louis: it was on the night of a total lunar eclipse back in 2004 that the Red Sox beat the Cardinals in the fourth game to win the World Series for the first time in 86 years. 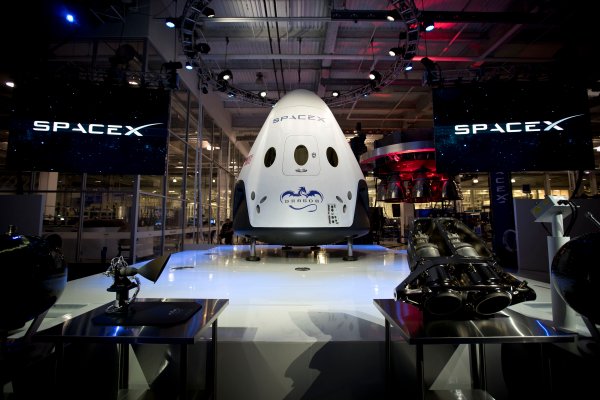