Lost for Decades, Dorothy's Dress From The Wizard of Oz Is Up for Sale

A blue and white checked gingham dress, worn by Judy Garland in the "Wizard of Oz," hangs on display, Monday, April 25, 2022, at Bonhams in New York.
AP Photo/Katie Vasquez
By DEEPTI HAJELA / AP

NEW YORK — It’s one of the most recognizable outfits in American movie history, the blue-and-white checked gingham dress a young Judy Garland wore as Dorothy in the classic 1939 movie “The Wizard of Oz.”

For decades, one of the versions of the dress Garland wore in the movie was assumed lost at Catholic University of America, where it had been given to someone in the drama department in the early 1970s. But the clearing out of some office clutter last year led to the finding of the dress in an old shoebox, and now it’s headed for the auction block.

When she first saw it, “all I could think about was watching the movie when I was a child and growing up with” it, said Jacqueline Leary-Warsaw, dean of the school of music, drama and art at Catholic University, in Washington, D.C. “In a way it was like I was looking at my past childhood.”

She and others are hopeful that nostalgia factor will come into play when the costume goes up for sale at Bonhams “Classic Hollywood: Film and Television” auction on May 24 in Los Angeles, where it has a presale estimate of $800,000 to $1.2 million. Bonhams has the dress on display this week at the auction house’s New York location before it is sent to California for public view and then auction.

Helen Hall, director of popular culture for Bonhams, said that the market for memorabilia, and film costumes in particular, is strong, and that “The Wizard of Oz” is a cultural touchstone.

People “very much remember the first time they saw the film, the effect it had on their lives,” she said. The film is renowned for its music, its dialogue and its visuals, particularly when Dorothy goes from drab, sepia-colored Kansas to gloriously multicolored Oz.

The Tin Man (Jack Haley), Dorothy (Judy Garland) and the Scarecrow (Ray Bolger) set off on their quest for fulfillment in the children's classic 'The Wizard of Oz', directed by Victor Fleming for MGM, 1939.
FPG/Hulton Archive/Getty Images

There was more than one of the costume made for Garland while filming. Hall said that four are known to exist and that only two, including the one found at Catholic University, are with the blouse she wore underneath. Bonhams sold the other one with a blouse at an auction in 2015 for more than $1.5 million.

(There are also some surviving pairs of the ruby slippers Garland wore, with one pair in the collection at the Smithsonian.)

The rediscovered dress had initially been given to Father Gilbert Hartke, who was then head of the university’s drama department, in 1973 by actress Mercedes McCambridge, Leary-Warsaw said, although it’s not clear how McCambridge came to have it.

Somehow, in the years that followed, the department lost track of the costume until it became “something that people had thought was just a myth,” she said. Last year, during preparations for a renovation, a bag containing the shoebox was opened, and there it was — though how it got to where it ended up remains a mystery, Leary-Warsaw said.

The dress was in good condition, aside from a piece that had been cut away, while the blouse was more fragile.

In researching the dress, it was determined that Garland wore it in the movie in the scene where she is confronted in a castle by a threatening Wicked Witch of the West.

The school decided to auction it off instead of keeping it, and plans to use the proceeds from the auction sale to create a full-fledged film program in the drama department. 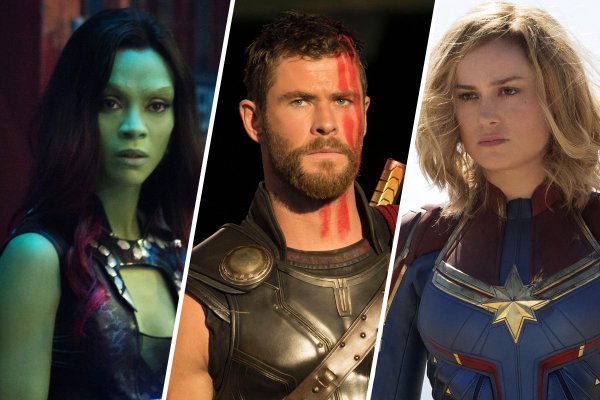 What's Next for the Marvel Cinematic Universe
Next Up: Editor's Pick