A resident being tested for Covid-19 in Beijing on April 25, 2022.
NOEL CELIS/AFP via Getty Images
By Bloomberg

China’s coronavirus outbreak worsened as rising cases in Beijing sparked jitters about an unprecedented lockdown of the capital, with policy makers racing to avert a Shanghai-style crisis that’s already wrought havoc on the financial hub.

Worries that the country’s strict adherence to Covid Zero will further damage the economy dragged down stocks to oil and iron ore on Monday. It’s also sparked a bout of panic buying as Beijing residents — fearful of being caught unprepared in the event of a citywide shutdown– rushed to stock up on supplies after the government announced mass testing plans and put some areas under lockdown.

The city of more than 20 million people and the country’s political center has sealed off dozens of residential compounds and told inhabitants of the eastern district of Chaoyang to be tested three times this week after dozens of infections were found over the weekend. Officials have warned of more cases in coming days, with Beijing city government spokesman Xu Hejian saying late on Friday that the current outbreak is “complex and stealthy” while vowing to take further measures to prevent its spread.

Read More: The Chinese Public May Have Had Enough of Zero-COVID

The flareup comes as Shanghai reported a record number of fatalities and imposed stricter rules to try and stamp out infections. The twin outbreaks in two of China’s most significant cities has become an unprecedented test for President Xi Jinping, who is likely to seek a third five-year term during a Communist Party congress later this year.

China has repeatedly defended Covid Zero, saying the policy saves lives and keeps the economy going, even as the strategy increasingly darkens the country’s growth outlook and threatens to disrupt global supply chains.

People wait in line to be tested for Covid-19 in Beijing on April 25, 2022.
JADE GAO/AFP via Getty Images

Chinese stocks slumped and the onshore yuan fell to its weakest in a year. Iron ore futures slumped more than 11%, while oil dropped about 3% to trade below $100 a barrel.

Beijing has already locked down some residential compounds around the Chaoyang district — home to some 3.5 million people, including many expats, the central business district and most foreign embassies. It has designated 14 smaller communities as “sealed” and another 14 as “controlled” areas with different levels of movement restrictions.

Local authorities will test people who live or work in Chaoyang on Monday, Wednesday and Friday. That’s everyone from white collar workers to young children who need a negative result to attend kindergarten.

Long lines are already snaking around apartment complexes as residents wait for tests. Online and brick-and-mortar grocery stores have sold out of fresh food, kitchen staples and other basics like masks and antiseptic.

Residents in the capital are worried about a repeat of the crisis that’s snarled Shanghai for almost a month and seen people unable to reliably access food or medical care. Beijing authorities are beefing up supplies, delivering fresh vegetables to parts of Chaoyang that have reported positive cases. Meituan and other grocery delivery apps have also increased manpower by as much as 70% to help sort mounting orders and race to deliver them to people’s doorsteps on the same day, local media reported.

People buy food and household provisions at a supermarket in Beijing on April 25, 2022.
NOEL CELIS/AFP via Getty Images

In Shanghai, the misery continues with officials ramping up containment efforts as cases in the community continue to crop up despite mass isolation, testing and lockdowns. Over the weekend, fences were installed in some neighborhoods to seal buildings where positive cases have been found, sparking renewed frustration among residents already stuck inside their homes for weeks.

The financial hub remains the epicenter of China’s worst outbreak since Wuhan more than two years ago. It reported 51 fatalities on Sunday, mostly elderly people, which took deaths in the current wave to 138. There are 196 patients in severe condition and 23 in critical condition.

Read More: In China, COVID-19 Is Separating Children From Parents

China has dispatched a total of nine medical teams to step up treatment of severe cases to eight designated hospitals in Shanghai, Xinhua reported on Sunday. The teams are composed of over 360 experts with intensive care experience.

Shanghai reported 19,455 new cases on Sunday. While daily infection numbers are on a broadly downward trend, the government still hasn’t reached its goal of eliminating spread in communities. 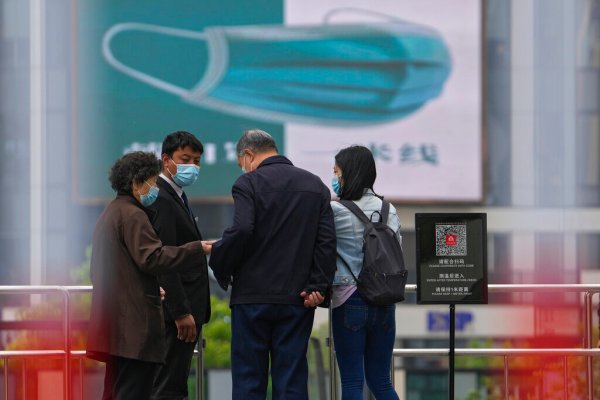