President Joe Biden delivers remarks on gas prices in the United States from the South Court Auditorium of the White House on March 31, 2022.
Anna Moneymaker—Getty Images
By Philip Elliott

The President was riding high. The American public had rallied behind him to support direct military intervention for a country invaded by its neighbor, to back the still-nascent democracy in Eastern Europe, and to cool tensions with a Cold War rival.

Then-President Bush was having a moment in April of his second year in office—exactly where Biden sits today. The end of the Cold War reset the global order. The public made Bush a rockstar as U.S. forces stepped in to help push Saddam Hussein back across the border into Iraq from Kuwait, American dollars were flowing to help Poland’s pro-democracy movements, and the once-branded Evil Empire grounded in Moscow seemed to have collapsed. The Berlin Wall was down and Bush’s poll numbers were up, parked in the mid-70s.

Compare that to Biden. The public has meager interest in supporting Ukraine’s defense against an invading Russian force, although there is zero appetite for sending U.S. troops to repel the aggression. Biden’s domestic agenda, including his signature but stalled social-spending plan, seems stuck in park, if not reverse. Inflation is at a four-decade high, workers are walking away from unrewarding jobs, and Cold War tensions seem to be warming with each passing cluster bomb into Ukrainian suburbs.

And yet, after a brutal challenge from his right flank on taxes, the first President Bush still lost his re-election bid in 1992 despite some of the highest polling seen since Lyndon Baines Johnson stepped in after the assassination of John F. Kennedy. Bush 41 stood at almost 74% approval at this point in his term. Biden, by contrast and facing many of the same thematic challenges of late-Cold War politics, sits at just better than 41%. One of those 41s is sexier than the other in the political universe.

This is the reality Democrats are facing. Politico rightly described insiders’ diagnosis that Democrats are sleepwalking toward a disaster this fall. With the notable exception of the first midterms after 9/11, the parties of the incumbent President lose House seats in their first at-bat with midterm voters; Bush’s Republicans lost eight seats in 1990, a number that today would be enough to take the gavel away from House Speaker Nancy Pelosi. Biden is not exactly an asset in battleground states. Candidates aren’t looking to him for backup. The Trumpian wing of the GOP is fighting to dominate in primaries, the longstanding Democratic money machine isn’t flowing cash to races, and viable candidates aren’t locking arms with the party. Just consider Democratic Sen. Maggie Hassan of New Hampshire, who is on the ballot this year and this week visited the southern border to back a Trump-era immigration policy.

To be sure, Biden’s economic stats are a mixed bag. He’s presiding over a huge market for new hires. The possibly-post-COVID-19 environment could give the U.S. economy generation-changing power. But at the same time, inflation is a very real drag on the lived experiences of voters. The Consumer Price Index change, to be a nerd for a minute, is almost double what it was when H.W. lost his re-election bid. And voters—especially Democrats—seem uninspired at the moment.

All of which is to say this: Bush 41 and Biden came to the White House after decades working the Washington systems they knew so well. Both foreign policy heavies who spent eight years as the understudies to the presidency itself, they seemed like some of the most prepared candidates for the job ever to take their oaths. Early wins abroad teed up their reelection bids. But an American public indifferent to global affairs and a glitchy mismatch of economic factors soured sentiment at home.

Sure, many Presidents with sleepy polling at this point in their first terms went on to win second terms. Barack Obama and Ronald Reagan were both parked in the 40s at this same point, for instance. But there aren’t a lot of examples in the modern era of a President turning around his standing from this low of an ebb, especially if the midterms are going to be as brutal for Democrats as analysts anticipate. A blowout election doesn’t exactly inspire confidence or bring tailwinds. And, at the moment, Biden could use more of a hurricane than a breeze. If Bush is any indication, denying the political winds may be easy to justify in the West Wing but impossible to ignore at the ballot. 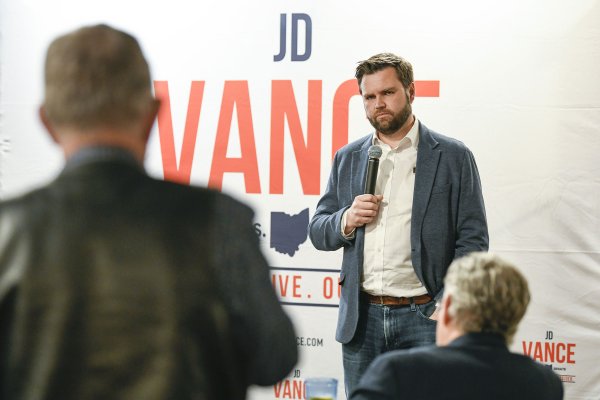 J.D. Vance Praised France's Popular Vote Elections. Why That Misses the Point
Next Up: Editor's Pick