Molly Shannon Is as Real as Ever in Her Charming Memoir Hello, Molly!

There is a moment, about halfway through Molly Shannon’s incredibly charming memoir, Hello, Molly!, that stopped me in my tracks. After describing years of striving in show business, then finally making Saturday Night Live, Shannon makes a confession.

She’d spent years waiting tables in Los Angeles at a place called Cravings. She was good at it, and as a bonus, ran live shows with friends for which she had a call list of hundreds of names to pack the house (500 calls usually meant about 200 people showed up). She was 29. People could see that she was talented, but anyone who’s ever pursued a career in the arts knows that talent alone is often not enough. The dramatic acting she’d intended to pursue and studied at New York University hadn’t worked out. She had a friend with whom she ran a scheme, getting one another auditions by pretending to be David Mamet’s assistant, and it had gotten them through plenty of doors but never the right one.

And then, SNL: a call for an audition, a flight to New York. Her ability to seek people out, form relationships, and follow up with them, her ability to, mid-audition, pull herself together when she felt she might be bombing, all finally paid off. Few people thought Shannon’s now-iconic character Mary Katherine Gallagher was a good idea—she chose not to use her in the audition—but in the vein of most everything Shannon had done up until then, she eventually followed her gut and got Gallagher a sketch on the show. And she was a smash. “It was such a great lesson to really write from your heart—write from yourself—what’s true, not reacting to boys, just being a girl and being yourself and writing from your heart,” Shannon writes. “It blew my mind how many people responded to it… It came from within.”

She was getting stopped on the street. All those years and finally this.

But then, Shannon writes—and this is what stunned me—”The one person I wanted more than anyone to tell me I was good was my mom.” Shannon had chased success hoping for something in return that she would never get. Her mother was never coming back. “I realized I’d been running for years, driven to work so hard, on this track, trying to make it, to achieve, and when I finally got there… there was that ache.”

The celebrity memoir is an odd enterprise. A story is meant to be interesting because a person is famous, except fame is such an arbitrary, slippery thing. It can feel like an attempt at understanding an equation: this much childhood damage, combined with this much passion and ambition, combined with this much luck. Shannon’s mother died when she was four, a car accident in which her dad was at the wheel. Her baby sister and her cousin also died; she, her sister, and their father survived. These losses propelled and shaped her, that ache.

Read More: How Celebrity Memoirs Got So Good

But it was also the extraordinary relationship she has with her father, James Shannon, “the Mama Rose to my Gypsy Rose,” that kept her steady enough to push on. He “encouraged mischief,” tearing clothes off of mannequins to make his daughters and their friends laugh. Shannon writes that he “gave me a kind of freedom few other girls had.” “Super-charismatic,” he also had a quick temper and sometimes struggled with alcohol: “I either adored my dad or was frustrated and at the end of my rope.” It’s the complexity and intensity of this relationship, combined with Shannon’s incredible humanity, that seems to have built this particular star—or superstar, if you will. After making her mark on SNL, Shannon went on to have roles in a string of films and TV shows, including A Night at the Roxbury, How the Grinch Stole Christmas, Wet Hot American Summer, Hotel Transylvania, Enlightened, The Other Two, and The White Lotus.

Shannon offers a sort of advice from time to time, a philosophy of hard work but also talking to everyone, making connections, and not being afraid to come up with absurd schemes. If I were to pull out any of the platitudes that she offers from the text, I’m not sure they’d feel like much. But they do work, within the context of her story, because it’s so clear throughout all these pages that Shannon actually means these things. Like the way she threw her body through the wall those years on SNL, the way she always seems to inhabit her characters with her entire self, to feel fully possessed by whatever it is she’s tasked to do or wants to be. “I learned to trust myself,” she writes. “That somewhere deep in my gut I knew not to over-rehearse but to just let it rip.”

The book ends on a couple stories about Shannon as mother herself to her own two kids. Each of the anecdotes is brief, and she skips over most of the early years of motherhood. But the moments that she offers are ones that might, in a different type of parent, engender frustration, anger, or panic—a towed car, running out of gas—but instead show Shannon pulling from a seemingly endless well of groundedness. Each relays her willingness to reach for fun in times of discomfort. “I always ask Stella and Nolan, ‘Do I seem like a stressed-out mom or a happy mom?’” she writes. “And they say, ‘You seem happy.’”

If there’s an alchemy to what makes Shannon who she is, it seems as much about that ache she describes as the solidity and play that she shows toward the book’s end. For every story of loss, of striving, and of doubling down in Hello, Molly!, there is also a determination to find joy and pleasure, to foster community, and to laugh. This seems, in part, to have come from her father, and the intensity and constancy of their relationship—but also from something ineffable inside of her. 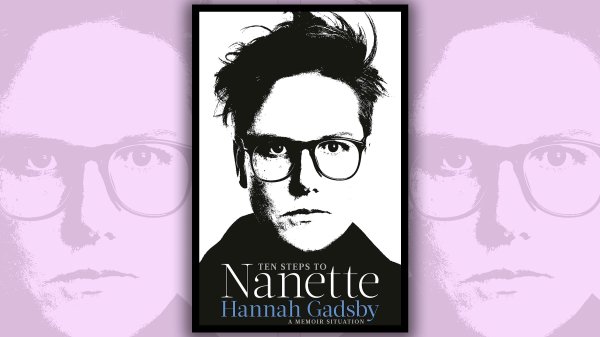 Hannah Gadsby Threatened to Quit Comedy in Nanette. Her New Memoir Proves She's Not Going Anywhere
Next Up: Editor's Pick