Why You Probably Don't Need to Worry About 1970s-Style Stagflation

March 18, The Mobil station at the corner of La Cienega and Beverly advertise prices higher than the norm throughout the Los Angeles area.
Robert Gauthier-Los Angeles Times
Ideas
By Zachary Karabell
Karabell is an author, investor, and commentator. His latest book is Inside Money: Brown Brothers Harriman and the American Way of Power.

The Seventies were famous for many things: wide-lapels, disco music, Watergate, the middle-class abandonment of cities for suburbs, and of course, stagflation, that toxic blend of soaring prices and stagnant economic growth. Two-things in particular marked stagflation: sudden supply shocks of oil after OPEC embargoed Western countries over support for Israel after the 1973 October (Yom Kippur) War and a U.S. Federal Reserve that was too slow to react.

Now, the Seventies seem suddenly relevant again, and not in a good way. With oil prices soaring in response to the growing Western embargo of Russian oil and with the Federal Reserve belatedly responding to inflation that has been above 7% for months, many are rightly concerned that we are heading back to a Seventies scenario. “Stagflation,” quipped one investor among many, “is coming.” Others have concluded that the cake is, as they say, already baked: “Stagflation is here. Is Recession Next?”

Headlines and commentary suggest that the answer is clear and ominous. Perhaps. But as much of the present has echoes of what unfolded fifty years ago, we shouldn’t be so quick to draw lines between then and now. Yes, the similarities of oil plus rising rates plus inflation and slowing economic growth are undeniable. But no economy is composed of only four variables, and the world today is as different from the early 1970s as the early 1970s was from the early 1920s. History can be a guide, but it is so rarely a model.

The case of why now is a redux of then is clear: economic growth (GDP) for the first months of this year looks to be anemic in the U.S. and Western Europe, coming off a strong 2021. Rising gas and fuel prices will put a dent in consumer budgets and lowers the profitability of companies. The prospect of higher-interest rates triggered by the Federal Reserve, which is beginning to follow through on what it has signaled will multiple rate increases this year, has already led to a very sharp stock market correction for companies that thrived during the pandemic. And now the western economic retaliation against Russia for its invasion of Ukraine has added another element to global instability.

The war in Ukraine not only adds a massive dose of uncertainty; it also casts a pall on many assumptions of what the world is. While Russian naked aggression is not inconsistent with its past behavior, this time Western nations shook off years of lassitude and responded with an economic retaliation against Russia, backed up by multinational corporations, largely unparalleled in modern times.

That economic retaliation is likely to plunge Russia into a severe economic depression that could erase 25% of its GDP, but the Russian economy is not a major global force. Its GDP is the 11th largest in the world, with most of that concentrated in oil production, which makes it barely the size of Texas with five times the population. It exports around 7 million barrels of oil a day, (though only about 600,000 to the U.S.), but that and wheat production plus a few specialty metals such as nickel are are the only areas that Russia carries global economic weight.

Vehicles line up for gasoline at service station during gas shortages, May 3, 1979 in Long Beach, California.
Getty Images/Bob Riha, Jr.

In the 1970s, however, OPEC controlled nearly 60% of the world oil supply, compared to Russia’s 10% today, and the 1973 embargo saw the price of oil quadruple in a few weeks, compared to the 25% increase now in the weeks since the Ukraine invasion. The energy shock in 1973-1974, followed by subsequent supply shocks in the subsequent years, was by orders of magnitude greater than Russia today represents.

While Western economic sanctions against Russia will have a devastating impact on the Russian economy, even the complete removal of Russian commodities would not have anywhere near the global impact of the OPEC embargo in the 1970s.

Markets that trade these commodities are understandably volatile in the face of the sudden disruptions combined with lack of clarity about duration and extent, but that will likely fade as the world adjusts to the removal of several million barrels of oil a day from Russia (out of nearly 100 millions barrels a day globally). It will take longer for global markets to compensate for the loss of Russian nickel, wheat and natural gas, but if the past four weeks are a guide, the negative effects are proving less than feared. After weeks of wild swings in prices, both equity and commodity markets stabilized last week, with oil going back down below $100 a barrel and equities staging their best week since 2020. More volatility may lie ahead, but these moves do suggest that markets have grappled with worst-case scenarios and ruled them out, for now.

The intensity of inflation has rattled many, but even today’s elevated levels are mild compared to the stagflation years. Inflation from the mid-1970s through 1980 were in the double-digits, reaching 14.5% in the summer of 1980. The annual rate of inflation of the U.S. was 4.7% for all of 2021. That has been accelerating the past few months, with monthly reading above 7%, but is still nowhere near the stagflation years. Unemployment was worse then than now; interest rates also reached double digits, with a 30-year home mortgage reaching 11.2% by the end of 1979, making even reasonably priced homes hard for a middle-class family to afford.

Could these numbers rapidly change and start resembling the 1970s? Certainly. But the relative strength of not just the U.S. economies but also the major European ones augurs against that. The trillions of dollars injected by governments because of COIVD-19 has led to consumers having less debt and more income, even with inflation starting to erode those gains. As a result of COVID spending, governments today have more debt than ever, but rates remain historically low, incredibly low actually, which means that interest to service that debt is less than it was in the 1980s when government debt was much lower.

Ukraine changes the mood of markets and colors attitudes about the present and future outside of Ukraine, but the painful drama of Ukraine does not translate into an economic crisis for the rest of the world. The crushing the Russian economy has been a surprise, but the relative unimportance of Russia as a global economic actor is in part what has made it possible for Western nations and companies to respond so powerfully.

Things may indeed get worse economically, not to mention politically. The risks seem more palpable now, hence the sudden visceral sense that we may be seeing Seventies redux. Even so, we have quite a ways to go before the reality of the Seventies becomes ours. And no matter how bad it gets, disco and leisure suits are likely to remain safely in the past. 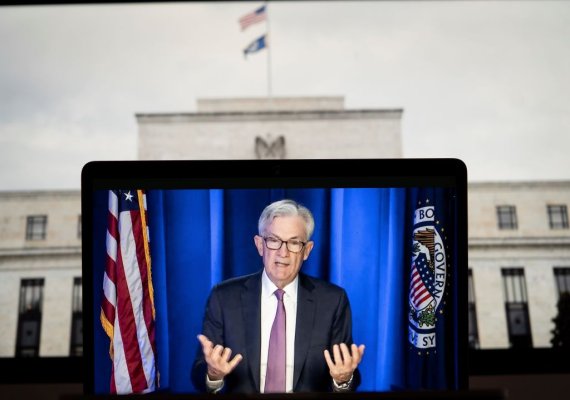 The Fed Must Do Much More to Fight Inflation—And Fast
Next Up: Editor's Pick