Exclusive: Romania's Prime Minister on How NATO Can Navigate This 'Stark New Reality'

There are plenty of national heroes that are tricky for outsiders to properly appreciate. Even so, Romania’s Vlad Țepeș, or Vlad the Impaler, takes some beating. A Wallachian prince from the 15th century, Vlad had a reputation for boiling babies and drinking blood, though his trademark was impaling a foe on a stake in the ground from anus to armpit, thus missing any major organs and prolonging death for up to an agonizing 48 hours. Following a battle against Ottoman soldiers in 1462, Vlad left a screaming forest of impaled thousands as a warning to pursuing troops set on conquering his lands.

Barbaric as these acts certainly were, ask people in Romania’s stately capital Bucharest today about Vlad’s deeds and they will shrug and offer a standard reply: that’s what happens if you invade a person’s home. It is, of course, a sentiment that has been galvanized by the war launched by Russian President Vladimir Putin in neighboring Ukraine, where millions have fled indiscriminate bombing, more than 500,000 of them across the 400 mi. shared border into Romania.

Romanian Prime Minister Nicolae Ciucă may not endorse Vlad’s methods but tells TIME that he shares the widely held appreciation for how he “played a major role in defending Europe and its values.” There was, Ciucă insists in an exclusive written interview, more to the man whose family name, Dracula, inspired Irish novelist Bram Stoker’s vampiric creation. “Beyond the military strategies always used for defense, never for the conquest of other territories, Romanian rulers were also brilliant diplomats, visionaries, peace-seekers.”

Read More: A Ukrainian Photographer Documents the Invasion of His Country

The world needs such skills today. How to stop the “illegal, unprovoked and brutal aggression against Ukraine,” as Ciucă, a former army general, describes it, is “the biggest test since the end of the Cold War,” promising to “open a new chapter of European history.” Ciucă says that NATO needs to radically broaden and embolden its mandate to meet this next generation threat.

On Thursday, Romania’s prime minister will join U.S. President Joe Biden and other world leaders for an extraordinary NATO meeting and E.U. summit in Brussels. Biden’s goal, White House spokeswoman Jen Psaki told reporters, “is to meet in person face-to-face and talk about and assess where we are at this point in the conflict.” Ciucă, however, is blunter about the stakes, which are no less than “the future of the democratic world and the rules-based international order.”

Even if few Americans might be able to find Romania on a map, the nation of 19 million is set to have a notable geostrategic role to help navigate the aftermath of Putin’s invasion—what Ciucă calls a “stark new reality.” Even under the rule of communist dictator Nicolae Ceaușescu, Romania was arguably the most independent and Western-looking of the Soviet satellite states, and that deep mistrust of Russian encroachment has only swelled since its 1989 democratic revolution.

Although most famous for its forested Transylvania region and picture-postcard medieval towns, Romania is also the E.U.’s leading grains exporter, whose potential to boost capacity could help mitigate global shortages owing to disruptions to Ukrainian production. It also has significant underutilized oil and gas reserves, which could go a small way to help wean Europe off its Russian energy dependence that now funds the Kremlin’s war machine.

More immediately, Romanians have opened their hearts and homes to the influx of refugees: Church groups, civil society, businesses, and regular people have flocked to border crossings to offer a ride or box of groceries. “We don’t just say we are good neighbors here,” Ciucă says proudly. “We show it!”

Ciucă’s resumé makes him serendipitously well suited for a conflict role, despite assuming the job during peacetime 4 months ago. Born in the tiny village of Plenița by the southern border with Bulgaria, he served as chief of Romania’s armed forces from 2015 to 2019, and then Defense Minister from 2019 to 2021. His elevation to head of government in November was a messy, uninspiring affair: he emerged as the least objectionable compromise candidate between bickering factions. Even then, Ciucă had to fend off allegations that he plagiarized almost a third of his doctoral thesis. (He has denied it).

Yet it is Ciucă’s close connections with the U.S. military that have proven “invaluable” given the present tumult, says a senior Western diplomat in Bucharest, who asked to remain anonymous due to official protocol. Ciucă served alongside U.S. forces in the wars of Iraq and Afghanistan, earning recognition in the International Hall of Fame at the U.S. Army War College, where he studied in 2006. This year marks 25 since the signing of Romania’s Strategic Partnership with the U.S. “Security is probably the strongest pillar of the [U.S.-Romania] relationship,” says the diplomat. “Our military and Romania’s military are very interoperable. A lot of their officers have gone to our schools.”

Romania has been a NATO member since 2004, joining the E.U. three years later. The country is welcoming thousands of troops from alliance members, including the U.S., France, Belgium and Portugal. As well as having the longest land border with Ukraine of any NATO state, Romania has a de facto maritime boundary with Russia since the 2014 annexation of Crimea. As such, Romania’s role has swelled in terms of the collective defense of the Black Sea region, NATO’s Eastern Flank and the whole Euro-Atlantic space, says Ciucă. “We are at the fulcrum of both the security and defense aspects of this crisis, but also of its tragic humanitarian dimension.”

Read More: The E.U. Is United Against Russia–With One Notable Exception

Ciucă’s praise of the NATO alliance is perhaps unsurprising. He says his missions in Iraq and Afghanistan were “essential stepping stones” for Romania’s U.S. and NATO-aligned security and defense posture. But while “both were difficult and complex,” he explains, “they were nothing like the challenge represented by the unprovoked invasion of Ukraine by Russia. Hundreds of thousands of forces and the vast capabilities represent a threat of a different magnitude.”

Ciucă belies the stereotype of the combat-hungry general. He stresses that NATO is a defensive alliance and says it does not serve Ukraine or anyone else to risk an even larger conflict. Ukrainian President Volodymyr Zelensky has repeatedly pleaded with the U.S. and NATO to enforce a no-fly zone to prevent Russia’s aerial assault on his cities. Ciucă is full of praise for his counterpart—“as somebody that stared down the barrel of a weapon, I respect his courage and conviction,” he says—though warns that a no-fly zone would necessitate direct conflict between Russia and NATO and would be a price too high. “However dangerous and odious Russia’s actions are, NATO needs to avoid playing into an escalatory logic,” he says.

That does not mean there should be inaction, however. The Ukraine war has served as a wake-up call to many NATO members, including Romania, which on March 1 boosted defense spending from 2% to 2.5% of GDP. Two days later, Poland unveiled a hike to 3% in 2023. And on Feb. 27, Germany surprised many by announcing an extra $111 billion on defense in 2022, tripling its annual budget. Other defense dawdlers like Italy and Spain are following suit. “Let’s be clear, defense starts at home,” Ciucă says.

It’s a shift in tenor welcomed by Romanians who have long sounded the alarm about Russia’s intentions. In a late 2020 poll, 30% of Romanian respondents said that Russia posed a direct threat to their country—one of the highest rates in Eastern Europe. “There’s been dissatisfaction with specific E.U. member states, like Germany and Italy, that have opposed the full range of sanctions against Russia, or that have over time been in favor of doing business with Russia and so propped up the Putin regime,” says Oana Popescu-Zamfir, director of the Bucharest-based Global Focus think tank.

Still, it’s unclear whether the newfound urgency is enough: Since 2000, Russia’s defense spending has increased by 183% and China’s by 495%. Ciucă says that NATO must rethink its Strategic Concept—setting out the bloc’s fundamental security tasks, challenges and opportunities—given this shift: the structure and elements of its posture from the Baltic to the Black Sea to face the new reality of a massive Russian troop deployment in Ukraine and Belarus. NATO also needs to better prepare for combat “in cyberspace and in space,” he says, urging investment in fields like quantum computing, artificial intelligence, and autonomous weapons.

But NATO also needs to rethink not only how, but also what it defends. Hybrid actions like covert influence—lobbying lawmakers and buying influential sporting franchises—and massive disinformation campaigns, as well as repeated cyber-attacks against E.U. and NATO countries, should be considered as part of a wider campaign against its citizens’ democratic values and principles and warrant a robust response, Ciucă says. Strengthening strategic communications, while combating malign influence campaigns, should be “an essential part of NATO’s adaptation,” says Ciucă.

It’s clear that Ciucă has NATO in his bones. Still, he can’t hide the frustration palpable among Eastern Europeans that warnings regarding Russian aggression weren’t taken seriously enough. In praising Zelensky, he says the Ukrainian president “provides now for the Ukrainians and Europe a stark contrast to the hesitations, willingness to eschew responsibilities and avoiding hard and difficult decisions that often characterized the West’s dealings with Russia.”

The burning question for the world—whether or not Russia’s gambit in Ukraine is successful—is whether it’s possible to deal with Russia with Putin as leader. The Russian President’s willingness to target civilians, increasingly unhinged speeches railing at West-leaning “scum and traitors,” and threats to unleash nuclear war renders fulsome reengagement meaningless. “Normalization of relations with the world requires rebuilding trust,” says Ciucă. “Seeing the sort of Orwellian propaganda and unwillingness to negotiate even to ensure the safety of civilians leaves doubts as to that possibility in the near future.”

But the alternative, barring a palace coup or other extraordinary change of leadership in the Kremlin, is shunning Russia long-term. That, however, is also highly undesirable. Ciucă emphasizes that Russia had for years been a valued partner of the E.U., with institutions like the now suspended NATO-Russia council established to deepen security cooperation. “Russia is an important country. Russia is also a European country,” says Ciucă, emphasizing “profound and extensive” economic interactions. “Nobody wants to ostracize Russia.”

Still, Putin’s actions leave few other options, Ciucă says. “An imperialist regime that operates on the logic of spheres of influence and limited sovereignty, that brutally invades neighboring countries, foments separatism and annexes neighboring countries’ territory, curtails domestic and regional democracy, deploys hybrid actions against other countries, cannot be a respected or even trusted partner.”

It’s a burning quandary though perhaps one that can be tabled for now. More immediately, the question for Biden, Ciucă and other leaders in Brussels will be how to stop the bloodshed. Sanctions and supplying weapons may have stalled the Russian advance for now but every new escalation will bring calls to deepen involvement. “President Zelensky and the whole of Ukraine are very much doing their part,” he says. “We must continue to do ours.” 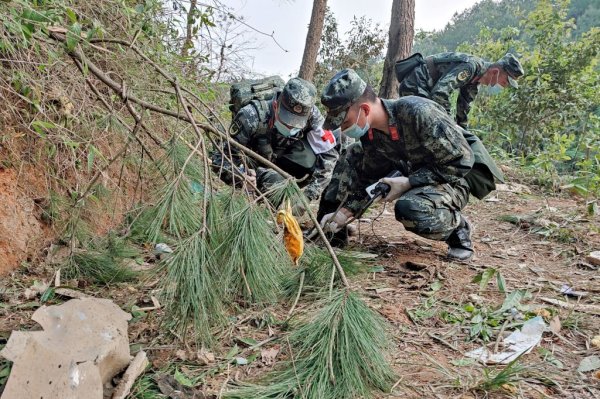 China Eastern Crash: Plane Dived at Nearly the Speed of Sound
Next Up: Editor's Pick